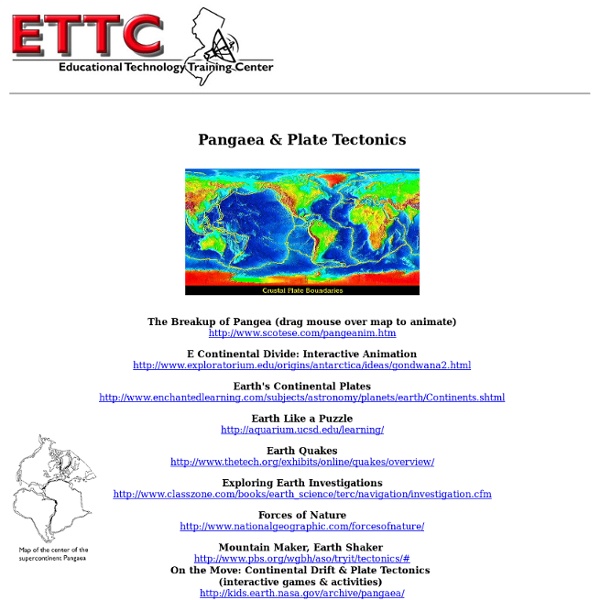 Geography Site: Plate Tectonics Continental Drift and Plate Tectonics Continental Drift As far back as 1620, Francis Bacon spotted that the west coast of Africa and the east coast of South America looked as if they would fit together, like pieces of a jigsaw puzzle. Between then and 1912 other people identified further similarities between other continental coastlines, but it was only in 1912 that Alfred Wegener (left) published a theory to explain why the Earth looked like a huge jigsaw puzzle. He suggested that a very long time ago all the land that covered the Earth had been joined together into one huge continent. He named this landmass, Pangaea, and suggested that millions of years ago this supercontinent had somehow broken up. Firstly, he was able to show that fossils of a small reptile called Mesosaurus were found only in South Africa and Brazil. Secondly, he realised that the rocks in South Africa and southeast Brazil were very similar, both in age and structure. Other discoveries added to his list of evidence.

Plate tectonics Plate tectonics Image source: Pacific Ring of Fire by Gringer (Wikipedia) Some mountains are still growing! Did you know that the mountains of New Zealand are still slowly growing higher and that Australia is gradually moving towards the... Science Year: 9 Tectonic boundaries: convergent How does the movement of tectonic plates affect the Earth's surface? Some mountains are still growing! Science Year: 9 Tectonic boundaries: convergent Tectonic boundaries: challenge Challenge your understanding of tectonic boundaries. Piecing together the puzzle of plate tec... In this clip, seismologist Roderick Stewart provides some firsthand information about data that helps us understand volcanic and... Geography Science Years: 8,9 Tectonic plates move slowly with massive... The Earth's tectonic plates move just a few millimetres every year. Geography Year: 8 Sleeping giant awakens on Montserrat Ocean deep, mountain high Ocean trenches are the deepest parts of the ocean. What huge forces cause tsunamis? Follow us:

NASA Earth Observatory : Home World War 2 for Kids When did World War Two begin? World War Two in Europe began on 3rd September 1939, when the Prime Minister of Britain, Neville Chamberlain, declared war on Germany. It involved many of the world's countries. Why did the Second World War start? why second world war The Second World War was started by Germany in an unprovoked attack on Poland. When did World War Two end? The War ended in the Summer of 1945. How did people protect themselves during the war? Children and some women were evacuated from the big cities into the countryside. Earth Earth Earth is a complex, dynamic system we do not yet fully understand. The Earth system, like the human body, comprises diverse components that interact in complex ways. We need to understand the Earth's atmosphere, lithosphere, hydrosphere, cryosphere, and biosphere as a single connected system. Our planet is changing on all spatial and temporal scales. The purpose of NASA's Earth science program is to develop a scientific understanding of Earth's system and its response to natural or human-induced changes, and to improve prediction of climate, weather, and natural hazards. This is a composite image of the North African Continent. A major component of NASA’s Earth Science Division is a coordinated series of satellite and airborne missions for long-term global observations of the land surface, biosphere, solid Earth, atmosphere, and oceans.

Datasets | Science On a Sphere Playlist Builder ../ftp_mirror/atmosphere/lightning/media/thumbnail_small.jpg Annual Lightning Flash Rate Map dataset.php?id=6 Annual Lightning Flash Rate Map Description Before scientists had satellites to detect and measure lightning frequency, it was thought that there were globally 100 lightning flashes per second, an estimate that dates back to 1925. It is clear from this map that the distribution of lightning flashes around the world is uneven. Notable Features Highest lightning flash frequency is 159 flashes per year in Central Africa Florida has the highest flash frequency in the United States The color variation indicates the flash frequency according to the color bar Use lighting Details Media Preview Interactive Sphere View Movie .. 20 Wonderful Online Museums and Sites for Virtual Field Trips to Use in Class January 27, 2014 Yesterday when I was working on the list of iPad apps that teachers can use with their students to make virtual field trips, it dawned on me to compile another list of web based platforms for both online museums and virtual field sites that can be used with students in class. After scouring the web for hours I finally landed on the selection below. Have a look and as always share with your students and colleagues. 1- National Portrait Gallery The Smithsonian’s National Portrait Gallery tells the history of America through individuals who have shaped its culture. The Smithsonian Institution—the world’s largest museum and research complex—includes 19 museums and galleries and the National Zoological Park. 3- The Field Museum The Museum’s 25 million objects—from Antarctic dinosaurs to Peruvian plants, from Inuit masks to Tanzanian mammals—are the lifeblood of the Museum, and an unparalleled resource to the world scientific community. 5- The British Museum 6- Science Museum

Climate Change, Deforestation, Biomes and Ocean Currents, Plankton, Endangered Species - Earth Web Site Click for more detail Thermohaline Change Evidence is growing that the thermohaline current may be slowed or stopped by cold fresh water inputs to the Arctic and North Atlantic oceans. This could occur if global warming is sufficient to cause large scale melting of arctic sea ice and the Greenland ice sheet. Such a change in the current may be gradual (over centuries) or very rapid (over a few years). Either would cause planet wide changes in climate. "Diatoms (a kind of phytoplankton) are estimated to "scrub" roughly as much CO2 from the atmosphere each year as all the world's rainforests. "Net primary productivity is the mass of plant material produced each year on land and in the oceans by photosynthesis using energy from sunlight. Biodiversity is the variety of life found at all levels of biological organization, ranging from individuals and populations to species, communities and ecosystems. Click for more detail What are they? Ecosystem and Biodiversity Text Sources: 1.