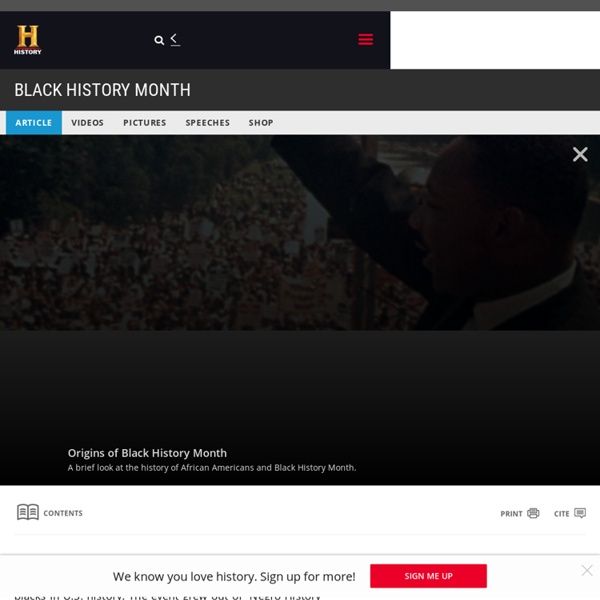 The story of Black History Month begins in 1915, half a century after the Thirteenth Amendment abolished slavery in the United States. That September, the Harvard-trained historian Carter G. Woodson and the prominent minister Jesse E. Moorland founded the Association for the Study of Negro Life and History (ASNLH), an organization dedicated to researching and promoting achievements by black Americans and other peoples of African descent. Known today as the Association for the Study of African American Life and History (ASALH), the group sponsored a national Negro History week in 1926, choosing the second week of February to coincide with the birthdays of Abraham Lincoln and Frederick Douglass. The event inspired schools and communities nationwide to organize local celebrations, establish history clubs and host performances and lectures. In the decades the followed, mayors of cities across the country began issuing yearly proclamations recognizing Negro History Week.

Black history in Europe, a short story *African (Black) history in Europe from 1400 is briefly recalled on this dates Registry. To address the story of black people in Europe, certainly addresses the history of slavery and the history of European colonialism. The relationship between the two continents began with mutual respect and curiosity. For the last 600 years Africans, African-Americans, African-Europeans, Europeans, and European-Americans are still paying for the results. Free ESL (English as a Second Language) Lesson Plans to Download This page was originally designed to share my materials with other English teaching assistants in France, especially those who have no experience in teaching ESL yet. I've also included worksheets that I used for private English lessons in France as well as some of the materials I used in my ESL classes in the United States. Feel free to use them as you'd like. Some of the lessons listed under the Assistant section can also be used for private lessons and vice versa.

Write an "I Have a Dream" Speech! Racial barriers were shaken with Supreme Court decisions like Brown v. Board of Education in 1954, which ruled that separate schools for blacks and whites were “inherently unequal.” Still, in the fifties and sixties, equality was far from a reality. In August 1963, Martin Luther King Jr. helped organize the March on Washington. On the steps of the Lincoln Memorial, King delivered his “I Have a Dream” speech, and his passionate words signaled the push for desegregation and the Civil Rights Act of 1964. The civil rights leader proclaimed: “I have a dream that one day on the red hills of Georgia, the sons of former slaves and the sons of former slave owners will be able to sit down together at the table of brotherhood.”

Rosa Parks Bus - The Story Behind the Bus On December 1, 1955, Rosa Parks, a 42-year-old African American woman who worked as a seamstress, boarded this Montgomery City bus to go home from work. On this bus on that day, Rosa Parks initiated a new era in the American quest for freedom and equality. She sat near the middle of the bus, just behind the 10 seats reserved for whites. Soon all of the seats in the bus were filled. When a white man entered the bus, the driver (following the standard practice of segregation) insisted that all four blacks sitting just behind the white section give up their seats so that the man could sit there.

Education World: Write Your Own "I Have a Dream" Speech Brief Description Students use a fill-in-the-blanks worksheet to write speeches that imitate the form and content of Dr. King's famous "I Have a Dream" speech. Don't miss another great EdWorld lesson: What Makes a Great Speech? Martin Luther King Jr. - Biography - Civil Rights Activist, Minister Martin Luther King Jr. was a Baptist minister and social activist, who led the Civil Rights Movement in the United States from the mid-1950s until his death by assassination in 1968. Synopsis Martin Luther King Jr. was born on January 15, 1929, in Atlanta, Georgia. King, a Baptist minister and civil-rights activist, had a seismic impact on race relations in the United States, beginning in the mid-1950s. Among his many efforts, King headed the Southern Christian Leadership Conference. Through his activism and inspirational speeches he played a pivotal role in ending the legal segregation of African-American citizens in the United States, as well as the creation of the Civil Rights Act of 1964 and the Voting Rights Act of 1965.

6ème 4 - Freshmen - Jim Ricotti, the… - Lesson: how to… - Presenting people… - Nationalities and… - Countries,… - Spelling bee (the… - Spelling Bee! - Class rules - Dos… - Classroom English… - Classroom English - Akeelah and the Bee… - Akeelah and the Bee Wednesday 24 october 2012 3 24 /10 /Oct /2012 15:26 - Posted in: 6ème 4 - Freshmen Hi guys, My Version of "I Have A Dream Speech" I have a dream… that one day this nation will grow up to realize what kind of a world we have created. We have taken this beautiful world for granted to many times and I say it’s time that somebody stood up for what they believe in and say enough is enough! I have a dream… that one day our great and beautiful nation will come together as one and fix the mess that we have left behind in our tracks. It seems to me that everyone has forgotten what our great and beautiful nation is all about.

Martin Luther King Jr. - Black History The second child of Martin Luther King Sr. (1899-1984), a pastor, and Alberta Williams King (1904-1974), a former schoolteacher, Martin Luther King Jr. was born in Atlanta, Georgia, on January 15, 1929. Along with his older sister, the future Christine King Farris (born 1927), and younger brother, Alfred Daniel Williams King (1930-1969), he grew up in the city’s Sweet Auburn neighborhood, then home to some of the most prominent and prosperous African Americans in the country. A gifted student, King attended segregated public schools and at the age of 15 was admitted to Morehouse College, the alma mater of both his father and maternal grandfather, where he studied medicine and law. Although he had not intended to follow in his father’s footsteps by joining the ministry, he changed his mind under the mentorship of Morehouse’s president, Dr.

Stand up for your rights! Welcome back! I hope you are ready for a new project? Before you move on I want you to spend a minute or two thinking of a person who fights for something. Is it a famous person? Is it your grandfather? Is it your cousin or perhaps your teacher? Rodney King - Biography - - Biography.com When a mostly white jury acquitted the police officers who were caught on video beating Rodney King, it set off the L.A. riots of 1992. Synopsis Born in Sacramento, California, on April 2, 1965, Rodney King was caught by the Los Angeles police after a high-speed chase on March 3, 1991. Speech - I have a dream... SpeechI will now present the whole theme that we are going to work with during the next few weeks. Don't worry - I will give you instructions while we are working as well.You work together in your groups with: 1. The magic of three Watch the film about the Magic of three: 2. How to write a speech Now watch the film I have made for you. The key words to remember are: A FOREST, TONE, BODY LANGUAGE 3. Martin Luther King - I have a dream Watch the Martin Luther King speech again.

Billie Holiday's Song ''Strange Fruit'' (Lesson Plan Estimated Time of Completion: 3 to 5 class periods with some additional time for students to complete group projects. This lesson focuses on Billie Holiday's signature song, "Strange Fruit," a protest song Lewis Allen (Abel Meeropol) wrote in 1938 about the ongoing and intransigent problem of lynching in the American South. After asking students to assess the role music plays in their own lives, the lesson introduces some background information about lynching. The bulk of the lesson is document-based.