Black Panther film fuels calls for release of jailed political activists. When he was released from prison in 2014, Sekou Odinga felt like he was falling from the sky into a foreign land. 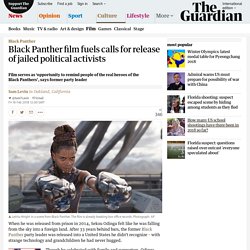 After 33 years behind bars, the former Black Panther party leader was released into a United States he didn’t recognize – with strange technology and grandchildren he had never hugged. Though he celebrated with family and supporters, Odinga, 73, also remained mindful of the many other civil rights activists who weren’t so lucky: “You always feel like you don’t want to leave nobody behind.” This weekend, his advocacy group is gathering outside movie theaters across New York City to educate crowds at sold-out screenings of Black Panther about the real-life Black Panthers who fought for black liberation in the 1960s and 1970s – some of whom have also been fighting for their own freedom from incarceration for decades. “We need people to understand that these are not simply criminals who committed some heinous crime being punished,” said Cyril.

. … we have a small favour to ask. Malcolm X’s Influence on the Black Panther Party’s Philosophy. Following Malcolm X‘s assassination in 1965, it has been suggested by some historians that the Black Panther Party used his philosophy of gaining freedom “by any means necessary” both as a justification of their methods and as a means of inspiring other African Americans to join their cause. 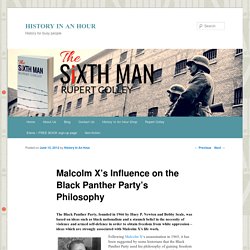 Although Huey Newton later stressed in his autobiography a belief that the party had not done things the way that Malcolm X would have done them had he lived beyond 1965, the fact that Malcolm X had a huge influence on the philosophy of the party is virtually indisputable. Bobby Seale It is also clear is that Malcolm X had a strong influence on the individual, personal philosophies of key Black Panther members, especially the two founding members. Both Huey P. Newton and Bobby Seale were drawn in by Malcolm’s speeches and agreed with many of the revolutionary ideas he expressed within them. Women in the Civil Rights Movement - Civil Rights History Project. Many women played important roles in the Civil Rights Movement, from leading local civil rights organizations to serving as lawyers on school segregation lawsuits. 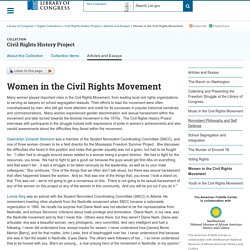 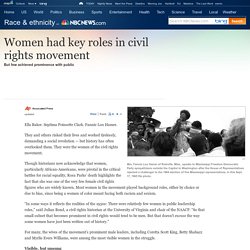 Septima Poinsette Clark. Fannie Lou Hamer. They and others risked their lives and worked tirelessly, demanding a social revolution — but history has often overlooked them. ‘Stereotypes of the Black Panthers are far from the truth’: marching in Philadelphia, 1971. When the Black Panthers came to west Philadelphia, their boldness and courage struck a chord with my friends and me. 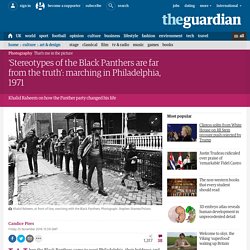 They handed out papers with graphic depictions of black men and women standing up for themselves and demanding freedom. I was 17, and I’d never seen anything like it. I grew up in a predominantly black community of working-class people. Many were children or grandchildren of people who had migrated from the south. Before I joined the Black Panther party, I’d failed school. My first step was going to a political education class. In this photograph, I’m at the front by chance: I wasn’t in any position of leadership. Eyes On The Prize - (Part 12) A Nation of Law 1968–1971. New FBI files show wide range of Black Panther informant’s activities. "To Determine the Destiny of Our Black Community": The Black Panther Party's 10-Point Platform and Program. 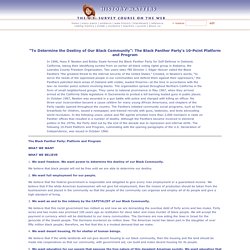 Newton and Bobby Seale formed the Black Panther Party for Self-Defense in Oakland, California, taking their identifying symbol from an earlier all-black voting rights group in Alabama, the Lowndes County Freedom Organization. Two years later, FBI Director J. Edgar Hoover called the Black Panthers “the greatest threat to the internal security of the United States.” Created, in Newton’s words, “to serve the needs of the oppressed people in our communities and defend them against their oppressors,” the Panthers patrolled black areas of Oakland with visible, loaded firearms—at the time in accordance with the law—to monitor police actions involving blacks. 'The Black Panthers Vanguard Of The Revolution' Full Film Documentary 2015. The Black Power Mixtape 1967 1975 Documentary. Angela Davis.

1966 CBS NEWS SPECIAL REPORT: "BLACK POWER/WHITE BACKLASH" The Dawn Of Black Power - 1970. The Black Power Movement. Crosby ch08 final. The View from the Trenches. By Charles Payne To paraphrase Julian Bond of the Student Nonviolent Coordinating Committee (SNCC), American popular and academic culture has been permeated by a master narrative about the movement. 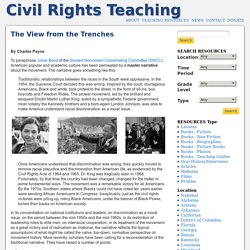 The narrative goes something like this: Traditionally, relationships between the races in the South were oppressive. In the 1954, the Supreme Court decided this was wrong. Inspired by the court, courageous Americans, Black and white, took protest to the street, in the form of sit-ins, bus boycotts and Freedom Rides. Once Americans understood that discrimination was wrong, they quickly moved to remove racial prejudice and discrimination from American life, as evidenced by the Civil Rights Acts of 1964 and 1965. 1. 2. 3. 4. Protest in front of the White House in 1933 demanding the freedom of the imprisoned Scottsboro Nine, led by Mother Patterson, the mother of accused Heywood Patterson. © Bettmann/CORBIS Door to door conversations about voter registration. 5. 6. It is not an either/or choice. Different Perspectives on the Civil Rights Movement. MLK legacy. The King holiday was both cause and effect of this selective appropriation. 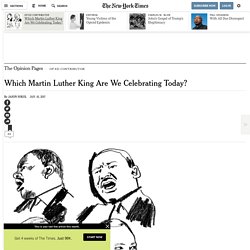 Congressman John Conyers, a Democrat from Michigan, first proposed a holiday bill in 1968, and he offered the legislation virtually every year thereafter. In 1983, it finally neared passage. Though Reagan, by then president, opposed the holiday, congressional Republicans realized that endorsing the bill could help to burnish their party’s civil rights bona fides.