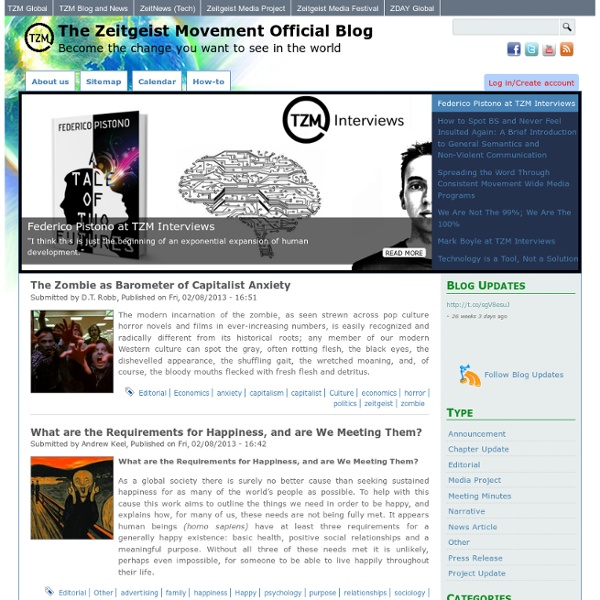 Being Somewhere - Low Impact Living ZDay The Zeitgeist Movement Global Site Zeitgeist Information Starting Over In his famous , Richard Feynman presented this interesting speculation: Fascinated by Feynman’s question, Seed put a similar one to a number of leading thinkers: “Imagine—much as Feynman asked his audience—that in a mission to change everyone’s thinking about the world, you can take only one lesson from your field as a guide. In a single statement, what would it be?” Here are their answers: Media Project TZM - Orientation Download Here The Zeitgeist Movement Defined (Full PDF Book) Who profits? Financial Data to see financial transparency info. About: The Zeitgeist Movement Defined is the official, representative text of the global, non-profit sustainability advocacy organization known as The Zeitgeist Movement (TZM). This tediously sourced and highly detailed work argues for a large-scale change in human culture, specifically in the context of economic practice. However, in the early 21st century, these problems have risen prominently, taking the consequential form of increasing social destabilization and ongoing environmental collapse. While largely misunderstood as being "utopian" or fantasy, this text walks through, step by step, the train of thought and technical industrial reordering needed to update our global society (and its values) to enable these profound new possibilities. If you find a Typo, please email media@thezeitgeistmovement.com (1) Preface Document Structure The Organism of Knowledge About

Ayn Rand | Ayn Rand, Objectivism, and Individualism Ayn Rand is America’s most controversial individualist. She was a bold woman who produced brilliant works fusing fiction and philosophy. Her best-selling novels, like Atlas Shrugged and The Fountainhead, have sold millions of copies and continue to influence independent thinkers and celebrities the world over, from Wikipedia's Jimmy Wales to Angelina Jolie and Hugh Hefner. My philosophy, in essence, is the concept of man as a heroic being, with his own happiness as the moral purpose of his life, with productive achievement as his noblest activity, and reason as his only absolute. — Ayn Rand, Appendix to Atlas Shrugged Rand cut a striking figure, with her long-stemmed cigarette holder and intense gaze. She penned philosophical non-fiction works of such originality and power that she was credited by a small group of stunned intellectuals as having single-handedly solved an ancient philosophical puzzle. The new philosophy which she founded through her books and essays is called Objectivism.