A Conversation with Mark Lilla on His Critique of Identity Politics. The Trump campaign and Presidency have sparked not only an ever-expanding literature of biography, investigation, and pre-history but also a variety of polemics and essays—pointed attacks on the President, his character, his intentions, his abuses, and the political climate that he has created. 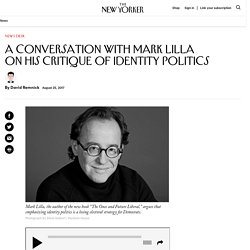 Timothy Snyder, a historian at Yale who is best known in academic circles for his comprehensive studies of modern Europe, recently published a best-selling polemic called “On Tyranny: Twenty Lessons from the Twentieth Century,” a primer on authoritarian tendencies of the past and how to resist them now. In October, Ta-Nehisi Coates will publish “We Were Eight Years in Power: An American Tragedy,” a series of essays on race, written during the Obama era, that concludes with the current predicament: “The white supremacy swirling around Trump is neither notional nor symbolic but is the very core of his power.”

LILLA: Well, I wouldn’t call it a conversation. It’s an overused word. The “Indivisible” Movement’s Key Strategy: Focus on Your Own Members of Congress by Karin Kamp. After the 26-page Indivisible Guide was put online as a Google doc in mid-December, it quickly went viral — former US Labor Secretary Robert Reich and actor/activist George Takei tweeted it — and Google’s servers kept crashing, rendering it virtually useless. 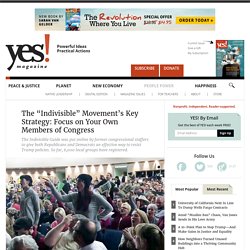 Created by a group of former congressional staffers, the guide, now a website, provides specific tactics for fighting against President Donald Trump’s agenda by taking a page from the tea party’s playbook. So far, over 6,000 local groups have registered at IndivisibleGuide.com, agreeing “to resist Trump’s agenda, focus on local, defensive congressional advocacy and embrace progressive values.” The guide has been downloaded over a million times and the site has already had over 10 million page views. Now Is the Time for "Nobodies": Dean Spade on Mutual Aid and Resistance in the Trump Era. Demonstrators march to protest the election of Donald Trump on November, 19, 2016. 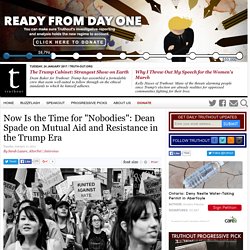 (Photo: CaliCal / Flickr) With only days to go until Donald Trump and his bevy of far-right appointees take the White House, communities across the United States are preparing for a potential escalation in immigration raids, police repression, Islamophobic targeting, corporate exploitation and climate chaos. Many of those taking to the streets to protest fascism and preparing mutual defense plans in their neighborhoods were also actively organizing throughout the Obama years, which saw a record number of deportations, open-ended wars and the highest levels of imprisonment in the world. Now Is the Time for "Nobodies": Dean Spade on Mutual Aid and Resistance in the Trump Era.

What Successful Movements Have in Common. The declaration of surrender was touted as a triumph: “Microsoft Loves Linux,” the headline read, but just a decade earlier, the firm’s then CEO, Steve Ballmer, had called Linux a cancer. 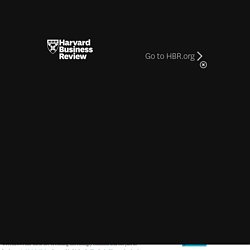 The all-powerful tech giant had lost and lost badly — to a ragtag band of revolutionaries, no less — but still seemed strangely upbeat. Overthrows like these are becoming increasingly common and not just in business. Eric Hoffer and the Creation of Fanatical Mass Movements. What is the nature of a true mass movement? 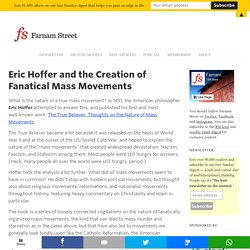 In 1951, the American philosopher Eric Hoffer attempted to answer this, and published his first and most well-known work: The True Believer: Thoughts on the Nature of Mass Movements. The True Believer became a hit because it was released on the heels of World War II and at the outset of the US/Soviet Cold War, and hoped to explain the nature of the “mass movements” that created widespread devastation: Nazism, Fascism, and Stalinism among them. Most people were still hungry for answers. (Heck, many people all over the world were still hungry, period.) Hoffer took the analysis a bit further. Against Activism. Almost a decade ago I attended a conference called “1968” at a nondescript college in New Jersey. 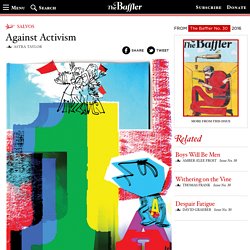 Mark Rudd, a student radical turned community college math instructor living out his retirement in New Mexico, delivered the keynote. Rebecca Solnit on Hope in Dark Times, Resisting the Defeatism of Easy Despair, and What Victory Really Means for Movements of Social Change. “There is no love of life without despair of life,” wrote Albert Camus — a man who in the midst of World War II, perhaps the darkest period in human history, saw grounds for luminous hope and issued a remarkable clarion call for humanity to rise to its highest potential on those grounds. 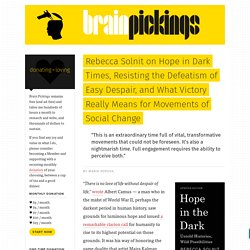 It was his way of honoring the same duality that artist Maira Kalman would capture nearly a century later in her marvelous meditation on the pursuit of happiness, where she observed: “We hope. We despair. Liquid Democracy. Concensus process. CONSENSUS (Direct Democracy @ Occupy Wall Street) Theory & Event - Semantic, Pragmatic, and Affective Enactment at OWS. In lieu of an abstract, here is a brief excerpt of the content: The Occupy movement shows us how the semantic, pragmatic, and affective - meaning, action, and feeling - are intertwined in all collective practices. 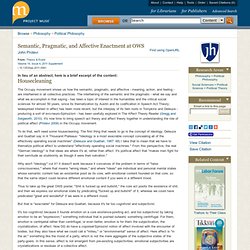 The intertwining of the semantic and the pragmatic - what we say and what we accomplish in that saying - has been a topic of interest in the humanities and the critical social sciences for almost 50 years, since its thematization by Austin and its codification in Speech Act Theory; widespread interest in affect has been more recent, but the interplay of its twin roots in Tompkins and Deleuze - producing a sort of evo-neuro-Spinozism - has been usefully explored in The Affect Theory Reader (Gregg and Seigworth, 2010). It's now time to bring speech act theory and affect theory together in understanding the role of political affect (Protevi 2009) in the Occupy movement. Participation and communication pt. two: the stages of community building. The main reason for communities to break apart is conflict; conflict mostly caused through a lack of communication.

When people get together and discover their freedom, they feel like there is new meaning in their collective but also individual lives. They mostly experience some kind of deep harmony. Scott Peck in his book ‘A different drum’ names this the first stage of community building, where we discover and live our similarities and common interests and goals. Quick guide on group dynamics in people’s assemblies. This text has been prepared by the Commission for Group Dynamics in Assemblies of the Puerta del Sol Protest Camp (Madrid). 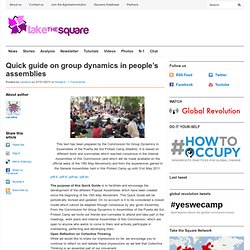 It is based on different texts and summaries which reached consensus in the internal Assemblies of this Commission (and which will be made available on the official webs of the 15th May Movement) and from the experiences gained in the General Assemblies held in this Protest Camp up until 31st May 2011. pdf-it, pdf-fr, pdf-es, pdf-en The purpose of this Quick Guide is to facilitate and encourage the development of the different Popular Assemblies which have been created since the beginning of the 15th May Movement.

This Quick Guide will be periodically revised and updated. On no account is it to be considered a closed model which cannot be adapted through consensus by any given Assembly. What is a People’s Assembly? LOGISTICS TEAM: Its purpose is to prepare and organise the Assembly area before it takes place in order to make it more efficient and functional. Nonviolent Communication.

InterOccupy. Distracting Influences. Are Americans a Broken People? Why We've Stopped Fighting Back Against the Forces of Oppression. December 11, 2009 | Like this article? 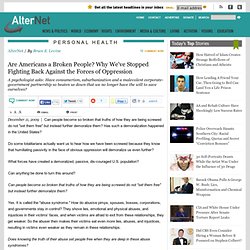 Join our email list: Stay up to date with the latest headlines via email. Can people become so broken that truths of how they are being screwed do not "set them free" but instead further demoralize them? Has such a demoralization happened in the United States? Why Are Americans So Easy to Manipulate? (Image: Head gears via Shutterstock)What a fascinating thing! Total control of a living organism! — psychologist B.F. Skinner The corporatization of society requires a population that accepts control by authorities, and so when psychologists and psychiatrists began providing techniques that could control people, the corporatocracy embraced mental health professionals.

In psychologist B.F. What's Stopping More of Us From Being Environmentalists and Feminists? Canadian researchers report people hold negative views of political and social activists, and their unwillingness to associate with such people dampens the likelihood of changing their behavior. Why don’t people behave in more environmentally friendly ways? New research presents one uncomfortable answer: They don’t want to be associated with environmentalists. That’s the conclusion of troubling new research from Canada, which similarly finds support for feminist goals is hampered by a dislike of feminists.

Participants held strongly negative stereotypes about such activists, and those feelings reduced their willingness “to adopt the behaviors that these activities promoted,” reports a research team led by University of Toronto psychologist Nadia Bashir. This surprisingly cruel caricaturing, the researchers conclude, plays “a key role in creating resistance to social change.” Another study, featuring 17 male and 45 female undergraduates, confirmed the pervasiveness of those stereotypes. The Three Reasons Why Americans AREN'T Rising Up in Open Revolt (Robert Reich) Engaging Apathetic and Disempowered Groups. Margaret J. Wheatley: Disturb Me, Please.

Eight hundred years ago, Catherine, a woman living in Sienna Italy who was later to become a saint, stated: "Speak the truth in a million voices. It is silence that kills. " Community Organizer scott crow Talks Shifting Culture Without Government — American Dreamers. I recently spoke to noted community organizer scott crow about how average people—people with dreams, vision, grit and motivation—can effect change in a very real and quantifiable way after the vote.

This isn't a playbook for smashing some McDonald's or Starbucks windows, but for taking the fight to communities. A tired cycle exists in American electoral culture. Every two years we vote for federal representatives and senators, and every four years we vote in the presidential election. Each election cycle builds to a critical mass of ideological recriminations, crescendoing on election day.

Sandra Steingraber on Taking Action. Bill Moyer- What Does it mean to be an Organizer. Funding Resources. Home. Mailing Lists in Politics: How to Reach Your Voters - NextMark. How To Occupy. Inter-Occupy Behavorial Issue Registry. Occupy theorists launch militant research handbook. A collaborative project seeks to redefine the place where activism and academia meet by promoting militant research in, about and with the movements.

Change.org - Start, Join, and Win Campaigns for Change. Petition Site - Start free petitions. In the Moment. Jason Adams Williams College. Good news from Germany: A 'global transformation of values has already begun'. Scientists find visions of a benevolent future society motivate reform. Activists, take note: People support reform if they believe the changes will enhance the future character of society, according to a study published online this month in the Personality and Social Psychology Bulletin.

Study on Social Movements and Policy Implementation; Andrews, K.T. A centralized location for your leftist literature: Archive. Don't Let Occupy Be Occupied: 6 Ways to Fight the Creep to Institutionalize. Photo Credit: David Shankbone January 25, 2012 | Like this article? Join our email list: Stay up to date with the latest headlines via email. It's worth a long night’s conversation over your beverage of choice to explore the history of how becoming institutionalized affected the course of the civil rights and women’s movements, among others. An open letter and warning from a former tea party movement adherent to the Occupy Wall Street movement. : occupywallstreet. Theory & Event - Claiming Division, Naming a Wrong.

Why Fast, Cheap, and Easy Design Is Killing Your Nonprofit’s Brand.