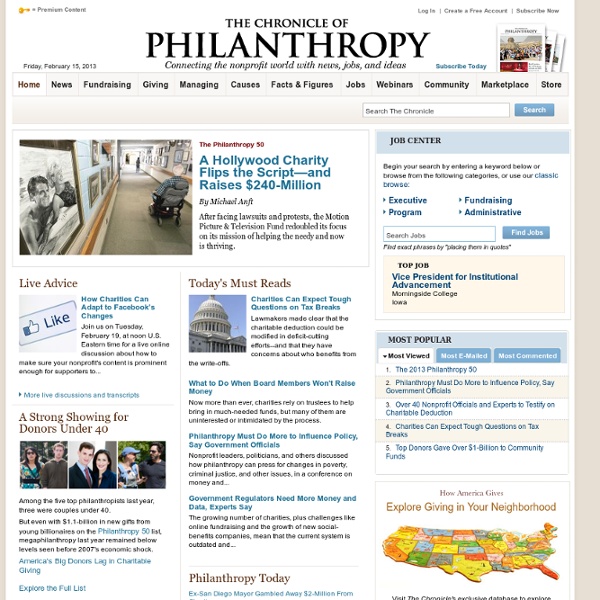 Don't Let Occupy Be Occupied: 6 Ways to Fight the Creep to Institutionalize Photo Credit: David Shankbone January 25, 2012 | Like this article? Join our email list: Stay up to date with the latest headlines via email. It's worth a long night’s conversation over your beverage of choice to explore the history of how becoming institutionalized affected the course of the civil rights and women’s movements, among others. Nonprofit World - Author Guidelines Nonprofit World : Author Guidelines Background: Nonprofit World welcomes unsolicited manuscripts but asks that you not submit your manuscript to any other publication until we have looked at it. We will let you know within a few weeks whether we will use it. Nonprofit World is aimed primarily at executives, board members, volunteers, and others who serve nonprofit organizations. Most articles are addressed to the executive director.

Dell Earns Top Green Company Title in Newsweek's 2010 Green Rankings Photo via Bigpresh via Flickr Creative Commons Newsweek released it's top picks for environmentally-focused companies in the US, naming what it sees as our 100 greenest. Ranked at the top is Dell -- and in fact IT companies were the clear leaders in the rankings with HP taking second and IBM third, which helps put the focus on technology and electronics, both as a benefit and problem. According to Newsweek, Dell earned its perfect 100% score through walking the talk: The Philanthropist Few Canadians think about public policy, though it touches our lives in innumerable ways every day. Taken together, the policy choices made by Canadian governments over time have created a range of societal features most of us simply take for granted. But, of course, our collective safety and security, well-being, and prosperity do not appear out of thin air. They are, in large measure, the intended outcomes of a vigorous public policy process.

Theory & Event - Semantic, Pragmatic, and Affective Enactment at OWS In lieu of an abstract, here is a brief excerpt of the content: The Occupy movement shows us how the semantic, pragmatic, and affective - meaning, action, and feeling - are intertwined in all collective practices. The intertwining of the semantic and the pragmatic - what we say and what we accomplish in that saying - has been a topic of interest in the humanities and the critical social sciences for almost 50 years, since its thematization by Austin and its codification in Speech Act Theory; widespread interest in affect has been more recent, but the interplay of its twin roots in Tompkins and Deleuze - producing a sort of evo-neuro-Spinozism - has been usefully explored in The Affect Theory Reader (Gregg and Seigworth, 2010). It's now time to bring speech act theory and affect theory together in understanding the role of political affect (Protevi 2009) in the Occupy movement. To do that, we'll need some housecleaning.

Employee volunteer program One of a series of excerpts from the 2014 State of Green Business report (download here). Engaging employees on environmental and social issues long has been a favorite topic of corporate sustainabili... And it’s this larger purpose which helps employees feel that their ... If you want to get your company’s top dogs more engaged around your corporate volunteer and giving program, here’s a checkl... During the sessions, Shannon will blog (maybe even Twitter ... approach corporate social responsibility from a holistic perspective, and allow the employee volunteer program to flow from that organica... Microsoft Australia yesterday (14 February) officially launched the company’s Employee Citizenship program targeting its 750 staff. The Greehey Family Foundation: William E. (Bill) Greehey Bill Greehey is Chairman of the Board of NuStar Energy L.P., and NuStar GP Holdings, LLC, both of which are based in San Antonio, Texas. NuStar Energy is a publicly traded master limited partnership that is one of the largest asphalt refiners and marketers in the U.S. and the third largest independent liquids terminal operator in the world. Valero GP Holdings, LLC was formed as the general partner for Valero L.P. in 2006, and both companies assumed the NuStar name in April 2007 as part of their separation from Valero Energy.

Quick guide on group dynamics in people’s assemblies This text has been prepared by the Commission for Group Dynamics in Assemblies of the Puerta del Sol Protest Camp (Madrid). It is based on different texts and summaries which reached consensus in the internal Assemblies of this Commission (and which will be made available on the official webs of the 15th May Movement) and from the experiences gained in the General Assemblies held in this Protest Camp up until 31st May 2011. pdf-it, pdf-fr, pdf-es, pdf-en Volunteer Power: Workshops Training Workshops on Volunteer Leadership We will develop a workshop for your organization from the following workshops. Pick and choose from the following topics the issues that address your concerns. Setting up in business as a sole trader Becoming a sole trader is the simplest way to get your new business off the ground. Once you have told HMRC of your intention to become self employed, you can start trading immediately, subject to any industry-specific licences you might need. As a sole trader, you will have complete control over your business and finances. You can adapt quickly to any changes in your business, without having to concern yourself with a great deal of bureaucracy.

New Rules for Radicals: 10 Ways To Spark Change in a Post-Occupy World February 1, 2012 | Like this article? Join our email list: Stay up to date with the latest headlines via email. Editor's note: AlterNet is excited to announce the launch of a full-fledged, future-oriented "Visions" section.