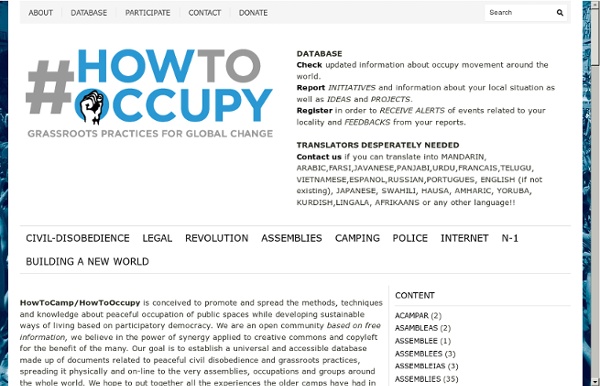 Occupy Infoshop Ideas and Action (WSA) With several months of preparation and one month of action, Occupy Wall Street has accomplished what years of conventional activism has failed to do–spark a populist political awakening against the ruling class. The 99ers have captured the imagination of regular Americans from every background and point of view, unified by a general disgust with the upper […] Reflections for the US Occupy Movement From Barcelona’s Neighborhood Assemblies by PETER GELDERLOOS CounterPunch October 14, 2011 Barcelona. Before the Spanish call-out for a global day of action on October 15, a few critical notes and words of encouragement from the Barcelona neighborhood assemblies… After the courageous revolts of the Arab Spring, the next phenomenon of popular resistance to capture […] Occupy4GeneralStrike (#HitEmWhereItHurts) by Mickey Z. October 15th 2011 in Phoenix Arizona was a pivotal day for the Occupy movement.

Occupy Food Adbusters Culturejammer Headquarters | Journal of the mental environment The Occupy.Network CACHE So what the fuck has occupy done so far? Occupy Wall Street | September 17th | #OCCUPYWALLSTREET The joyous freedom of possibility. Dissent can be personal, collective, creative — whatever you want it to be. Revolt can be physical or spectral, a blackspot on a corporate logo or a digital mindbomb posted online. Edit a billboard, speak to a friend. There are no limits, no minimum or maximum. The revolutionary spark is the same one that lit human existence. Print & Post If you only do one thing today and during the heady days of climate protest that follow, print out as many copies of this #WORLDREVOLUTION poster as you can and tape them up on bus stops, bank and shop windows, cash machines, government buildings, everywhere in your city where people will see them. Download September 11, 2014 What will you do on the September 17th anniversary of Occupy Wall Street? September 16, 2013 Revolution is a Rhizome September 19, 2012 Tactical Briefing #38. September 12, 2012 Where do we stand? July 23, 2012 Tactical Briefing #36 June 5, 2012 Occupy morphs into a new model! May 24, 2012 May 16, 2012

Occupytalk.org Call for a Global Spring in May 2012 Throughout this period of civil disobedience, from Tunisia, to Iceland and the latest uprisings in Greece and India (feel free to add other places), if anything has become clear it is that not only political systems have reached advanced levels of disintegration, so have their methods of representation, as well as their subordination to capitalist rule.In 2011 we took the streets, we regained our public spaces, got together, opened up dialogues and shared our dreams. We joined forces to make it clear that we are not commodities at the will of politicians and bankers who instate austerity policies and make our lives precarious. Instead, we declare, with our fellow Greeks “We owe nothing, we will not pay and will not sell ourselves!” However, what is far more important is that we also share a desire in re-appropriating our lives and the commons by means of direct participation, joint management, and ultimately the desire for a true democracy at the service of everyone.