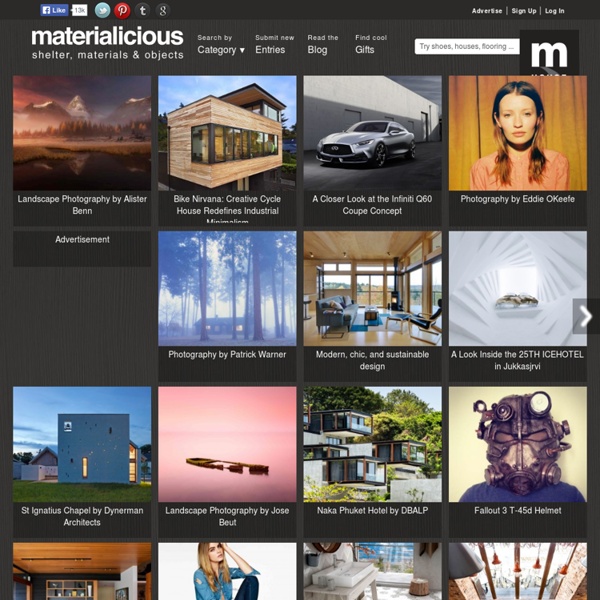 Talking to Jay Shafer About Making the Universal House Few names are as closely associated with small living as Jay Shafer, the man who practically invented what is now known as the tiny house. Tiny houses have become a minimalist design and lifestyle ideal. Their tiny size permits no extraneous stuff. They occupy a fraction of the spatial and carbon footprint of a normal home.

Ramus M1 Table/Desk by Design Studio Il Hoon Roh Ramus, latin for 'tree branch', combines the strengths of carbon fibre with the structural advantages that can be found in the branch of a tree. (Click the images below for full sized images) The Ramus M1 is a desk with a transparent glass top and a supporting structure underneath with tree-like limbs that support the top. Designer Il Hoon Roh claims the bifurcating structure maximises the table's structural capacity and strength. It's the latest development and creation in the designer's long-term study of efficient forms found in nature, a passion to design works with an architectural concept and "a natural method" that maximises a material's potential. The Ramus M1 is made of carbon fibre, the same material used in fighter jets, F1 cars and space shuttles.

STYLEPARK e15 LT07 SPAN Michael Raasch Laufen Kartell light Ludovica + Roberto Palomba Foscarini Aplomb wall lamp LucidiPevere Studio Plansheet "The Long Thin House" Click on the plan or elevation for a larger image. Features The Long Thin house was designed for a standard rectangular urban lot and has 2 bedrooms and 1080 square feet. All of the spaces have vaulted ceilings which contribute to their spaciousness. The plan is oriented to maximize natural light and take advantage of the depth of the lot, creating more usable outdoor yard space than in a traditional front and back yard design. Focus Hub Photography Courses Blog For his latest multimedia project, Natural Beauty, James Houston was inspired by nature, with the goal to raise awareness and funds for the environment and sustainable living. Created in partnership with MILK and environmental non-profit Global Green USA, Houston shot a series of striking portraits featuring some of the world’s leading celebrities and models including Adrian Grenier, Emma Watson, Christy Turlington, Karlie Kloss, Arizona Muse and Anja Rubik. These captivating photographs bring together two of Houston’s great passions – the human form and the natural world.

Tiny House Builders and Companies There is a growing number of tiny house builders to choose from and several ways to go about building your own. So which way is best? That’s the question you’ll have to answer for yourself. And there’s a lot to think about... I can help by showing you what I do know about each company and what they offer. Then it’s up to you to decide what options are best suited for your own needs.

Dow Jones Architects — Prospect House © David Grandorge . Published on March 27, 2013. Prospect House is located on Sion Hill, overlooking Bath. The house faces south and is built into a steeply sloping site with amazing views. It was built in the mid 1980s and conformed to the genre of houses built in Bath at that time: reconstituted Bath stone blockwork walls, a concrete tiled roof with big eaves overhangs, Proprietary softwood windows, and was trapped stylistically somewhere between volume house building and a nod to Frank Lloyd Wright. The house was organized around an upper entrance level, with a living room, dining room, kitchen and garage; four bedrooms and a bathroom were situated on the lower ground level below. Siruca Playing Cards by Fabrizio Schiavi Like “The glyphs of Siruca™ are designed as stencils with rounded terminals. The unusual position of the stroke interruptions helps in identifying each letter, number or pictogram.

Gallery - Superbox Shelter Documenting a personal quest for non-toxic housing. Superbox As the advocates of the brief High Tech design movement of the 1980s -and the Eameses 40 years before them- well demonstrated, there is much practical potential in the creative reuse of industrial products in the application of housing. This was a natural area of exploration for me because industrial structures have always tended to be made with far more robust materials than is typical of housing and, as a result, make extensive use of non-toxic steel, aluminum, and concrete. And contemporary industry tends to generate a very steady stream of cast-offs with potental for reuse given a little ingenuity. Creative Review - With the Tour de France starting in July, Yellow Jersey Press has reissued five classic cycling books with covers referencing some of the most famous colours in the sport... Our Ad of the Week is the Oreo Snack Hacks campaign, which sees the cookie brand invite three LA chefs to use the biscuits to make new, unexpected snacks – some that look pretty disgusting, others surprisingly tasty... Damien Florébert Cuypers has animated a series of shorts for furniture brand Herman Miller, in which 80-year-old Hilda Longinotti reflects on her 21-year tenure at design director George Nelson's New York studio. Design studio Kellenberger-White has created a hand painted font and identity system for arts festival Glasgow International. This week's round-up of new ads features some lovely print work, web work, ambient (is that phrase still used?) work, as well as some great films.

9 great ways to use a tiny house (other than as a home) Whether you call them tiny houses, micro-homes, or mini houses, ultra-small buildings are rapidly gaining popularity for those who want to downsize and minimalize their personal environmental footprint. It's refreshing to see so many people choosing a different path for their day-to-day living experience than the conventional oversized dwellings that make up the bulk of the houses on the market. Living in a tiny house can reap dividends beyond just being able to get to mortgage-free sooner and cutting utility bills down to size, as learning to live more simply and minimally can offer a sense of satisfaction and fulfillment that isn't easily found in any other living environment. But for those who think, "I could never live in a house that small," tiny houses also easily lend themselves to a range of other uses, none of which require living in them full-time. 1. 2.

Art Lorraine Loots is an artist based in Cape Town who wrapped a highly successful project called 365 Paintings for Ants at the end of 2013. as you can guess from the title, Lorraine painted a tiny painting every day for 365 days and, well, you have hopefully seen that scene which explains the name. she posted a painting every day on Tumblr and Instagram (where you can browse all 365 paintings in the archive). most of the time the subject stemmed from her own imagination, but as it gained momentum people booked dates that were special to them and commissioned paintings, like this portrait of Ron Swanson painted for a couple who got engaged after an episode of Parks and Recreation. be sure to read this wonderful interview by Lior Phillips to learn more about Lorraine and her work. you can follow the new project on her Instagram & Tumblr and you can also book a painting if you’d like to own one of these tiny delights.