Introduction . Freedom Summer . American Experience . WGBH. “I’m going down to MississippiI’m going down a Southern road And if you never see me again Remember that I had to go” In 1964, less than 7% of Mississippi’s African Americans were registered to vote, compared to between 50 and 70% in other southern states. 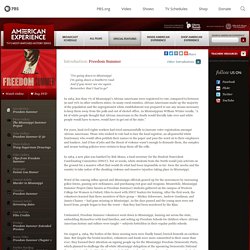 In many rural counties, African Americans made up the majority of the population and the segregationist white establishment was prepared to use any means necessary to keep them away from the polls and out of elected office. As Mississippian William Winter recalls, “A lot of white people thought that African Americans in the South would literally take over and white people would have to move, would have to get out of the state.” For years, local civil rights workers had tried unsuccessfully to increase voter registration amongst African Americans. In 1964, a new plan was hatched by Bob Moses, a local secretary for the Student Nonviolent Coordinating Committee (SNCC).

Ferguson shooting: Barack Obama calls for peace amid protests in wake of police shooting. Updated US president Barack Obama has called for peace on the streets of Ferguson, Missouri, after the fatal shooting of an unarmed black teenager by a police officer. 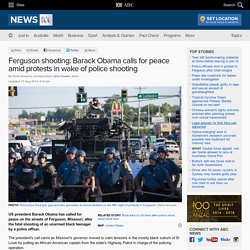 The president's call came as Missouri's governor moved to calm tensions in the mostly black suburb of St Louis by putting an African-American captain from the state's Highway Patrol in charge of the policing operation. Protesters have been engaged in nightly stand-offs with heavily armed police since 18-year-old Michael Brown was fatally shot on Saturday during what authorities said was a struggle over a gun in a police car. Some witnesses say he was outside the car with his hands up when he was killed.

Captain Ron Johnson, a highway patrolman who grew up in Ferguson, has been tasked with easing tensions. He said he would go to "ground zero"' - the area where Mr Brown was killed - on Thursday evening (local time) to speak to locals. "I've had enough of being pushed around because of the colour of my skin. ABC/Reuters. Ferguson shooting: State of emergency, curfew declared as tensions escalate again over fatal shooting of black teenager. Updated Missouri governor Jay Nixon has announced a state of emergency in Ferguson, Missouri, after a week of racially-charged protests following the fatal shooting of an unarmed black teenager by a white police officer. 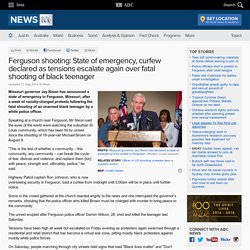 Speaking at a church near Ferguson, Mr Nixon said the eyes of the world were watching the suburban St Louis community, which has been hit by unrest since the shooting of 18-year-old Michael Brown on August 9. "This is the test of whether a community – this community, any community – can break the cycle of fear, distrust and violence, and replace them [sic] with peace, strength and, ultimately, justice," he said. Highway Patrol captain Ron Johnson, who is now overseeing security in Ferguson, said a curfew from midnight until 5:00am will be in place until further notice. The unrest erupted after Ferguson police officer Darren Wilson, 28, shot and killed the teenager last Saturday. 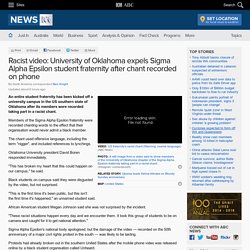 Members of the Sigma Alpha Epsilon fraternity were recorded chanting words to the effect that their organisation would never admit a black member. The chant used offensive language, including the term "nigger", and included references to lynchings. Oklahoma University president David Boren responded immediately. "This has broken my heart that this could happen on our campus," he said. Civil Rights Research Topics. Ruby Bridges visits with the President and her portrait. Civil Rights Movement in America. 9.2​Part I: Case Studies Principal focus: Students apply historical inquiry methods within a range of historical contexts to investigate key features, issues, individuals, groups, events, concepts and other forces in the eighteenth, nineteenth and twentieth centuries. 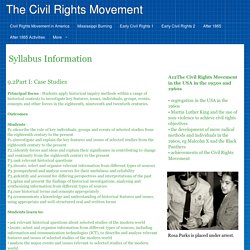