Veterans of the Civil Rights Movement. In 1963, the freedom-fires sparked by student activists in the sit-ins, Freedom Rides, and voter-registration campaigns merge into a run-away blaze igniting the entire South. 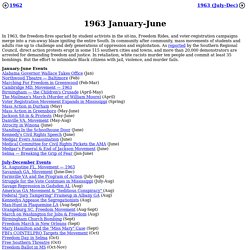 In community after community, mass movements of students and adults rise up to challenge and defy generations of oppression and exploitation. As reported by the Southern Regional Council, direct action protests erupt in some 115 southern cities and towns, and more than 20,000 demonstrators are arrested for demanding freedom and justice. In retaliation, white racists murder ten people and commit at least 35 bombings. But the effort to intimidate Black citizens with jail, violence, and murder fails. July-December EventsSt. Alabama Governor Wallace Takes Office (Jan) Newly-elected Alabama Governor George Wallace takes power on January 14, 1963. 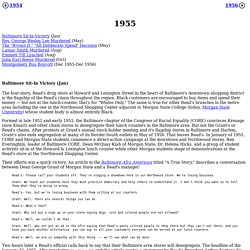 Black customers are encouraged to buy items and spend their money — but not at the lunch-counter, that's for "Whites Only. " The same is true for other Read's branches in the metro area including the one in the Northwood Shopping Center adjacent to Morgan State College (today, Morgan State University) whose student body is almost entirely Black. Their efforts win a quick victory. Read's: Please call your students off. Two hours later a Read's official calls back to say that their Baltimore area stores will desegregate. NAACP Leader Rev. Morgan State exhibit celebrates university's role in the civil rights movement - tribunedigital-baltimoresun. Clarence Logan, a member of Morgan State University's… (Barbara Haddock Taylor…) November 10, 2011|By Childs Walker, The Baltimore Sun Julia Davidson-Randall knew she was likely to be arrested. 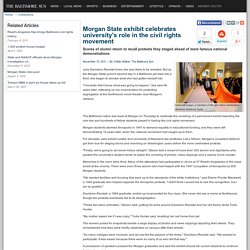 But as the Morgan State junior's second day in a Baltimore jail bled into a third, she began to wonder what she had gotten herself into. "I honestly didn't know what was going to happen," she said 48 years later, reflecting on her incarceration for protesting segregation at the Northwood movie theater near Morgan's campus. The Baltimore native was back at Morgan on Thursday to celebrate the unveiling of a permanent exhibit depicting the role she and hundreds of fellow students played in fueling the civil rights movement. Morgan students stormed Annapolis in 1947 to demand equality in educational funding, and they were still demonstrating 16 years later, when the national movement had caught up to them. Greensboro Sit-Ins: Launch of a Civil Rights Movement : Article. Sit-in hero leaves a 41-year legacy of public service By JIM SCHLOSSER, Staff Writer Tuesday, Feb. 6, 2001 GREENSBORO -- Many know him only as Joe McNeil, national civil rights hero who with three other students changed history in 1960 by taking seats at a whites-only lunch counter in Greensboro and refusing to leave. 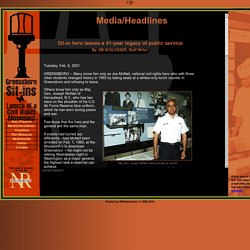 Maj. Gen. Joseph McNeil stands beside an exhibit about the Greensboro sit-ins at the Memphis Civil Rights Museum in Tennessee. Others know him only as Maj. Few know that the hero and the general are the same man. If events had turned out differently - had McNeil been arrested on Feb. 1, 1960, at the Woolworth's in downtown Greensboro -- he might not be retiring Wednesday night in Washington as a major general, the highest rank a reservist can achieve. His retirement ceremony, which will include a dinner at the Washington Hilton, comes 41 years and a week after the sit-ins. McNeil and the three other A&T freshmen -- Franklin McCain, David Richmond and Ezell Blair Jr. 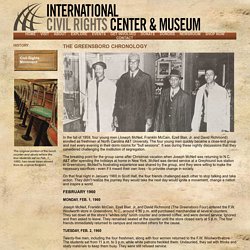 The four young men quickly became a close-knit group and met every evening in their dorm rooms for "bull sessions". It was during these nightly discussions that they considered challenging the institution of segregation. The breaking point for the group came after Christmas vacation when Joseph McNeil was returning to N.C. A&T after spending the holidays at home in New York.

McNeil was denied service at a Greyhound bus station in Greensboro. On that final night in January 1960 in Scott Hall, the four friends challenged each other to stop talking and take action. Joseph McNeil, Franklin McCain, Ezell Blair, Jr. and David Richmond (The Greensboro Four) entered the F.W. Twenty-five men, including the four freshmen, along with four women returned to the F.W.