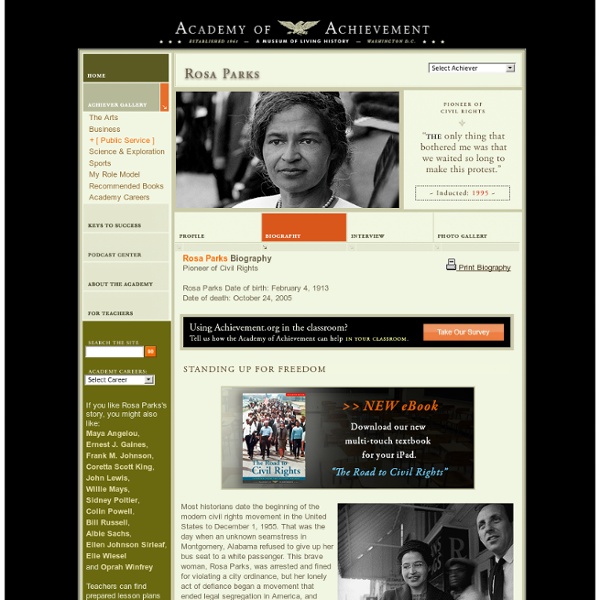 Martin Luther King - Biography Martin Luther King, Jr., (January 15, 1929-April 4, 1968) was born Michael Luther King, Jr., but later had his name changed to Martin. His grandfather began the family's long tenure as pastors of the Ebenezer Baptist Church in Atlanta, serving from 1914 to 1931; his father has served from then until the present, and from 1960 until his death Martin Luther acted as co-pastor. Martin Luther attended segregated public schools in Georgia, graduating from high school at the age of fifteen; he received the B. A. degree in 1948 from Morehouse College, a distinguished Negro institution of Atlanta from which both his father and grandfather had graduated. After three years of theological study at Crozer Theological Seminary in Pennsylvania where he was elected president of a predominantly white senior class, he was awarded the B.D. in 1951. In 1954, Martin Luther King became pastor of the Dexter Avenue Baptist Church in Montgomery, Alabama. Selected Bibliography "Martin Luther King, Jr

Search Your Queue Settings Log Out Snag Selects super tag loudQUIETloud: A Film About the Pixies Hitman Hart: Wrestling with Shadows All Me: The Life and Times of Winfred Rembert A Fighting Chance Miss Firecracker Ballou Moscow Cat Theater Charade Happy Together Biggie and Tupac Loading… Black Civil Rights….America in the 1950′s | Peacemakervoices's Blog The Black Civil Rights Movement (CRM) campaigned to end Racism and Inequality for black people between 1955 and 1968. Before the CRM many towns and cities in America were segregated- black people could not use the same building entrance as a white person, eat in the same cafe, sit in the same taxi or use the same drinking fountain. Not only that, the police, judges and juries were all white and the laws supported these inequalities. The CRM challenged not only the laws but people’s attitudes- attitudes that saw black people being treated as inferior citizens because of the colour of their skin. Supported by the then President, John F Kennedy, the movement grew and laws began to change. Ryan (16) Peer Educator: This week we focused on the Black Civil Rights Movement. Siofra (20) Manchester University Student: Thoroughly enjoyed the session. Like this: Like Loading...

Let’s talk about racism. A link popped up in my twitter feed today to a fairly in depth article by Tim Wise exploring the often overlooked ways racism can manifest in progressive and liberal movements. It struck me that this could speak directly to skeptical groups as well. If we are indeed concerned with fostering a diverse community, which will enable us to reach a broader base, these are important points to consider as we strategize and plan our outreach. Below are several excerpts I found to be particularly salient to what we’re about here at Skepchick. I would, however, encourage our audience to take the time to read the article in full. On the issue of movement demographics: Race as it relates to feminism: Perhaps the classic example of how liberal-left activists can manifest white privilege is that of the white-dominated womenâ€™s movement. On what we can do differently: I’m putting this out to our readers as a call for further discussion on the topic of race and skepticism.

s Resources for Black History AwesomeStories is a one stop shop of primary source materials. It is a gathering place of sources located at national archives, libraries, universities, museums, historical societies and government-created websites. The site includes documents, videos, audio clips and narrations. Topics range from the Women's Movement to Emperor Penguins to Abraham Lincoln to the Easter Story (through medieval/renaissance art) and much more. Search by biography, disaster, trials, flicks, history, philosophy, sports, or the arts. You can also search by lesson plans, narrations, slide shows, videos, images, audio clips, documentaries, and more! In the Classroom Use this rich site to support your social studies, history, science, language arts classroom and many others!

A Century of Racial Segregation 1849–1950 - Brown v. Board at Fifty: "With an Even Hand" | Exhibitions An elementary school in Hurlock, Maryland, ca. 1935. Gelatin silver print. Visual Material from the NAACP Records, Prints and Photographs Division, Library of Congress (20A). Courtesy of the NAACP. [Digital ID# cph 3c26579] After the abolition of slavery in the United States, three Constitutional amendments were passed to grant newly freed African Americans legal status: the Thirteenth Amendment abolished slavery, the Fourteenth provided citizenship, and the Fifteenth guaranteed the right to vote. Beginning in 1909, a small group of activists organized and founded the National Association for the Advancement of Colored People (NAACP). Discover! Imprisoned for Teaching Free Blacks The prohibition of education for African Americans had deep roots in American history. Margaret Crittenden Douglass. Upholding School Segregation: The Roberts Case Five-year-old Sara Roberts was forced to walk past several white schools to reach the “colored” primary school. Charles Sumner. Plessy v. Phillip B.

images-2 Today In Black History / This Day In Black History / Black History Facts Calendar The KKK and racial problems The Ku Klux Klan was basically based in the south of America. Here they targeted those set free after the American Civil War - the African Americans. The KKK had never considered the former slaves as being free and terrorised Africa American families based in the South. America experienced great economic prosperity during the 1920's but not much of it filtered to the South. Racism mixed with anger at their economic plight formed a potent cocktail. Many different groups had emigrated to America over the years. A meeting of the KKK in 1922 The leader of the KKK in the 1920’s was a dentist called Hiram Wesley Evans whose name in the KKK was Imperial Wizard. The Black Americans tried to fight back using non-violent methods.

Rosa Park, what a good example of a revolutionary African American person! She refused to let her place to a white person in the city bus after her multiple arrestations. She's a leader in her society and people followed her. In the aboriginal culture, marches were organized to support their rights. by gagnonseguinzilio Oct 31