Training For Change. Refuge: Caring for Survivors of Torture. 10 Points On The Science Of Spreading The Word. This piece is from a new PopTech Edition about harnessing social contagion for social good. 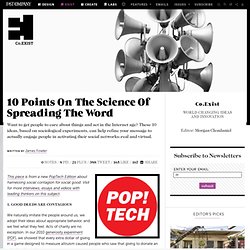 Visit for more interviews, essays and videos with leading thinkers on this subject. 1. Good deeds are contagious We naturally imitate the people around us, we adopt their ideas about appropriate behavior, and we feel what they feel. Acts of charity are no exception. 2. That same experiment showed that contagious generosity spreads up to three steps through the network (from person to person to person to person), and when we added up all the extra donations that resulted at every step, we found that an extra dollar in giving yielded three extra dollars by everyone else in the network. 3. People are bombarded by information and appeals every day, especially in our newly mobile and tech-centered society, so the effect of any one appeal to do a good deed may get lost.

Marshall Ganz: Why Stories Matter. Marshall Ganz is a lecturer at Harvard’s Kennedy School of Government. 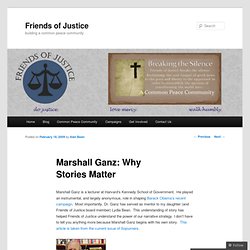 He played an instrumental, and largely anonymous, role in shaping Barack Obama’s recent campaign. Most importantly, Dr. Ganz has served as mentor to my daughter (and Friends of Justice board member) Lydia Bean. This understanding of story has helped Friends of Justice understand the power of our narrative strategy. I don’t have to tell you anything more because Marshall Ganz begins with his own story. By Marshall Ganz I grew up in Bakersfield, California, where my father was a rabbi and my mother was a teacher. I got my real education, however, when I left Harvard to work in the civil rights movement in Mississippi. I also was raised on years of Passover Seders. I went to Mississippi because it was a movement of young people, and there’s something very particular about young people, not just that they have time.

How do organizers master urgency to break through inertia? Www.wholecommunities.org/pdf/Public Story Worksheet07Ganz.pdf. Smartmeme.drupalgardens.com/sites/smartmeme.drupalgardens.com/files/smartMeme.Call2Innovation.pdf. Freedom Informant Network. Lifting the Veil. The Turning Point - Full Film. The Movie - An unconventional documentary that lifts the veil on what's REALLY going on in our world by following the money upstream.

THRIVE is an unconventional documentary that lifts the veil on what's REALLY going on in our world by following the money upstream -- uncovering the global consolidation of power in nearly every aspect of our lives. Weaving together breakthroughs in science, consciousness and activism, THRIVE offers real solutions, empowering us with unprecedented and bold strategies for reclaiming our lives and our future.

“This is a wonderful movie! We want to be FREE! (short documentary) Corporate Millions, Deceptive Ads Only Narrowly Shut Down Prop 37. November 7th, 2012 Statement from Food & Water Watch Pacific Region Director Kristin Lynch SAN FRANCISCO—“In the face of unrelenting deceptive advertising funded by giant chemical and processed food corporations to the tune of nearly $50 million, California’s Proposition 37 calling for a simple label on genetically engineered food narrowly lost with 47 percent of the vote. 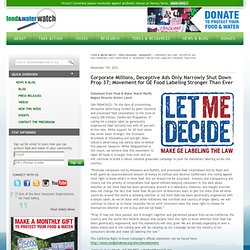 While support for GE food labels has never been stronger, the incessant drumbeat of misleading and outright false industry advertising was barely able to defeat this popular measure. While disappointed in the result, we believe that this movement to label GE foods is stronger than ever and we will continue to build a robust national grassroots campaign to push for mandatory labeling across the country. The California Right to Know Campaign’s official statement can be found here: Real Food Challenge.

Related:  Masonería   -  Anti SCAM   -  English Videos   -  The Movie - An unconventional documentary that lifts the veil on what's REALLY going on in our world by following the money upstream   -  Education   -  Enterprise