THE GAP by Ira Glass 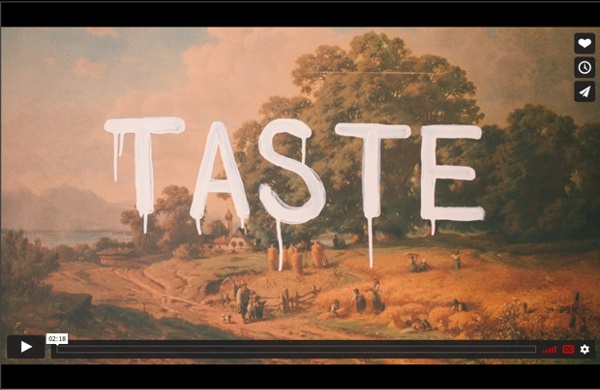 The $200 Los Angeles Bike Ride Music Video This is a Guest Post by Nick Roberts of “And the Giraffe” A short introduction about myself: My name is Nick Roberts and I play in a band called “And the Giraffe” based out of Nashville, TN. A few months ago, after putting out our second album, we decided to shoot a music video to support the single from the record. A friend of mine, Harrison Sanborn, lives and works out of Los Angeles and has been our go-to director/cinematographer for our music videos in the past, so there wasn’t any question that we were going to work with him for this project as well. Given that we’re an independent band, our budgets for just about all creative projects may as well look like we found loose change in our couch. We had about $200-$250 to spend on making a music video when we went out to visit Harrison in LA for a week, and we definitely put it to good use.

14 Brilliant Films You Can Watch in the Time It Takes to Eat Lunch You might have noticed that movies are getting longer these days. A typical Hollywood blockbuster now runs well over two hours, and who has time for all that? On the other hand, a well-made short film offers all of the same pleasures — story, spectacle, heart — and requires less of a time commitment. Plus, unlike with a Hollywood film, there is no formula for what a short film should be, meaning shorts are often richer in both creativity and originality. In honor of short films, and more enriching lunch breaks, we've compiled some of the best under 15-minute movies. Opinion: Indie Game Design Do-s and Don't-s: A Manifesto [Veteran indie game creator Edmund McMillen, known for his work on 2005 IGF Grand Prize winner Gish, Time Fcuk, and Super Meat Boy for WiiWare, shares his opinions and manifesto on making indie games, with 24 clear do-s and don't-s to make your art thrive.] One of the most common questions I'm asked in interviews is, "Do you have any advice for independent game developers who are new to the scene, or tips for developers in general?" Well, I actually answered it this time: I came up with this list of indie do-s and don't-s. Now, I'm going to make clear that I'm not perfect and I'm sure as the years go by this list will change.

The Painful Truth About Filmmaking No One Tells You When You're Just Starting Out YouTuber and independent filmmaker Darious Britt is back, this time with some hard truths about independent filmmaking that are sure to be painful to hear for anybody just starting with making their own films. Despite the bleak outlook, this video is one of the most inspiring things you'll see this week. Take a look. The painful truth is this: filmmaking -- particularly the independent variety -- is an uphill battle, and that's putting it mildly. For most of us, every step along the way will be fraught with unforeseen obstacles, most of which we won't have the proper time, money, or physical resources to solve. Writer/Director TJ Misny Opts to Release His Short Film Trilogy 'Intimate Semaphores' Through NoBudge After a year on the festival circuit with his feature length short film compilation Intimate Semaphores, director TJ Misny turns to the burgeoning NoBudge community for its online berth. A recent partnership with Indiewire (in which Indiewire will spotlight one NoBudge release each month) solidifies NoBudge as a viable streaming destination and place to get under-heralded work seen. All three Intimate Semaphores shorts are available to watch free online as of today and are described by NoBudge founder Kentucker Audley as "A collection of three short stories, each a surreal and darkly comic exploration of creative expression and how our artistic impulses have the power to unite us or alienate us." We caught up with director TJ Misny to discuss his reasoning behind the release and his evolution as a filmmaker as he hunts for financing on his first (bonafide) feature film. Watch all three films at NoBudge (or embedded throughout this post).

Two Insane Days on Tour With Tyler, the Creator Sorry, you can't come in here," Tyler, the Creator's bodyguard, Vill, says. "There's a no pants policy on the bus." Vill is a huge guy from a small island off the coast of Samoa. I tell him that I'm not taking off my pants, but he assures me that I won't be alone. Comments Arguably the most articulate human being the world has seen. He shares a very important message, while doing so in a way that provokes both our inner thought processes and a hidden love for poetry. Good man! Great message! Sri Pavan Sunnam

Adam Newport-Berra's 'Greenwood' Will Make Your Eyes & Ears Happy In the hustle and bustle of today's film world, it's rare to find a piece that so rigorously carves out space for quiet contemplation. This beautiful short Greenwood is a 20-minute favor to yourself. Filmmaker Adam Newport-Berra, (DP of Creative Control, First Winter) follows two men into the forest of upstate New York as we watch a slow, patient process unfold before our eyes. Watch: Tarantino-esque 'Moto Borgotaro' Breaks the Biographical Short Doc Mold It turns out that not all biographical short docs these days are exactly alike. A few weeks back, we shared a hilarious parody of a documentary style that has become all too common in today's internet culture. The style consists of plentiful voiceover, often soft and contemplative, slow motion shots of a subject as they take on mundane tasks, copious amounts of silhouetting, backlighting, and shallow depth of field, all of which is topped off with an emotive, atmospheric soundtrack. Of course, these filmmaking techniques are fine in and of themselves, as they can all be effective. However, when they're all used together, and when seemingly everybody is doing it to some extent, our content all starts to look and sound the same.