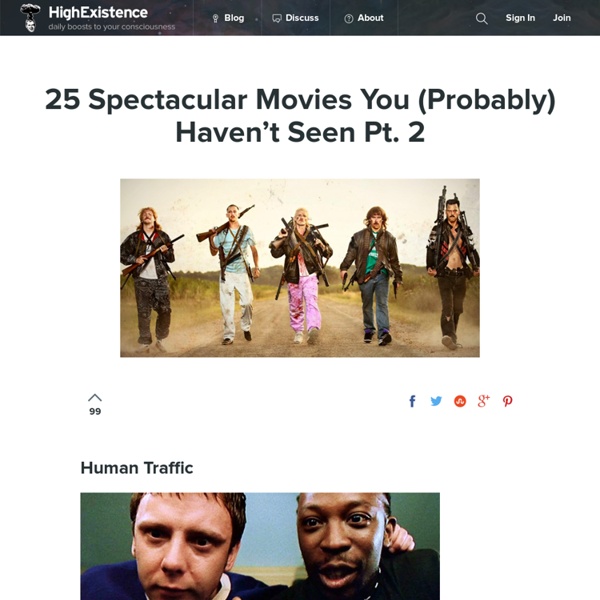 Human Traffic Very unique comedy about the drug/club culture in the UK. Five friends ponder society, drug use and their own lives as they go about their usual weekend of snorting, smoking, popping, dancing and sex. The Matador Pierce Brosnan plays an assassin going through a mid-life crisis as he approached retirement. He’s like 007 on a spree of existential questioning. The Good, The Bad, And the Weird Two comical outlaws and a bounty hunter fight for a treasure map in 1940s Manchuria while being pursued by the Japanese army and Chinese bandits. Tucker and Dale vs. A group of college students go camping for the weekend and, through a series of unlucky events, begin thinking that the harmless Tucker & Dale (pictured above) are trying to kill them. New Kids Turbo An absolutely nutty movie from the Netherlands. Kiss, Kiss, Bang, Bang KKBB is a murder-comedy (?) Big Trouble Big Trouble is one of those movies where all of these different people end up intertwined at the end of the movie. Dr.

Donnie Darko A new theory to help the viewer unravel the cult classic. Erik A. Coburn Top Ten Films 1930-2009 - StumbleUpon 2019 1. LEAVING NEVERLAND (Dan Reed) 2. APOLLO 11 (Todd Douglas Miller) 3. THE BEACH BUM (Harmony Korine) 4. The Fifty Greatest Cult Movies of All Time - Page 5 41. Stop Making Sense (1984) People had been filming rock concerts and calling the resulting footage "movies" for decades before Jonathan Demme took command of the director's chair. But working with his stars, Talking Heads, Demme made a concert movie with no out-of-focus shots, catch-as-catch-can camerawork, or even the intruding interviews that characterized even Martin Scorsese's The Last Waltz.

The 50 Scariest Movies of All Time The 50 Scariest Movies of All Time What is it about a perfectly done horror movie? You can't say there's a single way to do it: some use the time time-tested hot-chick-in-distress formula, some hinge on graphic displays of gore and disembowelment that make you recoil (even though keep watching, you sick bastard), and some simply shake you to your core...and in some cases drive you to therapy. But however a good scare flick works, it works, and in the process creates what are arguably your most vivid movie traumas memories. Ghosts, possessed kids, mutant killers, zombies—everyone has their own fear button, and everyone can have theirs pressed. Everyone. Most Controversial Films of All Time The Moon is Blue (1953) D. Otto Preminger Well-bred people in the 1950s didn't use words like "virgin," "seduce" and "mistress" in public, but this mild sex farce did and became a cause celebre. This daring sex farce and romantic comedy was the first major studio-produced film from Hollywood that was released without an approved code seal from the Production Code Administration (PCA).

100 Best Comedy Movies - Film Here's the 100 best comedy movies as chosen by more than 200 people whose job it is to make you laugh. We spoke to dozens of comedy writers, comedy directors, comic actors and stand-up comedians – including Dan Aykroyd, Richard Curtis, Edgar Wright, Kim Noble, Stephen Merchant, Jo Brand and many, many more – and asked them to share with us their favourite comedy films of all time. Can you guess which film emerged as the number one choice? UPDATE: Tell us the comedy movie you think should have made the list and we'll print the best ten in a future issue of Time Out magazine. Make your suggestions on our messageboards. Top 10 Quirky Films & Top 10 Films - Film Lists, Reviews, News & Opinion The quirky movie. They’re “strange, not normal but cool” says Blandine Etienne as she takes a look at her favourite films from a genre Tim Burton and Wes Anderson know plenty about. Other Top 10s on Top10Films.co.uk that you might like: Top 10 Cult Films | Top 10 Films Set Over One Night | Top 10 Suburbia In Peril Films My favorite definition of quirky is “strange, not normal but cool.” That is exactly why I like quirky movies.

666 DIY Horror Filmmaking Tutorials It’s that time of year again, so we thought it was time to update last years killer feature “Horror Filmmaking: From Script to Scream.” That’s right a sequel! This time we are narrowing the focus a bit and concentrating on the DIY (Do It Yourself) elements. Hopefully this will help you slash the budget without murdering your production values. 8 Iconic Movie Rules To Live By Few scenes in movies are as satisfying as a character confronting a rule. Whether they’re recalling what not to do (woo, callback!), facing the consequences of breaking the rule (woo, other callback!) or learning something deeper by embracing it (not really a callback, but still cool!) www.empireonline.com - StumbleUpon From Brazil to Japan to France and Senegal, from Neo-Realism to Dogme to J-horror, we've compiled a list of the very best films not in the English language (note: features, not documentaries). So rustle up some sushi, strike up a gauloise and make sure you've locked your bicycle as we count down the top 100 world cinema movies... 100. Night Watch Year: 2004Country: RussiaDirector: Timur Bekmambetov It's Buffy meets The Matrix meets Blade!

- StumbleUpon Midnight in Paris Woody Allen’s latest places starving writer Owen Wilson in Paris with his fiancée, Rachel McAdams. Searching for inspiration for his incomplete novel, Owen begins taking strolls around the city at night where he discovers an unexpected group of people. I wish I could be more specific, but it would ruin the surprise. Martin Scorsese's Film School: The 85 Films You Need To See To Know Anything About Film Interviewing Martin Scorsese is like taking a master class in film. Fast Company’s four-hour interview with the director for the December-January cover story was ostensibly about his career, and how he had been able to stay so creative through years of battling studios. But the Hugo director punctuated everything he said with references to movies: 85 of them, in fact, all listed below. Some of the movies he discussed (note: the descriptions for these are below in quotes, denoting his own words). Others he just mentioned (noted below with short plot descriptions and no quotes).

The 15 Best Miramax Films Today, the indie world and the film world at large lost a giant in the field, watching Disney close the doors and turn the lights off on Miramax. As sad a day like today is, and as uncertain as the future is, we can still hold on to the memories. Most of them are now on Blu-ray. Or at least Laser Disc (because we all own one). Top 10 Banned Movies Movies and TV [WARNING: some of the video clips in this list contain extremely violent or disturbing scenes.] For nearly the entire history of film production, certain films have been banned by film censorship or review organizations for political or moral reasons.