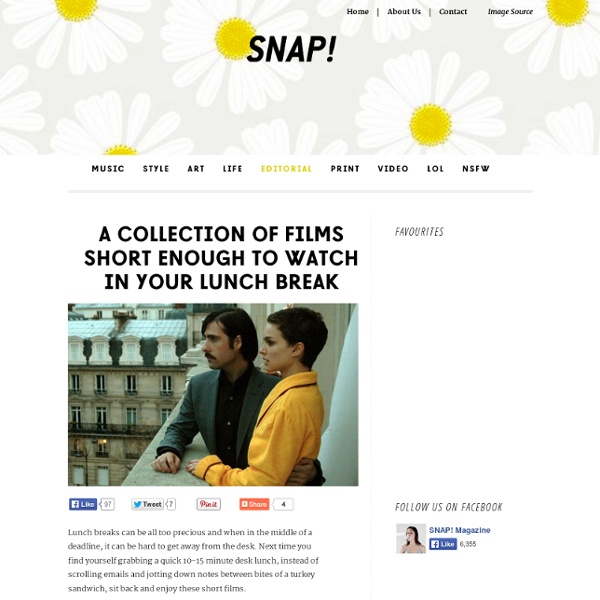 Lunch breaks can be all too precious and when in the middle of a deadline, it can be hard to get away from the desk. Next time you find yourself grabbing a quick 10-15 minute desk lunch, instead of scrolling emails and jotting down notes between bites of a turkey sandwich, sit back and enjoy these short films. These guys did an awesome job of collecting a series of films which are perfect for those rushed lunches. Take a deep breath, settle your napkin, relax and actually enjoy your meal. Bon appétit! 1. ’7:35 in the Morning’ Have you ever watched a musical and considered how absurd the characters must be for breaking into song every few minutes? 2. Beatlemaniacs, take note: In 1969, a 14-year-old boy snuck into John Lennon’s hotel room and recorded a 5-minute conversation with the Beatle. 3. In 1967, a young Martin Scorsese was at NYU film school, where he made this dark and compelling short. 4. 5. For police officers, every traffic stop has the potential to turn deadly. 6. 7. 8. 9. 10.

30 Movies That Define Cool Nothing says cool like a good guy movie. Especially ones with car chases, egg-eating contests, underground brawls, hit men, and foxy leading ladies. We’ve compiled a list of 30 cool movies that should be on every guy’s must-see list this summer. The Professional (Leon) Animated Short Movies » Life-Changing Arts Movie shorts, or short animations are a unique form of art, which can inspire and enlighten just like any other art form. Sometimes even more so. Here is a selection of inspiring, or for some reason animated short movies, here shown in their original full length. Thanks to all the visitors who have contributed with their detailed suggestions! That is why there are now two pages of great animated shorts! If you think there is a short animated movie that should be added, let us know which, and why.

Amazing Underrated Obscure Bizarre Films PART 11 list I really dig this IMDB plot summary, it paints a mysterious picture to get you interested while not giving away anything crucial, it's like a good trailer: A psychiatrist, Richard Burton, investigates the savage blinding of six horses with a metal spike in a stable in Hampshire, England. The atrocity was committed by an unassuming seventeen-year-old stable boy named Alan Strang, the only son of an opinionated but inwardly-timid father and a genteel, religious mother. As Dysart exposes the truths behind the boy's demons, he finds himself face-to-face with his own.

These 16 Hacks Make Cleaning Your House Less Of A Chore. It would be nice if we could all have a spoon full of Mary Poppins' sugar to make cleaning a snap. In the real world, though, it's always just the worst when you realize things have gotten a tad too untidy. Unless you're one of the strange and rare folks who seem to actually enjoy scrubbing and polishing, it's a struggle just to talk yourself into starting the awful tasks. But when the alternative is living in your own filth, you know it's time to hang your head and get to work.

20 PHOTOS THAT'LL CHANGE THE WAY YOU LOOK AT MOVIES Take a look at the below given 20 pictures that will change the way you look at the movies. we are fascinating about 3d, visual effects movies. Don’t know how effects comes from. So lets make it easy just check below out and makeup your mind. source 10 VIDEOS The GOVERNMENT DOESN'T WANT YOU TO SEE [VIDEO] - Secrets of the FedSecrets of the Fed In the current age of technology, while the internet is still free, information is accessible like no other time in history. The ability to keep information from the public is not as easy as it once was. Here are 10 videos the government does not want you to see! Halliburton subsidiary Dyncorp, a private military contractor based out of the United States, continued to receive government contracts even after it was learned that they had been directly involved in human-trafficking sex slavery rings.

Honda Giorno 50 Review Imagine a baby scooter born in the regimented, structured world of Japan, then whisked away to live in Italy raised by an old couple, say, Mario and Gabriella. He is named Giorno and he lives with this Italian couple in a small villa. This youngster is raised on pizzas and pasta, he goes to a small, country school just outside of Rome, he looks Italian, he speaks Italian, but he is Japanese. I can’t think of any other way the Giorno could have come into being.

The 50 Greatest Movie Monologues When I started compiling a list of my favorite monologues in movies, the list continued to expand and expand and expand to the point where it got a little ridiculous. So the first thing I tried to cut out was any monologues that were parts of voice-over work. That removed a lot of entries, but I still found myself with around 70 movies. The bottom line is if I were to do this list all over again there may be ten or so movies that are interchanged with the ones I selected here.

25 Spectacular Movies You (Probably) Haven't Seen Midnight in Paris Woody Allen’s latest places starving writer Owen Wilson in Paris with his fiancée, Rachel McAdams. Searching for inspiration for his incomplete novel, Owen begins taking strolls around the city at night where he discovers an unexpected group of people. 17 Movies You Should Make Time For – November 17, 2013Posted in: Lists, TV and Movies, Vertical 17 Movies You Should Actually Make Time For 1Share 223Share Related posts: Nash Grier, King Bach and Princess Lauren get love from fans and brands Nash Grier, King Bach, Princess Lauren, others latch on to brands, TV, music By Garett SloaneSeptember 14, 2014, 7:31 PM EDT These Web Stars Are Beyond 'Vine Famous' The social app Vine has created a whole universe of video stars whose antics have attracted millions of followers and made them "Vine famous." But social seems to be only the beginning. Take Nash Grier, with 9.3 million followers, who is spinning his Web notoriety into endorsements for brands like Virgin Mobile and even a film career. King Bach (aka Andrew Bachelor), with 8.2 million followers, is getting into the TV business and working with brands like Samsung.

Sound Effects - The Wilhelm Scream Hollywood Lost and Found The WILHELM Scream One sound effect that has found a following with many sound editors and observant movie fans is a distinctive scream named Wilhelm. In 1951, the Warner Bros. film "Distant Drums" directed by Raoul Walsh starred Gary Cooper as Captain Quincy Wyatt, who leads a group of soldiers to stop some Seminole Indians from threatening settlers in early 19th Century Florida.