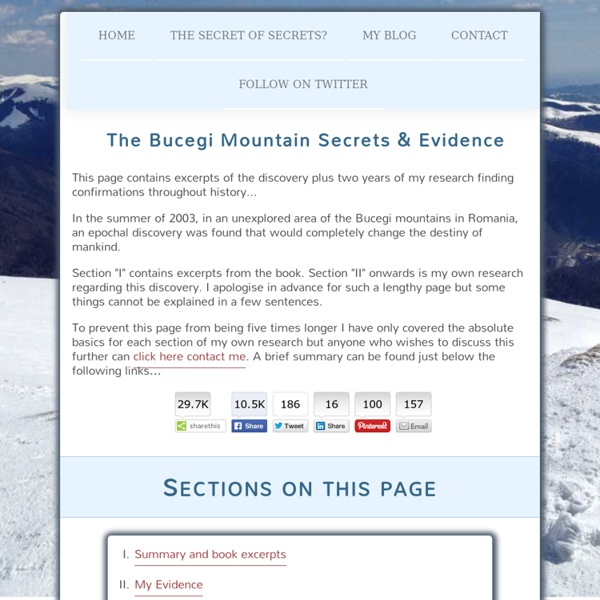 This page contains excerpts of the discovery plus two years of my research finding confirmations throughout history... In the summer of 2003, in an unexplored area of the Bucegi mountains in Romania, an epochal discovery was found that would completely change the destiny of mankind. Section "I" contains excerpts from the book. Section "II" onwards is my own research regarding this discovery. I apologise in advance for such a lengthy page but some things cannot be explained in a few sentences. To prevent this page from being five times longer I have only covered the absolute basics for each section of my own research but anyone who wishes to discuss this further can click here contact me. Sections on this page I. There are 4 primary tunnels and further sub tunnels that lead to deep underground places which you would have heard of. What happened in Romania Ground-penetrating radar The satellite scan of the mountain revealed two major energetic blocks. A similar structure in Iraq “Exactly!” 1.

Enormous megaliths discovered in Siberia Click here to view the original image of 610x400px. By April HollowayHave enormous megaliths been discovered in Southern Siberia, or are they a rare product of nature?A series of incredible photographs have been released by Dr Valery Uvarov, Head of the Department of Palaeoscience, Palaeotechnology, and UFO Research of the National Security Academy of Russia, following an expedition to the mountains of Gornaya Shoria in Southern Siberia. Some of the stones display clear edges and angles. Swedish divers unearth a 'Stone Age Atlantis': 11,000-year-old ancient settlement discovered under the Baltic Sea Divers found a harpoon, tools, horns and the bones of ancient cattle The bones belonged to the animal auroch last seen in the early 1600sArchaeologists believe these relics date back to the Stone AgeIt is said to be the oldest settlement in the area - dubbed Sweden’s 'Atlantis' By Victoria Woollaston Published: 16:06 GMT, 27 January 2014 | Updated: 17:16 GMT, 27 January 2014 Divers in Sweden have discovered a rare collection of Stone Age artefacts buried deep beneath the Baltic Sea. Archaeologists believe the relics were left by Swedish nomads 11,000 years ago and the discovery may be evidence of one of the oldest settlements ever found in the Nordic region. Some of the relics are so well preserved, reports have dubbed the find 'Sweden’s Atlantis' and suggested the settlement may have been swallowed whole by the sea in the same way as the mythical island in the Atlantic Ocean. Divers in Sweden have discovered a rare collection of Stone Age artefacts buried beneath the Baltic Sea, pictured.

Have enormous megaliths been discovered in Southern Siberia, or are they a rare product of nature? A series of incredible photographs have been released by Dr Valery Uvarov, Head of the Department of Palaeoscience, Palaeotechnology, and UFO Research of the National Security Academy of Russia, following an expedition to the mountains of Gornaya Shoria in Southern Siberia. The photographs appear to depict a set of enormous megaliths and Dr Uvarov is convinced they are man-made structures. Others, however, have argued that they are simple a rare example of the power and wonder of Mother Nature. An expedition headed by Georgy Sidorov was undertaken a team of 19 researchers following information about the existence of a large number of strange megalithic objects on Gornaya Shoria, a mountain reaching 1,100 metres above sea level, and situated in a remote part of Russia which had previously been blocked off by checkpoints during the era of the Soviet Union. The site of the ‘megalith’ stone blocks. The large blocks appear to be stacked on top of each other. By April Holloway

Wayne Herschel author - The Hidden Records - discovered ancient alien star maps around the world showing human star origins - a true story now 'fictionalized' and twisted in PROMETHEUS movie For years Wayne couldn’t quite accept how the so-called Sirius human origin mystery had any solid foundation. Firstly because Sirius had already been proven as non sun-like and confirmed without any planets, and secondly he had found all other ancient civilisations chose another defined star as important. ALL ancient megalithic civilisations according to Wayne’s globally occurring findings held records of their ancestor genesis depicted in many different ways, but all show that their ancestors’ place of origin was the same single 'solar' star in Taurus. In all the other recurring star maps revealed in Wayne’s book, the Orion’s Belt alignment to find the special star in Taurus was repeatedly used. It’s a billion to one chance against the odds that the 1930's alignment claim occurring also with Orion’s Belt, although opposite direction. That’s just one of the obvious glaring clues the previous claim was mistaken. How did researchers confuse this story with Sirius?

Dr. Robert Schoch and Alternative Human History | Earth's International Research Society E.I.R.S. has teamed up with Geologist and University Professor Dr. Robert Schoch in our research efforts of Alternative World History. Our true human history is slowly coming to discovery through the extensive researches of geologists and geophysicists like Robert Schoch. Evidence points to civilizations existing thousands of years beyond what our school books say they do. Here, together with E.I.R.S., Dr. Schoch explains a very important message we both would like to share about what his 20+ years of research has discovered and why it is so important for us to know today. Göbekli Tepe in Turkey, Its Connection to the Great Sphinx of Egypt, and the End of the Last Ice Age: A Warning for Us Today Twenty years ago, based on his geological analyses, Dr. Now there is new and dramatic evidence that supports Dr. Dr. Article Source: Plasma, Solar Outbursts, and the End of the Last Ice Age Dr. By Stephanie Pappas Like this:

The temple complex of Raqchi | notesfromcamelidcountry Having been in Peru for a couple of weeks and spending most of our time amongst ancient Inca ruins I feel like this blog has gotten a bit too archaeological. However, on our way from Cusco to Puno we stopped off at a quite different but equally wonderful set of Inca ruins in Raqchi. I guess that is the thing about the Incas, they constructed an amazing array of towns, forts and ceremonial centres in little more than a century of empire building and they are everywhere you go in Peru. Set amidst beautiful countryside and surrounded by imposing mountains on a clear, crisp morning Raqchi is an impressive and moving sight, and one that could be easily overlooked as you speed past the modern-day village on the road between Cusco and Puno. Temple complex at Raqchi, Peru Raqchi was a major religious centre and home to a temple complex and palace that housed the great and the good of the Inca world. Circular storehouses at the Raqchi temple complex, Peru Temple of Wiracocha, Raqchi, Peru Like this:

Introducing Plasma Mythology Babylon Is Fallen by kate u/v kaia 1. NAME: The master key to the entire system’s/CROWN CORPORATION’S game. 2. 3. 4. 5. 6. 7. The biggest program that we run into with the masses is the sheer disbelief of their own power and who they truly are. We are now at the culmination of destroying these entities once and for all and they are pulling out all the fear porn, illusion and desperation plugs and in that process, they’re sinking their own ship where I merely hand them a better plug-puller now. There is no “middle ground” here, you’re either in or out of Babylon. kate!!! Here is a companion document which contains Kate’s ‘Babylon Is Fallen’, set-up as a printable, foldout brochure. Local Copy for download Mandatory Listening… “The System Exposed” >> Lose The Name << More of kate’s writtings here: by kate of gaia by kate of kaia This Key, I offer all equally, unconditionally, infinitely Life is a fickle game, literally a phi-cull game. by Ninja Bambi Yes!

'Britain's Atlantis' found at bottom of North sea - a huge undersea kingdom swamped by a tsunami 5,500 years ago Divers have found traces of ancient land swallowed by waves 8500 years agoDoggerland once stretched from Scotland to DenmarkRivers seen underwater by seismic scansBritain was not an island - and area under North Sea was roamed by mammoths and other giant animalsDescribed as the 'real heartland' of EuropeHad population of tens of thousands - but devastated by sea level rises By Rob Waugh Published: 23:32 GMT, 2 July 2012 | Updated: 10:49 GMT, 3 July 2012 'Britain's Atlantis' - a hidden underwater world swallowed by the North Sea - has been discovered by divers working with science teams from the University of St Andrews. Doggerland, a huge area of dry land that stretched from Scotland to Denmark was slowly submerged by water between 18,000 BC and 5,500 BC. Divers from oil companies have found remains of a 'drowned world' with a population of tens of thousands - which might once have been the 'real heartland' of Europe. A Greater Britain: How the North Sea grew and the land-mass shrunk

100 Incredible YouTube Channels for History Buffs » Online College Search If you love history, or just want to learn more about it, YouTube has exactly what you need. Always up to the challege of providing thorough, accurate information, YouTube delivers channels from leading names in historical studies, from The Smithsonian to the Discovery Channel. You’re sure to find just the right information you need for your lecture, lesson plan, or perhaps just your personal viewing pleasure. General History These videos can give your students a better insight into historical events. Art History From ancient Greek sculpture to post-Modernism, YouTube has it all. The Smithsonian: Enjoy lectures by renowned experts covering the worlds of art, design, history, culture, science and technology.An Introduction to Art History: This is the introduction to a series of videos discussing art history. Music History How music has changed over the last several hundred years! Cultural History Anthropology is an amazing study with many interesting debates intertwined in theory. U.S. U.S.