Who Were the Sons of God in Genesis 6? 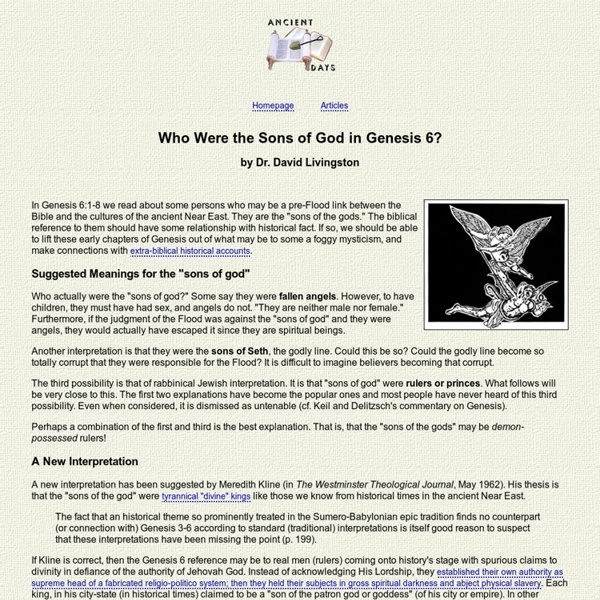 In Genesis 6:1-8 we read about some persons who may be a pre-Flood link between the Bible and the cultures of the ancient Near East. They are the "sons of the gods." The biblical reference to them should have some relationship with historical fact. If so, we should be able to lift these early chapters of Genesis out of what may be to some a foggy mysticism, and make connections with extra-biblical historical accounts. Suggested Meanings for the "sons of god" Who actually were the "sons of god?" Another interpretation is that they were the sons of Seth, the godly line. The third possibility is that of rabbinical Jewish interpretation. Perhaps a combination of the first and third is the best explanation. A New Interpretation A new interpretation has been suggested by Meredith Kline (in The Westminster Theological Journal, May 1962). Thus, the king is divine, he is god, and manifested himself as such especially on the New Year Festival. Divine Kingship What is it? How Divine Kingship Works 1. Related:  Religion

The Myths Behind the Age of Martyrs By Candida Moss For the first three hundred years of its existence, tradition maintains, Christianity was a persecuted and suffering religion. Members were hunted down and executed, their property and books burned by crusading emperors intent on routing out the new religion. Women and children were thrown to the lions and boiled alive in caldrons, as maddened crowds bayed for blood. Jesus, Stephen, and the Apostles were only the beginning. As Christianity grew, so did the ranks of martyrs. The history of early Christianity, as we have received it, is a history of victimization and pain. But that narrative has very little basis in the documentary record. There is almost no evidence from the period before Constantine, traditionally called the Age of Martyrs, to support the idea that Christians were continuously persecuted. Early Christians, like virtually everyone in the ancient world, expanded, updated, and rewrote their sacred texts. Nor is this only Election Day banter.

The bitter tears of the American Christian supermajority The most persecuted minority in the United States is not Muslims, African-Americans or immigrants. It’s our Christian supermajority that’s truly oppressed. Verily, consider three anecdotes from the past few weeks. On March 2, three Baptist ministers in Akron, Ohio, arranged for the local police to mock-arrest them in their churches and haul them away in handcuffs for the simple act of preaching their faith. A video was posted on YouTube to drum up buzz for an upcoming revival show. On Feb. 26, Arizona’s conservative Gov. And the feature film “Persecuted,” a political thriller about a federal government plan to censor Christianity in the name of liberalism, is due out in May. Needless to say (or maybe not) this news ticker of persecuted American Christians floats far and free from reality. To be sure, there are Christians in the world who face persecution, from Copts in Egypt to Catholics in northern Nigeria. What accounts for this orgy of self-pity?

The Lonely Man of Faith The Life of Dorothy Day | March 14, 2014 | Religion & Ethics NewsWeekly Read excerpts from The Duty of Delight: The Diaries of Dorothy Day edited by Robert Ellsberg DEBORAH POTTER, correspondent: On the Lower East Side of Manhattan, just a few blocks from the Bowery, the line forms early outside St. Joseph House. Four times a week, volunteers make gallons of soup from scratch and each day feed more than a hundred men. MICHAEL GREENBERG (Catholic Worker Volunteer): People here personally emulate Christ. I'm not Christian, but I could really respect that. POTTER: Donations keep the soup line going. ROBERT ELLSBERG (Publisher, Orbis Books): She was very young. POTTER: Robert Ellsberg got to know Day near the end of her life and edited her letters and diaries. ELLSBERG: People have an idea that she was somehow sort of scary, because she looks so serious in so many pictures. POTTER: In her late 20s, Day lived with a fellow radical whom she adored but who opposed both marriage and religion. Dorothy Day interview in 1971: If your brother is hungry, you feed him.

Realization of Prophetic Visions Realization of Prophetic Visions By Philip Mark Ames "I know a man in Christ who, fourteen years ago (whether in body I do not know, or outside of the body I do not know; God knows) was caught away to the third heaven. And I know this man (whether in body or apart from the body I do not know; God knows) that was snatched away into paradise, and he heard unspoken sayings which it is not lawful for man to speak." This statement of fact was made by the Apostle Paul in his second letter to the Christians in . (II Cor. 12:1- 4) The third heaven is a reality. The purpose of this book is to disclose the meaning or certain things written by two of those men. To begin with, the term, "heaven", denotes a relatively invisible expanse in which objects can be seen. The three dimensions of geometry (earth-measuring) are mutually inclusive. Beyond these limiting factors, there is at least one more dimension. Another mysterious aspect of the fifth dimension is the visibility of thoughts. Philip Mark Ames

Dispensationalism As a system, dispensationalism is expounded in the writings of John Nelson Darby (1800–82) and the Plymouth Brethren movement,[1]:10 and propagated through works such as Cyrus Scofield's Scofield Reference Bible. The theology of dispensationalism consists of a distinctive eschatological end times perspective, as all dispensationalists hold to premillennialism and most hold to a pretribulation rapture. Dispensationalists believe that the nation of Israel is distinct from the Christian Church,[2]:322 and that God has yet to fulfill his promises to national Israel. These promises include the land promises, which in the future world to come result in a millennial kingdom and Third Temple where Christ, upon his return, will rule the world from Jerusalem[3] for a thousand years. In other areas of theology, dispensationalists hold to a wide range of beliefs within the evangelical and fundamentalist spectrum.[1]:13 Concepts[edit] Progressive revelation[edit] Dispensations[edit] Eschatology[edit]

Ways of Keeping a Prayer Journal :: Deeper Devotion Question “Can you suggest ways of keeping a prayer journal?” —Harry Answer First of all, I have to say I think keeping a prayer journal is a great way to spend time with God. Let me give you my simple method for prayer journaling and then I’ll talk about other ideas you might try. That’s just my method. Media If you like to write by hand, then a notebook may be great for you. If you’d rather type, try keeping a journal in Microsoft Word or just a text editor like Notepad. If you want to go a step further, you could also try keeping your prayer journal online. Methods When you are praying for specific people, try getting a photo of each and putting them in your journal. Prayer is intended to be a conversation. I find that God often teaches me through a “theme of the day” or “theme of the month.” If you find that you are seeing signs of a sin buildup in your life that hasn’t been confessed, spend time just dumping out all those things. Final thoughts

philipyancey Cleaver and Conundrums – Why I Don’t Do Women’s Retreats | HEvencense Update: 6/13/08 It’s been eight months since this thread was originally posted and time for an update. I plan to launch a series exploring “Christian femininity” (”Proverbs 31 and beyond”) in the near future. While the meme doesn’t intend, purport or presume to be the final word – or even an exhaustive rendering of the subject – hopefully it’ll generate some additional thinking, musing, digging and growing. Tis the season for planning this year’s women’s retreat.  In my experience, women’s retreats (as well as most “women’s ministry”) usually serve up the Christian version of lite beer: half the calories with half the taste.  The average women’s retreat doesn’t engage my mind, which gravitates more toward academic and scholarly pursuits.  An over-emphasis on emotions.  Weekend themes of “getting them grounded in the Word” and “growing in Jesus” and such.  Retreats billed as “ya’ll come” that focus on young married women with kids.  Logistics.  My husband isn’t invited. 1. 2. 3.

Jesus's Kingdom Versus Muhammad's Kingdom (IS ISIS ISLAMIC? Part 1) IS ISIS ISLAMIC? — Part 1 By Silas Jesus’s arrest was the second in a series of pivotal events that led directly to His death. Many Jewish leaders wanted Him dead and many Jewish supporters loved Him, and at least one, Peter, fought and was willing to die for Him. Pointedly, Jesus told Peter to stop fighting. A short time later Jesus stated: “My kingdom is not of this world. Jesus did not intend to set up a physical kingdom. There was another kingdom Jesus taught about: the “kingdom of God.” Note however, even after His resurrection His disciples wanted and expected an established physical kingdom (Acts 1:7). Jesus instructed His disciples extensively about the kingdom of God because He desired that it be established and fulfilled in their lives. As God ruled in people’s hearts and minds they changed. During the next few centuries Christianity was persecuted harshly but it spread throughout the Roman Empire. Why didn’t Jesus instruct His followers to establish a physical kingdom on earth?

Iconoclasm "Triumph of Orthodoxy" over iconoclasm under the Byzantine empress Theodora. Late 14th – early 15th century icon. Iconoclasm[Note 1] is the destruction of religious icons and other images or monuments for religious or political motives. In time, the word, usually in the adjectival form, has also come to refer to aggressive statements or actions against any well-established status quo. People who engage in or support iconoclasm are called iconoclasts, a term that has come to be applied figuratively to any individual who challenges "cherished beliefs or venerated institutions on the grounds that they are erroneous or pernicious".[1] Conversely, one who reveres or venerates religious images is called (by iconoclasts) an iconolater; in a Byzantine context, such a person is called an iconodule or iconophile. Iconoclasm may be carried out by people of a different religion, but is often the result of sectarian disputes between factions of the same religion. Religious iconoclasm[edit] ...

Incurvatus in se "Latin: Incurvatus in se" (Turned/curved inward on oneself) is a theological phrase describing a life lived "inward" for self rather than "outward" for God and others. Paul the Apostle wrote of this condition in the Epistle to the Romans 7:15, 7:8-19: For that which I do I allow not: for what I would, that do I not; but what I hate, that do I. [...] It was perhaps Augustine of Hippo who first coined the phrase incurvatus in se.[1] Martin Luther expounded on this in his Lectures on Romans and described this state as: See also[edit] References[edit] External links[edit] The Catholic Luther, an article quoting Luther's use of incurvatus in se.