Moment Invitational 2019 Submission. The 635 - Mirror, Mirror On The Wall: Who's The Fairest Of My Friends? Meet Dara Hart. Awe + Wonder. Liar, Lunatic, or Lord. The Bold Ones. UNWORDABLE. The Hamilton Mixtape: Immigrants (We Get The Job Done) Stock Footage, Stock Photos - Dissolve. Moments - Peter McKinnon. The Directors Series - The Coen Brothers [4.5] The Night Of - Framing a Crime Drama. SHERLOCK: The Art of Symmetry. The Economics of Sex. Daniel Arnold - Odds and Ends. Annoying Things People do in Group Photos.

Moments - A North American Adventure. 30 for 30 Episode 20: What a FANTASTIC idea for a cover page!! Renewal in Motion. 209 Seconds That Will Make You Question Your Entire Existence. Comments. Arguably the most articulate human being the world has seen. 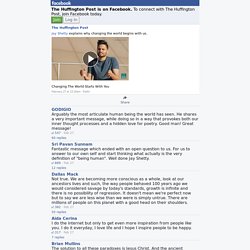 He shares a very important message, while doing so in a way that provokes both our inner thought processes and a hidden love for poetry. Good man! Great message! Sri Pavan Sunnam Fantastic message which ended with an open question to us. Dallas Mack Not true. Aida Cerina I do the internet but only to get even more inspiration from people like you.

Brian Mullins The solution to all these paradoxes is Jesus Christ. Jeremy Daniel Too much focus on opposing themes to clearly state his message. Apoorva Abhinav Technology has killed everything. Alexander Moss Wow he must be so wise, all those opposing metaphors and quoting the Daila Lama as well as Einstein! Tenzin La People have the tendency to 'pay attention' to the 0.01%. Hadrian / Bronze Casting Using The Lost-Wax Technique. "A World Unseen" Documentary. Dear Stranger. How to play piano: The basics, Piano Lesson #1. Existential Bummer. Taylor Swift - Wildest Dreams. Reign of the Fallen: Welcome to the Official Site. Platt Park Brewery Co. AMLI Arista. The Painful Truth About Filmmaking No One Tells You When You're Just Starting Out. 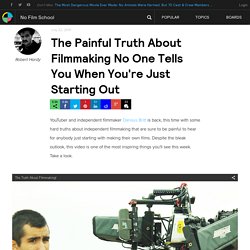 Despite the bleak outlook, this video is one of the most inspiring things you'll see this week. Take a look. The painful truth is this: filmmaking -- particularly the independent variety -- is an uphill battle, and that's putting it mildly. For most of us, every step along the way will be fraught with unforeseen obstacles, most of which we won't have the proper time, money, or physical resources to solve. Some of these obstacles are technical, and can be solved with some ingenuity and a few healthy strips of gaffer's tape. However, many of them are far more debilitating, especially from a psychological perspective. On top of all that, the business of independent filmmaking is perilous -- cutthroat even. Where's the upside in all of this doom and gloom, you ask? One Shot: Brandon Semenuk's unReal Segment. The Innovation of Loneliness. Blood & Oil. This Is a Generic Brand Video. How Often Should You Practice, and How? - Q&A #2. 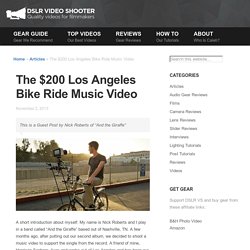 A few months ago, after putting out our second album, we decided to shoot a music video to support the single from the record. A friend of mine, Harrison Sanborn, lives and works out of Los Angeles and has been our go-to director/cinematographer for our music videos in the past, so there wasn’t any question that we were going to work with him for this project as well.

Given that we’re an independent band, our budgets for just about all creative projects may as well look like we found loose change in our couch. We had about $200-$250 to spend on making a music video when we went out to visit Harrison in LA for a week, and we definitely put it to good use. We shot the video with a Black Magic Design cinema camera, a recent purchase by our friend/director. 7 Things I Learned in 7 Years of Reading, Writing, and Living. Reign of the Fallen: Welcome to the Official Site. THE GAP by Ira Glass. THINGS TO KEEP IN MIND. Photos. New York City Postcard - August 2014. Maybe. This Is It. Are You Jealous Of Gaby's Boyfriend? / Just Between Us. Being “The Pretty Girl” Isn’t Always So Pretty In Hollywood: Caitlin Stasey. Friend Third Wheel (w/Just Between Us)