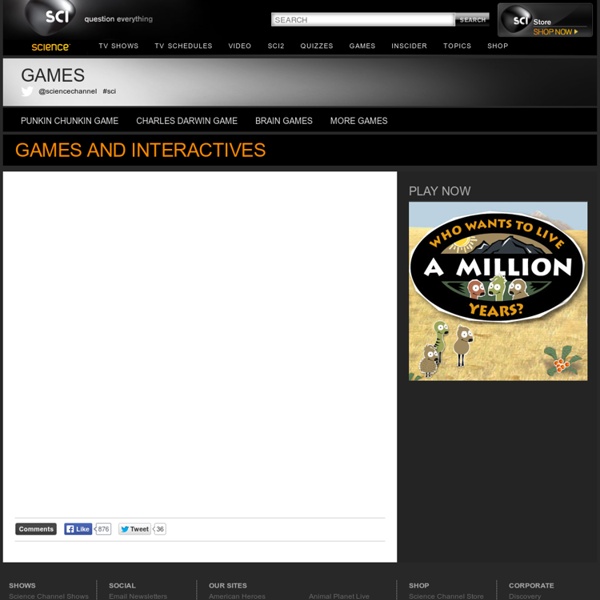 Peppered Moth Simulation Name:______________________________________________ Objective: Simulate changes in moth population due to pollution and predation, and observe how species can change over time. Introduction: Charles Darwin accumulated a tremendous collection of facts to support the theory of evolution by natural selection. One of his difficulties in demonstrating the theory, however, was the lack of an example of evolution over a short period of time, which could be observed as it was taking place in nature.

Science Projects: Animals and Zoology - Education Bug This article has information and ideas for science projects involving animals and zoology for elementary students, middle school, and high school students. Consider these animal and zoology projects for your next science fair. Science projects can assist in getting learning out of the classroom and getting the student beyond the textbook. This set of projects focuses on animals and zoology. Free Game to Practice Chemistry Knowledge! Also available for your iPhone/iPad/iPod here or Android device here. Brought to you by the Chemistry Department at Stetson University. The entire content of this web site is copyrighted by Stetson University under the copyright laws of the United States (Title 17, U.S. Code). You are welcome to repost for educational purposes. Any commercial use is strictly prohibited.

Life Science Learning Goals Which skull is a lizard and which is a snake? During this session, you will have an opportunity to build understandings to help you: Define what is meant by “species.” Describe how new species evolve as a result of variation and adaptation through natural selection. Comprehend a tree of life as a model for depicting evolution and the relatedness of species. It Takes Teamwork: How Endosymbiosis Changed Life on Earth It Takes Teamwork: How Endosymbiosis Changed Life on Earthby the Understanding Evolution team In 1966, microbiologist Kwang Jeon was studying single-celled organisms called amoebae, when his amoebae communities were struck by an unexpected plague: a bacterial infection. Literally thousands of the tiny invaders — named x-bacteria by Jeon — squeezed inside each amoeba cell, causing the cell to become dangerously sick. Only a few amoebae survived the epidemic. However, several months later, the few surviving amoebae and their descendents seemed to be unexpectedly healthy. Had the amoebae finally managed to fight off the x-bacterial infection?

Earth Day Curriculum Resources, Grades K-5 By Phil Nast, retired middle school teacher and freelance writer Found in: Science, PreK-2, 3-5 Explore new and review familiar ways to live responsibly with these lessons, projects, activities, and games for grades K-5. Lesson Plans Cell Structure All living organisms on Earth are divided into cells. The main concept of cell theory is that cells are the basic structural unit for all organisms. Cells are small compartments that hold the biological equipment necessary to keep an organism alive and successful. Living things may be single-celled or they may be very complex such as a human being.

Systems Thinking Games Systems Thinking Games, developed in partnership with Filament Games, are designed to be used by youth and educators to assess systems thinking skills both in the classroom and in afterschool contexts. A precursor to the GlassLab, this project brings together teachers, assessment experts and game designers and developers to collaboratively design and build a suite of games with data tools that support teachers in evaluating the way players approach problem-solving, and the strategies players use in understanding and interacting with complex systems. Currently, research is underway to develop assessment frameworks that yield valid and reliable assessment measures across the suite of digital games.

Life Science Learning Goals Natural variation During this session, you will have an opportunity to build understandings to help you: Recognize how populations vary with regard to inherited traits Distinguish between DNA, chromosomes, and genes Relate genes to variation in populations Describe the process of adaptation through natural selection Video Overview Scientists Watch As Wasps Diverge To Become Separate Species We often think of evolution as something which occurs slowly over millions of years, only being recorded in the fossils that are left behind. But evolution is gradual, with species constantly changing in response to a host of different pressures, from alterations in their environment to changes in other species they reply on. This last point, of species evolving and splitting in response to other species evolving and splitting, is a central concept in biodiversity, but is also a difficult one to prove. A new study has, however, apparently done just this.

Celebrate Earth Day! Grades K – 2 | Lesson Plan | Standard Lesson Digging Up Details on Worms: Using the Language of Science in an Inquiry Study This lesson, in which students research worms in order to create a classroom habitat, incorporates reading and writing across content areas as well as math and science activities. Cell Models: An Interactive Animation Nucleolus: The prominent structure in the nucleus is the nucleolus. The nucleolus produces ribosomes, which move out of the nucleus and take positions on the rough endoplasmic reticulum where they are critical in protein synthesis. Cytosol: The cytosol is the "soup" within which all the other cell organelles reside and where most of the cellular metabolism occurs. Though mostly water, the cytosol is full of proteins that control cell metabolism including signal transduction pathways, glycolysis, intracellular receptors, and transcription factors. Cytoplasm: This is a collective term for the cytosol plus the organelles suspended within the cytosol. Centrosome: The centrosome, or MICROTUBULE ORGANIZING CENTER (MTOC), is an area in the cell where microtubules are produced.

Digital Games Transforming K-12 Assessment and Learning Many teachers are searching for new ways to engage their digital-native students. They are looking for, write researchers at Florida State, “alternative ways of teaching – ways that increase student engagement and yield a rich, authentic picture of the learner(s).” These researchers say more educators should take a look at the latest in digital games. MTS21 - Andrew Knoll - Ancient Life & Evolution Dr. Andrew Knoll is the Fisher Professor of Natural History in Harvard University’s Department of Organismic and Evolutionary Biology, where he studies ancient life, its impacts on the environment, and how the environment, in turn, shaped the evolution of life. In recognition of the 200th anniversary of Charles’ Darwin’s birth and the 150th anniversary of the first printing of his book, “On the Origin of Species”, the American Society for Microbiology has invited Dr.