James Patterson's ReadKiddoRead: The site "which helps parents and educators connect their children with the books that will turn them into lifelong readers." 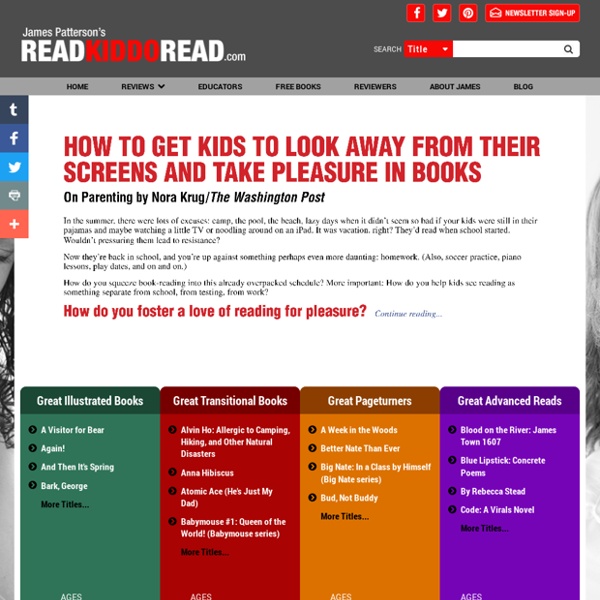 The Hub - Comics may not necessarily seem like a natural fit for music fans, but in reality there are a number of great (and in some cases, even iconic) bands in comics. Best of all, many of these comics feature female musicians and are written or illustrated by women. This list collects a few of the best of these and offers a little something for everyone. Jem and the Holograms Volume 1: Showtime by Kelly Thompson with art by Sophie Campbell – Jerrica is a skilled singer but she also has a serious case of stage fright. When the band that she and her sisters have formed has an opportunity to play as part of a video contest, she finds that she can’t even record their song due to her shyness. While struggling to live up to her sisters’ expectations, she discovers that her father has left her the technology to create a hologram to sing in her place.

YALSA Book and Media Awards and Lists for Libraries *Beginning in February 2017, YALSA will officially launch the new Teen Book Finder Database, which will be a one-stop shop for finding selected lists and award winners. Users will be able to search this free resource by award, list name, year, author, genre and more, as well as print customizable lists. This new resource will replace the individual award and list web pages currently on YALSA’s site that are not searchable and that are organized only by year. Awards I Selected Lists I Reads 4 Teens I Teen Book Finder app While these books and media have been selected for teens from 12 to 18 years of age, the award-winning titles and the titles on YALSA's selected lists span a broad range of reading and maturity levels.

YALSA's Book Awards & Booklists - "The Young Adult Library Services Association (YALSA) is a national association of librarians, library workers and advocates whose mission is to expand and strengthen library services for teens, aged 12-18. " Looking for great teen books? Look no further than YALSA's Book Awards and Selected Booklists. While these books have been selected for teens from 12 to 18 years of age, the award-winning titles and the titles on YALSA's selected lists span a broad range of reading and maturity levels.

Book Buddies: January 2009 The Book Buddies Book Club met this past Monday, January 26th to discuss The Case of the Missing Marquess by Nancy Springer. We had a wonderful book discussion beginning with the topic of historical mysteries and other books of that genre that we've read and enjoyed. We talked about Sherlock Holmes and what we knew about him prior to reading the Enola Holmes mystery. We also talked about codes and ciphers and why Enola's mother chose to communicate with her that way.

Read Kiddo Read is a site developed by James Patterson that promotes reading. The site contains free books and other resources for educators and parents. It also includes many children's book reviews. by kl03645 Sep 11