Unity 3D. Gesture-recognition-unity3d - Gesture recognition from Kinect data using Dynamic Time Warping. Classifies a given action sequence to the class of actions it fits best, and returns the sub-sequence matched as well as the type of action that matched To train it, the input is a segmented action sequence describing the motion. 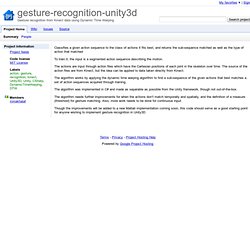 The actions are input through action files which have the Cartesian positions of each joint in the skeleton over time. The source of the action files are from Kinect, but the idea can be applied to data taken directly from Kinect. The algorithm works by applying the dynamic time warping algorithm to find a sub-sequence of the given actions that best matches a set of action sequences acquired through training. The algorithm was implemented in C# and made as separable as possible from the Unity framework, though not out-of-the-box. The algorithm needs further improvements for when the actions don't match temporally and spatially, and the definition of a measure (threshold) for gesture matching. Open source Kinect gesture recognition project, Kinect DTW. Seems like we're on a Gesture recording theme this week so far... 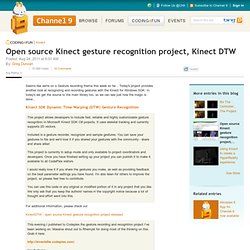 Today's project provides another look at recognizing and recording gestures with the Kinect for Windows SDK. In today's we get the source to the main library too, so we can see just how the magic is done... This project allows developers to include fast, reliable and highly customizable gesture recognition in Microsoft Kinect SDK C# projects. It uses skeletal tracking and currently supports 2D vectors.Included is a gesture recorder, recognizer and sample gestures. You can save your gestures to file and we'd love it if you shared your gestures with the community - share and share alike! For additional information, please check out KinectDTW - open source Kinect gesture recognition project released This evening I published to Codeplex the gesture recording and recognition project I’ve been working on. Project Information URL: Project Download URL: Project Source URL:

Mouse Gesture Recognition. I have worked yesterday on a simple implementation of a mouse gesture recognition algorithm. 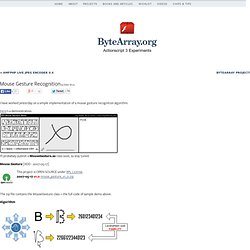 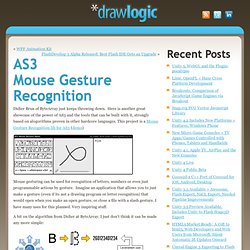 Here is another great showcase of the power of AS3 and the tools that can be built with it, strongly based on alogorithms proven in other hardcore languages. This project is a Mouse Gesture Recognition lib for AS3 (demo) Mouse gesturing can be used for recognition of letters, numbers or even just programmable actions by gesture. Imagine an application that allows you to just make a gesture (even if its not a drawing program or letter recognition) that would open when you make an open gesture, or close a file with a slash gesture.

I have many uses for this planned. A bit on the algorithm from Didier at ByteArray, I just don’t think it can be made any more simple: Flash Webcam into Unity 3D. Background Information Although I created a standalone Windows based (.dll) webcam plugin for Unity3d in May, 2009 utilising Theodore Watson’s – VideoInput library along with some Open CV functions, trying to get a working cross platform Unity3d solution for augmented reality was still heavy on my mind. 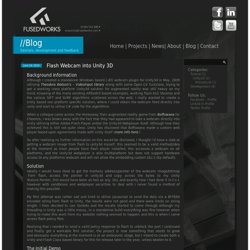 Knowing of the many existing ARToolkit based examples, working flash AS3 libraries and the various SIFT and SURF algorithms scattered across the web, I really wanted to create a Unity based non platform specific solution, where I could obtain the webcam feed directly into unity and start to utilise C# code for the algorithms. When a collegue came across the Honeyway Train augmented reality game from Boffswana for Cheerios, I was blown away with the fact that they had appeared to take a webcam directly into Unity utilising either Adobe Flash Player and/or the Unity3d Webplayer itself. Solution. Unity and Kinect tutorial « Nightmare Kitty.