Libya remains volatile: UN Mission:Tuesday 16 September 2014. Tens of thousands of civilians in Benghazi, Tripoli and elsewhere have been driven from their homes due to indiscriminate shelling by rival militias. 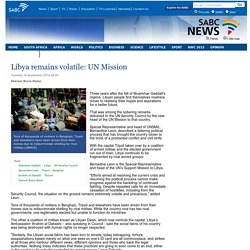 (UNHCR) Three years after the fall of Muammar Gaddafi's regime, Libyan people find themselves nowhere closer to realising their hopes and aspirations for a better future. UN envoy confident Libya factions can seal deal:Thursday 27 August 2015. Libya's security has rapidly deteriorated as Islamic State and other armed groups not linked to either government exploit the power vacuum. 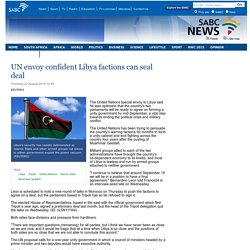 (REUTERS) The United Nations special envoy to Libya said he was optimistic that the country's two parliaments will be ready to agree on forming a unity government by mid-September, a vital step towards ending the political crisis and military conflict. The United Nations has been trying to persuade the country's warring factions for months to form a unity cabinet and end fighting across the country four years after the ousting of Muammar Gaddafi. Militant groups allied to each of the two administrations have brought the country's oil-dependent economy to its knees, and most of Libya is lawless and run by armed groups attached to neither government.

"I continue to believe that around September 10 we will be in a position to have a final agreement," Bernardino Leon told France24 in an interview aired late on Wednesday. Libyan factions sit at the same table in UN peace talks:Monday 29 June 2015. New round of talks among Libya's rival parliaments warring factions has been underway in the Moroccan coastal town of Skhirat since Friday. 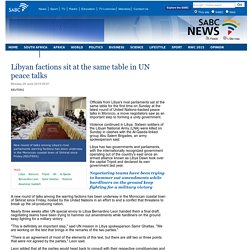 (REUTERS) Officials from Libya's rival parliaments sat at the same table for the first time on Sunday at the latest round of United Nations-backed peace talks in Morocco, a move negotiators saw as an important step to forming a unity government. Violence continued in Libya. Sixteen soldiers of the Libyan National Army (LNA) were killed on Sunday in clashes with the Al-Qaeda-linked group Abu Salem Brigades, an army spokesperson said.

Libya has two governments and parliaments, with the internationally recognized government operating out of the country's east since an armed alliance known as Libya Dawn took over the capital Tripoli and declared its own government last year. Negotiating teams have been trying to hammer out amendments while hardliners on the ground keep fighting for a military victory. UN to host new round of Libya talks in Morocco:Monday 8 June 2015. Thousands of Libyans are reportedly gravely concerned about the deteriorating conditions in their country(REUTERS) The United Nations (UN) on Monday plans to host a new round of talks in Morocco among Libya's warring factions in an effort to end a conflict that threatens to break-up the oil producer. 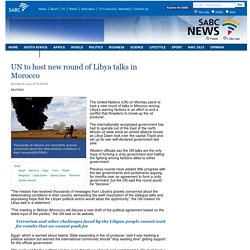 The internationally recognised government has had to operate out of the East of the north African oil state since an armed alliance known as Libya Dawn took over the capital Tripoli and set up its own self-declared government last year. Libyan unity talks resume as UN warns that time is running out:Wednesday 3 June 2015. Libya is also a concern for the EU as migrants fleeing strife in the Middle East and Africa use Libya's coast to launch boats to cross the sea to Europe. 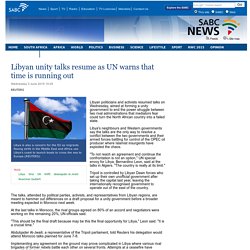 (REUTERS) Libyan politicians and activists resumed talks on Wednesday, aimed at forming a unity government to end the power struggle between two rival administrations that mediators fear could turn the North African country into a failed state. Libya's neighbours and Western governments say the talks are the only way to resolve a conflict between the two governments and their armed forces battling for control of the OPEC oil producer where Islamist insurgents have exploited the chaos. "To not reach an agreement and continue the confrontation is not an option," UN special envoy for Libya, Bernardino Leon, said at the talks in Algiers.

"The country is really at its limit. " UN top official pessimistic about Libya peace:Thursday 30 April 2015. Many are fleeing Libya amidst increased violence and instability as the country has become a hotbed for armed attacks,terrorism and trafficking. 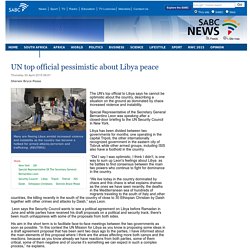 (REUTERS) The UN's top official to Libya says he cannot be optimistic about the country, describing a situation on the ground as dominated by chaos increased violence and instability. Special Representative of the Secretary General Bernardino Leon was speaking after a closed-door briefing to the UN Security Council in New York. UN plans future Libya talks:Thursday 29 January 2015. Talks to end the Libya crisis have been moved from Geneva. 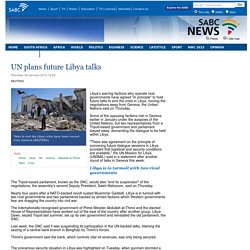 (REUTERS) Libya's warring factions who operate rival governments have agreed "in principle" to hold future talks to end the crisis in Libya, moving the negotiations away from Geneva, the United Nations said on Thursday. Some of the opposing factions met in Geneva earlier in January under the auspices of the United Nations, but key representatives from a Tripoli-based government and parliament stayed away, demanding the dialogue to be held within Libya. "There was agreement on the principle of convening future dialogue sessions in Libya, provided that logistical and security conditions are available," the UN Mission for Libya (UNSMIL) said in a statement after another round of talks in Geneva this week.