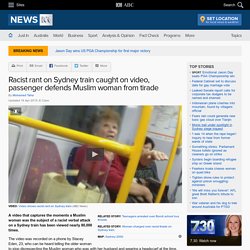 Video: Video shows racist rant on Sydney train (ABC News) A video that captures the moments a Muslim woman was the subject of a racist verbal attack on a Sydney train has been viewed nearly 80,000 times. The video was recorded on a phone by Stacey Eden, 23, who can be heard telling the older woman to stop disrespecting the Muslim woman who was with her husband and wearing a headscarf at the time.

Ms Eden, a pathology worker, told the ABC she was catching a train home to Mascot on the Airport Line at around 1:40pm on Wednesday afternoon. She said she noticed a group of people enter the train, particularly a man and woman wearing a scarf with a baby. At that point she said an old lady walked over and started speaking to them. "I was just listening to my music," Ms Eden said. "The old lady actually bent over and touched the lady's scarf while she was talking.

"I didn't think anything of it. " Can you believe discrimination against pregnant women and parents are still rife in Australia? 91 per cent of women who were discriminated against while pregnant or returning to work didn’t file a formal complaint. 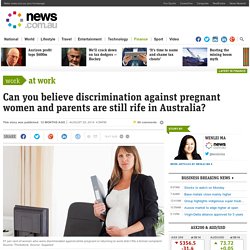 Source: Thinkstock. Source: Supplied JUST over a year ago, Julianne*, a tax accountant, found out she was pregnant. She had been in her profession for nine years and had been with her company for six years when she broke the news to her bosses. In her six years with the accounting firm in Brisbane, Julianne had been a star performer and was on the leadership track. So she was not prepared for what came next. When she told her bosses she was pregnant, she was immediately freezed-out by management and most of her colleagues. After the initial cold shoulder period, she was moved out of her office into a much smaller one. One in two women experience discrimination when they’re pregnant or returning to work from parental leave. Woman wins discrimination case. A matter of principle: Julia Haraksin outside court. 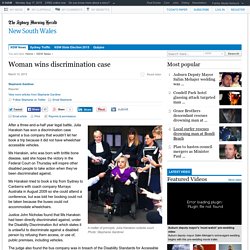 Photo: Stephanie Gardiner After a three-and-a-half year legal battle, Julia Haraksin has won a discrimination case against a bus company that wouldn’t let her book a trip because it did not have wheelchair accessible vehicles. Ms Haraksin, who was born with brittle bone disease, said she hopes the victory in the Federal Court on Thursday will inspire other disabled people to take action when they’ve been discriminated against. Ms Haraksin tried to book a trip from Sydney to Canberra with coach company Murrays Australia in August 2009 so she could attend a conference, but was told her booking could not be taken because the buses could not accommodate wheelchairs.

Justice John Nicholas found that Ms Haraksin had been directly discriminated against, under the Disability Discrimination Act which states it is unlawful to discriminate against a disabled person by refusing them access, or use of, public premises, including vehicles. Age discrimination reported by 27% of older workers in Australia.

More than a quarter of employees aged 50 and over reported experiencing some form of age-based discrimination in the workplace, a new report by the Human Rights Commission has found. 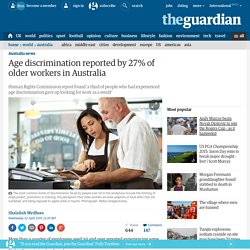 A survey of 2,109 people shows that 27% of older workers said they were the victim of discrimination on at least one occasion in the last two years. That figure jumps to 41% of low-income earners, defined as those who make $35,000 or less a year. A much higher ratio of single parents with dependent children (45%) reported age-based discrimination in the workplace than those whose children had left home and those without children. What Happens When A Black Man And A White Woman Speak For Each Other. Darius Simpson and Scout Bostley begin to speak into their individual microphones -- but then they stop, switch mics and start talking again. 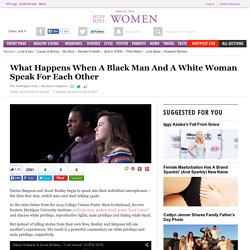 In the video below from the 2015 College Unions Poetry Slam Invitational, the two Eastern Michigan University students perform their spoken word poem "Lost Voices" and discuss white privilege, reproductive rights, male privilege and dating while black. But instead of telling stories from their own lives, Bostley and Simpson tell one another's experiences.

The result is a powerful commentary on white privilege and male privilege, respectively. When the two trade their respective privileges they're allowed to say things they normally wouldn't be able to. Bostley says things that Simpson cannot because he is black, while Simpson says things Bostley cannot because she's a woman. Bostley shares Simpson’s experience as a young black man, while Simpson mouths the words. Then Simpson takes over to speak for Bostley. Racism experiment - Barber Shop.