The Veggie Queen - Inspiring Ideas for Plant Based Eating. Pressure Cooker Archives. White Bean Stew with Winter Squash and Kale October 22, 2013 I’ve been hearing the internet chatter about the wonders of Rancho Gordo beans for a while, but with no Whole Foods in my town (yet), I thought I wouldn’t get a chance to try them unless I ordered them. 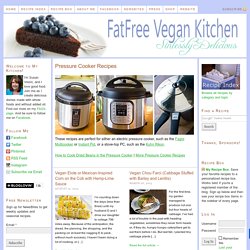 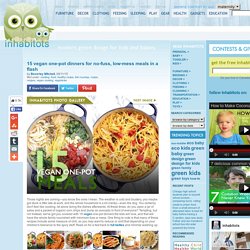 Easy creamy tomato barley risotto Let’s start off super simple with Oh She Glows‘ nourishing and comforting barley-based risotto. This dish comes in handy for those times when children are being a bit, ahem, challenged by being able to identify vegetable morsels in their food. RELATED | 10 Delicious Vegan Slow Cooker Dishes Photo: Oh My Veggies 2. Riffing on the one-pot grain-plus-veggies theme, this tasty rice dish from Oh My Veggies is full of child-friendly vegetables such as corn and peas. Photo: Apron Strings 3. Thanks to Martha Stewart, one-pot pasta recipes abound on the interwebs. Pasta Fagioli with Cranberry Beans and Kale. Since the weather got cooler, I’ve been making a lot more soups and stews. 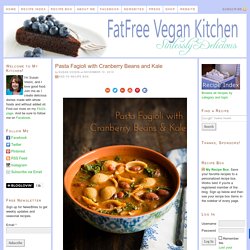 And since I’ve been test-driving a new Instant Pot (more about that in an upcoming post), I’ve been pressure cooking a lot of dried beans. So it was only natural to use my new gadget to make a soup/stew starting with dried beans. But don’t worry–you don’t have to have a pressure cooker to make this thick, Italian-inspired soup because I’ll tell you how to make it in either a pressure cooker or in a regular pot on the stove. Cranberry beans are pretty when dried but lose their vibrant color when cooked.

I’ve had these beautiful cranberry beans sitting in a jar in my kitchen for a while, and though they make for an attractive decoration, beans do get old and should be used before they’re eligible for social security. I was actually very surprised at how much my family loved this dish. Be sure to check out my other pressure cooker recipes, all of which can be cooked in an electric or traditional pressure cooker. Notes. Aloo Chana Masala - Potato Chana Masala Recipe (Pressure Cooker Method) - Edible Garden. Aloo Chana Masala made in a pressure cooker – This is a one-pot, or rather, one-pressure-cooker side dish that can be put together in a jiffy. 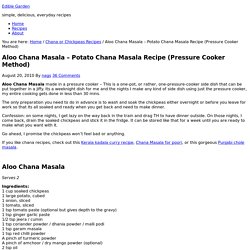 Its a weeknight dish for me and the nights I make any kind of side dish using just the pressure cooker, my entire cooking gets done in less than 30 mins. The only preparation you need to do in advance is to wash and soak the chickpeas either overnight or before you leave for work so that its all soaked and ready when you get back and need to make dinner. Confession: on some nights, I get lazy on the way back in the train and drag TH to have dinner outside. On those nights, I come back, drain the soaked chickpeas and stick it in the fridge. It can be stored like that for a week until you are ready to make what you want with it. Go ahead, I promise the chickpeas won’t feel bad or anything. If you like chana recipes, check out this Kerala kadala curry recipe, Chana Masala for poori, or this gorgeous Punjabi chole masala. Healthy Girl's Kitchen: Looking for Recipes for Your Instant Pot Electric Pressure Cooker? Or Some Confidence With It? Plus Another Fantastic Giveaway!

As I write this blog posting, I've got a pot of Chef Aj's Split Pea Soup with Sweet Potatoes cooking in my electric pressure cooker. 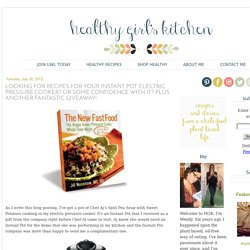 It's an Instant Pot that I received as a gift from the company right before Chef Aj came to visit. Aj knew she would need an Instant Pot for the demo that she was performing in my kitchen and the Instant Pot company was more than happy to send me a complimentary one. Now that said, I would not promote a product that I do not fully believe in, just because I received one for free. I only have the time and energy to tell you guys about the good stuff! So it seems that quite a few HGK readers have purchased an Instant Pot since Aj's visit and my blog postings about the Instant Pot a few months ago. I also discovered (with the help of Healthy Girl's Kitchen's Facebook fans) that Instant Pot has a series of help videos on their website. Better yet, here's a fan-freakin-tastic recipe for Chef Aj's Red Lentil Chili that you can make this week in your Instant Pot.