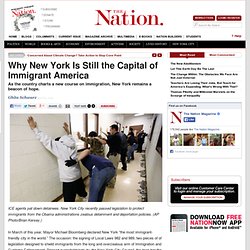 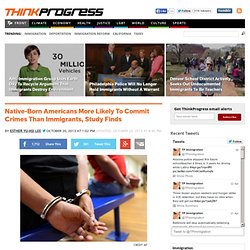 In fact, when it comes to crime rates, second-generation offenders are merely “catching up” to the native-born population, as the Pew Research Center’s data blog Fact Tank reported. Les podcasts de L'UniverCité. Immigrant Archive Project: Immigrant Stories shared on video. The women who do it all but don’t have it all.

Blurring The Border To See Two Sides : The Picture Show. Hide caption Liliana (Lily) Ramos reaches over her daughter toward her dog, Linda. 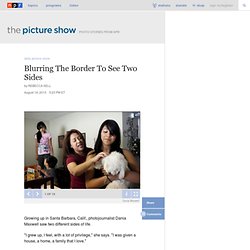 Lily had heard pets help people deal with difficult situations, so she got the dog after she was ordered to be deported. Dania Maxwell Hide caption A framed picture of Lily with her two girls at her home in Bend, Ore. Lily left the picture and her kids — Brian, Ashley and Karleen — with a relative when she was deported to Mexico. "No quiero que sufren," she said. "I don't want them to suffer. " Hide caption "I wanted to visit my mom, but you're not allowed to leave the country while on your leave," Victor says in front of his home in Bonita Springs, Fla.

Growing up in Santa Barbara, Calif., photojournalist Dania Maxwell saw two different sides of life. How should we assess both the costs and benefits of immigration reform? In the coming days the Congressional Budget Office (CBO) will issue a “score” (price tag) on the Senate immigration bill. 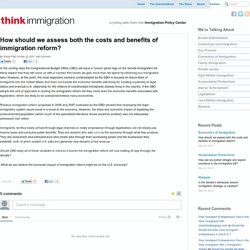 Many expect that they will come up with a number that shows we gain more than we spend by reforming our immigration laws. However, at this point, the most expansive scenario contemplated by the CBO is focused on future flows of immigrants into the United States and does not include the economic benefits stemming for creating a pathway to legal status and eventual U.S. citizenship for the millions of unauthorized immigrants already living in the country.

Stand With Families: National AAPI Day of Action for Immigration Reform, June 5. Will you stand with families? 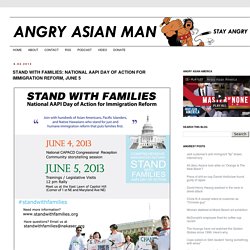 Tomorrow is the National AAPI Day of Action for Immigration Reform. Stand With Families is a mobilization taking place in Washington DC on Wednesday, June 5. Hundreds of Asian Americans, Pacific Islanders, Alaska Natives and Native Hawaiians will be gathering from all over the United States to call for a just and humane immigration reform that puts families first. Community members will share stories, visit their legislators, and hold a Rally on the steps of the United States Capitol. To read real stories of individuals affected by immigration reform, go to standwithfamilies.org. GC Immigration Working Group: John Jay Immigration and Deportation Initiative : Events. From the initiative's description: The initiative is intended to bring the continuing legislative efforts around immigration – and the discourse that surrounds them – into the community life and curriculum of the college, to generate debate and conversation, and to engage our students (nearly half of whom are themselves immigrants or the children of immigrants) intellectually with issues that will likely have direct and profound effects on their own lives and those of their loved ones. 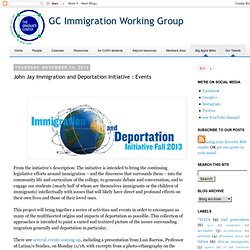 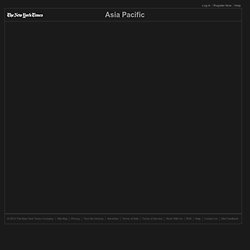 Mr. Li was a farmer until three years ago, when the local government razed his village for an urban development zone. Chongqing, one of the fastest-growing and biggest cities on earth, with a population of 29 million. The old buildings under the high-rises are destined for demolition in the near future. Diaspora groups as essential bridge builders - New Canadian Media - NCM. By Alice Musabende in Ottawa and Jacky Habib in Toronto Diaspora populations are increasingly being seen as “bridge builders” between host countries and the nations they come from, particularly amid crisis situations as with the recent earthquake in Haiti. 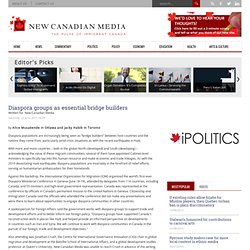 With more and more countries – both in the global North (developed) and South (developing) – acknowledging the value of these migrant communities, several of them have appointed Cabinet-level ministers to specifically tap into this human resource and make economic and trade linkages. As with the 2010 devastating Haiti earthquake, diaspora populations are invariably in the forefront of relief efforts, serving as humanitarian ambassadors for their homelands. Against this backdrop, the International Organization for Migration (IOM) organized the world’s first-ever Diaspora Ministerial Conference in Geneva (June 18-19), attended by delegates from 114 countries, including Canada, and 55 ministers and high-level government representation.