Eng intro. Official Site for News, Information and Events. Home. Living in Ireland. A guide to the rights of migrants in Ireland Crosscare Migrant Project January 2015. Cork City Integration Strategy. New Integration Strategy. Background On 28th March 2014, the Minister for Justice and Equality announced that there would be a review of Ireland’s approach to the integration of migrants to ensure that the policy remained fully in keeping with the Government’s commitment in the Programme for Government to promote policies which contribute to integration. 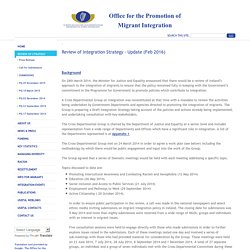 A Cross Departmental Group on Integration was reconstituted at that time with a mandate to review the activities being undertaken by Government Departments and agencies directed to promoting the integration of migrants. The Group is preparing a Draft Integration Strategy taking account of the policies and actions already being implemented, and undertaking consultation with key stakeholders. 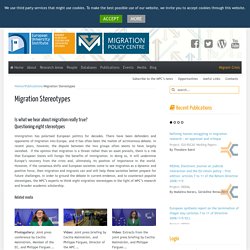 There have been defenders and opponents of migration into Europe, and it has often been the matter of acrimonious debate. In recent years, however, the dispute between the two groups often seems to have largely vanished. If the opinion that migration is a threat rather than an asset prevails, there is a risk that European States will forego the benefits of immigration. In doing so, it will undermine Europe’s recovery from the crisis and, ultimately, its position of importance in the world. However, if the consensus shifts and European societies come to see migration as a dynamic and positive force, then migration and migrants can and will help these societies better prepare for future challenges.

Related media Photogallery: Joint press conference by Cecilia Malmström, Member of the EC, and Philippe Fargues … Video: Joint press briefing by Cecilia Malmström, and Philippe Fargues, Director of the MPC … Full report Articles in the press. I am a migrant. International Organization for Migration. Syrians in Ireland: ‘It feels like life has been on pause for years’ It’s a midweek evening in Thurles, Co Tipperary and the Syrian-Irish card game is well under way. 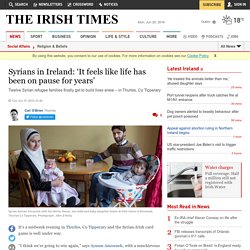 “I think we’re going to win again,” says Ayman Amouneh, with a mischievous grin. There’s laughter and ribbing, in a mixture of English and Arabic. When Ayman and other Syrian men arrived here a year ago, they were taught to play blackjack by locals from the Men’s Shed organisation. Now, they’re beating them at their own game. “It a nice break,” he says. Thurles has been home to 12 Syrian refugee families for the past year or so who moved here as part of a State-funded resettlement project. It has tested families, whose lives have been disrupted and traumatised by years of conflict. But it has also challenged the town to meet the needs of new members of the community, at a time when unemployment and affordable housing are highly sensitive issues. Most families have been housed in middle-class housing estates, scattered across the town, with no sign of opposition from neighbours. 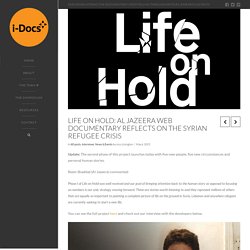 Reem Shaddad (Al Jazeera) commented: Phase I of Life on Hold was well received and our goal of bringing attention back to the human story as opposed to focusing on numbers is our only strategy moving forward. These are stories worth listening to and they represent millions of others that are equally as important to painting a complete picture of life on the ground in Syria, Lebanon and anywhere refugees are currently seeking to start a new life.

You can see the full project here and check out our interview with the developers below. The war in Syria has raged on for four years, claiming thousands of lives and displacing almost a third of the population. “Technology is to be used as a means not as an end in itself” A focus on audience engagement extends into Life on Hold as well, which has two layers; the documentary layer and user-generated content. No Borders.