In the process, it created a lost generation – second and third children who went unregistered, couldn’t go to school, and who continue to live in the shadows. Nathan VanderKlippe explores the human and economic costs of one of the biggest social experiments in history Desperate to raise the immense sum needed to purchase official identity for her nine-year-old son, Little Jie, Lu Cuiping (shown above with her son) tried to sell a kidney, but was told she was too old. ‘I have thought about robbing a bank,’ she says. Little Jie, in a yellow cap and grey hoodie, darts out the doors of his school and across the road to where his mother is waiting to pick him up for lunch. While his mother, Lu Cuiping, steams vegetables inside their small apartment on the outskirts of Beijing, he brings out a Lego navy frigate, which in his hands becomes a Chinese vessel mounting assaults on the enemy.

“He’s very patriotic,” Ms. Ms. Refugees don’t need our tears. They need us to stop making them refugees. Life expectancy increases but gap widens between rich and poor. Life expectancy is rising faster than thought, with 90 expected to become the norm in some affluent areas of the country by 2030, putting further pressure on pensions, health and social services, according to new research. 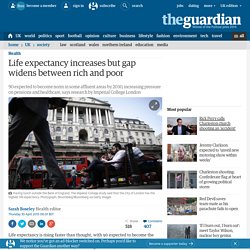 But the gap between rich and poor continues to widen. Eshima-ohashi-bridge-this-bridge-in-japan-is-like-something-out-of-mario-kart... It looks as though it should serve as a speed ramp connecting Mario Circuit with Rainbow Road, but in fact connects the cities of Matsue and Sakaiminato, spanning a mile across Lake Nakaumi. 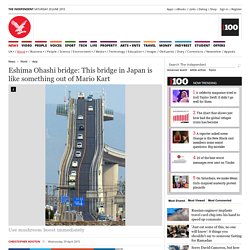 It has a gradient of 6.1 per cent on the Shimane Prefecture side and 5.1 per cent on the Tottori Prefecture side, making it appear like the apex of a rollercoaster. Terrifying as it might be to drive up, it's not the world tallest vehicular bridge - that accolade goes to France's Millau Viaduct, which is taller than the Eiffel Tower reaching 270m above the valley below. As for footpaths, the Sidhue River Bridge in China stands at a palm-sweating 460m. Loading gallery. Explicit cookie consent. An extraordinary escape: survivors of migrant boat disaster tell their stories. When more than 800 people drowned last month in the Mediterranean’s worst modern shipwreck, Ibrahim Mbalo almost joined the dead at the bottom of the sea. 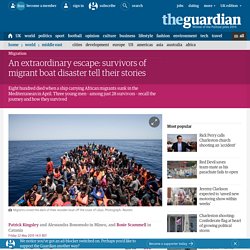 As the boat began to sink below the surface, Mbalo, a 20-year-old Gambian labourer, was trapped underwater below decks, unable to escape. When the water gushed in, another drowning man had pulled him by his trousers towards the bottom of the flooded cabin, which was now essentially a massive water tank filled with flailing men. Mbalo was stuck. “Will I die?” He thought as he was dragged downwards. Through extraordinary perseverance and luck, Mbalo achieved the latter – one of just 28 young men to make it out alive. Samba Kamar, 20, hadn’t even wanted to be on the boat in the first place. For a year, Kamar worked as a labourer for a wealthy Libyan. “I thought I was going to Mali,” Kamar remembered. By Kamar’s account, he, Yamadou and their fellow prisoners were held under duress in a cramped house for a month and 18 days.

“Will I die?” The cartoon that sums up the world's 'migrant crisis' In recent months, Europe has looked on with horror at the deaths of thousands of people in the Mediterranean as they drowned trying to make their way from the Middle East and North Africa into the EU. 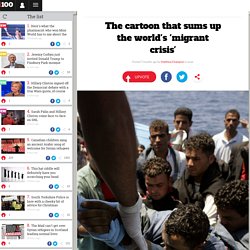 Many people have been left alienated by the rhetoric surrounding the story, from accusations of hate speech directed at Sun columnist Katie Hopkins to home secretary Theresa May confirming she wanted to return people fleeing their own countries back to where they came from. The below cartoon has been shared a lot on social media in relation to the deaths in the Mediterranean. But the cartoon is actually from 2014 and from Australian cartoonist Simon Kneebone, who drew it in response to boats of people trying to reach Australia from Indonesia. Migration: Are more people on the move than ever before? - BBC News. From the Mediterranean to the Andaman, it's been a season of despair, the faces of migrants haunting television screens and dominating headlines. 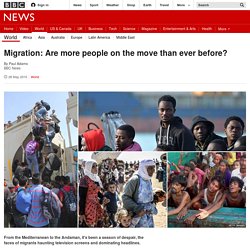 Harrowing stories have emerged of death, starvation and abuse at the hands of people smugglers. And from the world's new and continuing conflict zones, there have been new mass movements, across borders and within states. Half a million Yemenis have been internally displaced since March. One hundred thousand Burundians have fled into neighbouring countries since April. The statistics can be numbing - 7.6 million Syrians, homeless inside their own country, now make up a fifth of all internally displaced people (IDPs) in the world. Are more people on the move than ever before? Today's map of the world is a complex spider's web of movement. Germany passes Japan to have world's lowest birth rate - study - BBC News. A study says Germany's birth rate has slumped to the lowest in the world, prompting fears labour market shortages will damage the economy. 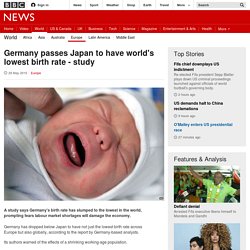 Germany has dropped below Japan to have not just the lowest birth rate across Europe but also globally, according to the report by Germany-based analysts. Its authors warned of the effects of a shrinking working-age population. They said women's participation in the workforce would be key to the country's economic future. In Germany, an average of 8.2 children were born per 1,000 inhabitants over the past five years, according to the study by German auditing firm BDO with the Hamburg Institute of International Economics (HWWI). It said Japan saw 8.4 children born per 1,000 inhabitants over the same time period. In Europe, Portugal and Italy came in second and third with an average of 9.0 and 9.3 children, respectively.

Germany’s birth rate lowest in the world according to study - Europe - World - The Independent. The country has dropped below Japan to take the lowest birth rate globally, according to the study by the Hamburg Institute of International Economics (HWWI), prompting fears that labour market shortages could damage the economy. 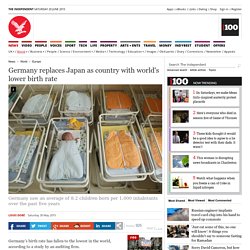 The authors of the study also said that women’s participation in the workforce would be key to the country’s economic future, and warned that a shrinking working-age population could have negative effects. Germany saw an average of 8.2 children born per 1,000 inhabitants over the past five years. Burma seizes boat with 700 migrants aboard - Asia - World - The Independent. Myo Win, the township administrator of Hainggyi Island, said the boat was taken to nearby Leik Island and the migrants were kept on board while they were provided with food, water and medical help. 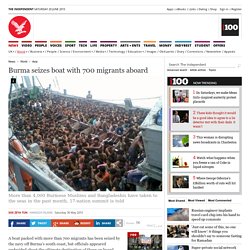 “The boat won’t rest at Leik Island tonight ... I heard they will be taken to Sittwe or Maungdaw [in Rakhine State], to then be sent to Bangladesh.”