Malaysia mass graves: villagers tell of migrants emerging from secret jungle camps. The residents of Wang Kelian sensed something was amiss when a number of people stumbled on to their streets, weak and injured, and began to beg for food and water. 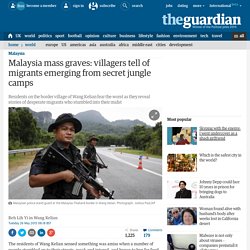 “They would walk into my shop, with injuries covering their hands and feet. Some were just too weak to even speak properly,” said Lyza Ibrahim, who runs a food stall in the town on the northern Malaysian border with Thailand. “One asked me, ‘[Is this] Malaysia?’ Then he pointed in the other direction, said ‘Thailand’ and shook his head to signal that he was not wanted there.” Wang Kelian is an unassuming settlement but it has been thrust into the global spotlight this week after the discovery in nearby jungle of dozens of secret camps used by people smugglers and nearly 140 grave sites.

Police say some of those graves contain multiple bodies – raising the terrible prospect of hundreds of unexplained deaths. Some of the campsites included wooden pens, some with barbed wire and guarded by sentry posts. Others echoed her story. Malaysia says it will turn away migrants stranded at sea unless boats are sinking. A crisis involving boatloads of Rohingya and Bangladeshi migrants stranded at sea has deepened as Malaysia said it would turn away any more of the vessels unless they were sinking. 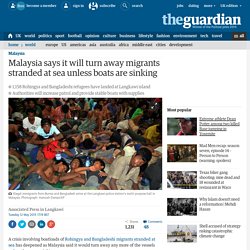 If the boats are sinking, they would rescue them, but if the boat are found to be seaworthy, the agency will provide “provisions and send them away”, he said. Indonesia sends three warships and a plane to turn away migrant boats. The Indonesian navy prevented a suspected migrant boat from entering the country’s waters at the weekend after the arrival of hundreds of Rohingya and Bangladeshi people and has stepped up patrols in the area, the military said Monday. 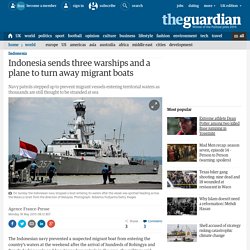 'They hit us, with hammers, by knife': Rohingya migrants tell of horror at sea. Crowded under tarpaulin tents strewn with rubbish and boxes of water, the Burmese and Bangladeshi migrants speak of horrors at sea: of murders, of killing each other over scarce supplies of food and water, of corpses thrown overboard. 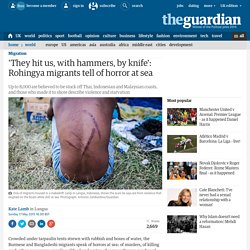 “One family was beaten to death with wooden planks from the boat, a father, a mother and their son,” says Mohammad Amin, 35. “And then they threw the bodies into the ocean.” Amin, an ethnic Rohingya Muslim, first boarded a boat from Burma three months ago. Now he is among 677 migrants who arebeing housed in a makeshift camp by the harbour in Langsa, Indonesia, after spending months in the Andaman Sea.

Getting to the camp was an epic struggle. But at least now they are on dry land. South-east Asia faces its own migrant crisis as states play 'human ping-pong' Obscured by the uproar over migrant trafficking in the Mediterranean, the dire plight of tens of thousands of refugees, asylum-seekers and economic migrants fleeing Burma and Bangladesh by sea has passed largely unremarked by western politicians and media. 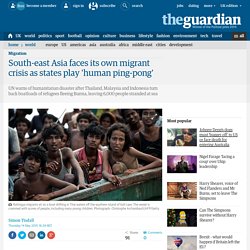 But this week’s callous move by Malaysian patrol ships to turn back two boats carrying about 600 people, many in critical physical condition, and similarly unconscionable, coordinated actions by Thailand and Indonesia may soon shift attention to one of the world’s other big migration crises. After a government decision to close Malaysian ports, officials confirmed on Thursday that the two refugee boats had been intercepted off Langkawi and Penang islands, on Malaysia’s western littoral, and forced back out to sea. It is believed one of these boats was later found drifting in Thai waters, where authorities have also made its occupants unwelcome.

“About 10 people died during the journey. Asian migrant crisis grows as 700 asylum seekers rescued off Indonesia. Another 700 Rohingya and Bangladeshi migrants were rescued off Indonesia on Friday, police said, as Burma undermined calls for a coordinated response to the human-trafficking crisis by threatening to boycott a planned south-east Asia summit. 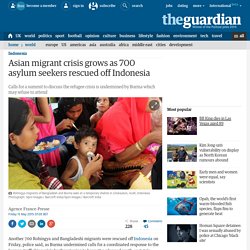 Indonesian police said passengers aboard the latest vessel seeking safe harbour in the region recounted how their boat sank off the country’s coast after earlier being driven away by Malaysia. Activists estimate up to 8,000 migrants are at sea in south-east Asia. But the decision by Indonesia, Malaysia and Thailand to turn away stricken boats filled with starving Bangladeshis and ethnic Rohingya from Burma has been met with outrage, including from the US and UN.

“According to initial information we got from them they were pushed away by the Malaysian navy to the border of Indonesian waters,” said Sunarya, police chief in the city of Langsa in Aceh province, where the migrants arrived. “We gave them ready-to-eat meals. Malaysia and Thailand turn away hundreds on migrant boats. Thousands of Rohingya Muslims and Bangladeshis abandoned at sea by human traffickers have nowhere to go after Malaysia turned away two boats crammed with more than 800 migrants, and Thailand kept at bay a third boat with hundreds more. 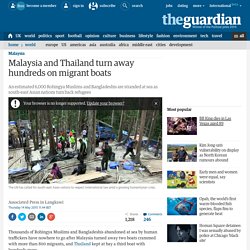 “What do you expect us to do?” Malaysian deputy home minister Wan Junaidi Jafaar said. “We have been very nice to the people who broke into our border. We have treated them humanely but they cannot be flooding our shores like this.” “We have to send the right message that they are not welcome here,” he said, just days after about 1,000 refugees landed on the shores of Langkawi, a popular resort island in northern Malaysia near Thailand.

The Thai prime minister, Prayuth Chan-ocha, said his government did not have resources to host refugees. “If we take them all in, then anyone who wants to come will come freely. How to solve the Asian migrant boats crisis – expert views. Between 6,000 and 8,000 refugees, asylum seekers and economic migrants from Burma and Bangladesh are currently stranded in boats off the coasts of Malaysia, Thailand and Indonesia, with the governments of all three nations refusing to allow the boats to land. 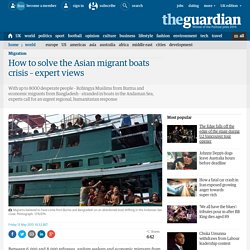 With reports of deaths on board and thousands more lives at risk, the Guardian asked a panel of experts how the crisis could be solved. Lilianne Fan Bangkok-based expert on humanitarian and conflict issues in Asia, research associate at the humanitarian policy group of the UK’s Overseas Development Institute The solution really has to be a humanitarian approach, making sure lives are not lost and looking at temporary solutions in each of the affected countries – Malaysia, Thailand and Indonesia.

Fundamentally this is an issue of statelessness and citizenship. The temporary solution is a settlement arrangement for the asylum seekers and refugees who are coming to these countries. Charles Santiago David Manne Jeff Labovitz.