The Platonic Solids and Sacred Geometry 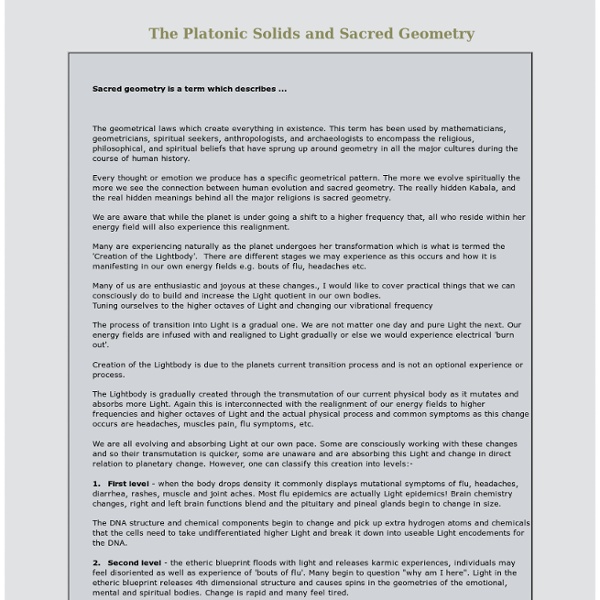 Sacred geometry is a term which describes ... The geometrical laws which create everything in existence. This term has been used by mathematicians, geometricians, spiritual seekers, anthropologists, and archaeologists to encompass the religious, philosophical, and spiritual beliefs that have sprung up around geometry in all the major cultures during the course of human history. Every thought or emotion we produce has a specific geometrical pattern. We are aware that while the planet is under going a shift to a higher frequency that, all who reside within her energy field will also experience this realignment. Many are experiencing naturally as the planet undergoes her transformation which is what is termed the 'Creation of the Lightbody'. Many of us are enthusiastic and joyous at these changes., I would like to cover practical things that we can consciously do to build and increase the Light quotient in our own bodies. The process of transition into Light is a gradual one. 1. 2. 3. 4. 5. Related:  in between two worlds

About Sacred Geometry Introduction Sacred Geometry is the blueprint of Creation and the genesis of all form. It is an ancient science that explores and explains the energy patterns that create and unify all things and reveals the precise way that the energy of Creation organizes itself. On every scale, every natural pattern of growth or movement conforms inevitably to one or more geometric shapes. As you enter the world of Sacred Geometry you begin to see as never before the wonderfully patterned beauty of Creation. The molecules of our DNA, the cornea of our eye, snow flakes, pine cones, flower petals, diamond crystals, the branching of trees, a nautilus shell, the star we spin around, the galaxy we spiral within, the air we breathe, and all life forms as we know them emerge out of timeless geometric codes. Viewing and contemplating these codes allow us to gaze directly at the lines on the face of deep wisdom and offers up a glimpse into the inner workings of the Universal Mind and the Universe itself. 1.

Sex magic Paschal Beverly Randolph[edit] The earliest known practical teachings of sex magic in the Western world come from 19th-century American occultist Paschal Beverly Randolph, under the heading of The Mysteries of Eulis: If a man has an intelligent and loving wife, with whom he is in complete accord, he can work out the problems [of how to achieve magical results] by her aid. They are a radical soul-sexive series of energies...The rite is a prayer in all cases, and the most powerful [that] earthly beings can employ...it is best for both man and wife to act together for the attainment of the mysterious objects sought. Success in any case requires the adjuvancy of a superior woman. The entire mystery can be given in very few words, and they are: An upper room; absolute personal, mental, and moral cleanliness both of the man and wife. Randolph himself was greatly influenced by the work of English Rosicrucian and scholar of phallicism, Hargrave Jennings. Ida Craddock[edit] Aleister Crowley[edit]

The Flower of Life The flower of life holds a secret through which one can discover the most important and sacred pattern in the universe. This is the source of all that exists; it’s called the Fruit of Life. It contains 13 informational systems. Each one explains another aspect of reality. If you overlay a map (after getting the correct scale) with the complete flower of life, all sacred sites, standing stones etc, will sit at the centre of six points. The creator’s consciousness is said to exist within the sphere and the only thing that physically exists is the membrane of the sphere itself. This “first step” is not to be confused with the “first day”, the latter being in reference to the seven days of creation. The first day is believed to be the creation of the Vesica Piscis, then the creation of the Tripod of Life on the second day, followed by one sphere added for each subsequent day until all seven spheres construct the Seed of Life on the sixth day of Creation. The Egg of Life The Flower of Life

21 Ways to Raise Your Vibration Last updated on April 28, 2014 Posted on January 18, 2013 at 12:00 am EDT by in5d Alternative News * Click HERE to visit our Official Facebook page and be sure to “Like” us!!! (opens in a new window) * Also visit in5D Connection where you can find your soul mate or join one of our amazing groups. EVERYONE is welcome! by Christina Sarich According to the numerous wisdom teachings, Lao Tzu, Edison, Gregg Braden, Carl Jung, Joseph Campbell, the Buddha, Ken Wilber, Louis Hay, the Dalai Lama, Paramahansa Yogananda, Dr. Our past scientific assumptions have been erroneous more than once. understand. You’ve been hearing it everywhere. There is a learning curve. Find something of beauty and just appreciate it. sidewalk. Make a list of all that you are grateful for. Meditate. Related: What to do BEFORE You Meditate Do something for someone else. Change your DNA. Listen to music you love. Stop complaining and gossiping. Move. Do something a little crazy. Not sure where you are vibrating? instant.

Astrotheology, the Holy Science Those very same people left us Spiritual Wisdom too. Love of Wisdom has always been the highest virtue of Man. Philosophy comes from two Greek words, Love & Wisdom. The ruling families created counterfeit philosophical organizations (Corporate religions/ churches) to replace the three branches (Logic, Ethics, Physics) of Philosophy with Dogma and Doctrine, Fear, Superstition and ignorance. and explain how the powers that be, (The Elite Oligarchies) through their religious, political, monetary, corporate (etc) institutions, have been suppressing the true Science/ Religion that was bequeathed to us by more advanced civilizations i.e.: Egypt, Babylon, Persia, India, Greece etc. The science of the stars and soul. This is the knowledge that they prefer we do not have. Syncretism shows how all the Ancient Legendary Stories, Myths, Bibles, Fairy Tales etc, all have one simple common origin. Socrates’ guiding rule was: “Know Thyself.” ‘The kingdom of God is within you’ ~ Jesus ©2014 Santos

Ancient Sumerians In Ecuador: The Father Crespi Mystery… | Hidden Inca Tours In the Amazonian Ecuadorian region called Morona Santiago there is a very deep cavern, known in Spanish as Cueva de los Tayos (Cave of the Oilbirds). According to some researchers the true discoverer of the huge archaeological treasures of the Cueva de los Tayos was not the Hungarian Juan Moricz, but rather the Salesian priest Carlo Crespi (1891-1982), a native of Milan, Italy. Carlo Crespi, who arrived to the Amazonian Ecuador area of Cuenca in 1927, was able to win the trust of the natives Jibaro, and so they did deliver to him, over decades, hundreds of fabulous archaeological pieces dating back to an unknown time, many of them made of gold or golden, often masterfully carved with archaic hieroglyphs that, to date, no one has been able to decipher. From 1960 Crespi obtained from the Vatican the permission to open a museum in the city of Cuenca, where was located his Salesian mission. We have 2 major tours of Peru and Bolivia left in 2014; see details below: Full details Here

What is Kundalini and how to Activate it? I can recall in my spiritual journey a time of inner purification, which steadily integrated and unleashed soul through my being. Each step was like a home coming - a remembrance of who I was and where I really came from. But nothing was quite like the power of Kundalini Reactivation: the unification of higher and lower self, which I experienced as the top of my head lifting off and a fountain of light connecting me deep into the cosmos. This truly was like coming home! So what exactly is Kundalini and how do we activate it?... What is Kundalini? To me the soul is a flowing stream of consciousness, out from the source and back again. Most - if not all - have suffered the loss of this inherent condition early in life. We can reactivate this kundalini. How to activate Kundalini? Firstly, it greatly helps to keep reminding yourself of the higher connection through spiritual practice. But this connection to higher self is not the end of the story. Opening the channels for Kundalini

The Human Body in Symbolism - The Secret Teachings of All Ages Index Previous Next p. 73 THE oldest, the most profound, the most universal of all symbols is the human body. The Greeks, Persians, Egyptians, and Hindus considered a philosophical analysis of man's triune nature to be an indispensable part of ethical and religious training. The Mysteries of every nation taught that the laws, elements, and powers of the universe were epitomized in the human constitution; that everything which existed outside of man had its analogue within man. THE THREEFOLD LIFE OF THE INNER MAN. Dr. Robert Schoch and Alternative Human History | Earth's International Research Society E.I.R.S. has teamed up with Geologist and University Professor Dr. Robert Schoch in our research efforts of Alternative World History. Our true human history is slowly coming to discovery through the extensive researches of geologists and geophysicists like Robert Schoch. Evidence points to civilizations existing thousands of years beyond what our school books say they do. Göbekli Tepe in Turkey, Its Connection to the Great Sphinx of Egypt, and the End of the Last Ice Age: A Warning for Us Today Twenty years ago, based on his geological analyses, Dr. Now there is new and dramatic evidence that supports Dr. Dr. Article Source: Below is an explanation of the role that our sun played in the changing of our last ice age by Dr. Plasma, Solar Outbursts, and the End of the Last Ice Age 15,000 to 11,000 years ago Earth experienced a series of climatic fluctuations. How do we explain this pattern of abrupt climatic shifts? Dr.

Aura - Learn to see your Aura image with your own eyes What is the Aura ?Everything in the Universe seems to be just a vibration. Every atom, every part of an atom, every electron, every elementary “particle”, even our thoughts and consciousness are just vibrations. Hence, we may define the Aura as a electro-photonic vibration response of an object to some external excitation (such as an ambient light for example). This definition is sufficient for the purpose of reading Auras, providing that we can train ourselves to see the Aura vibration.The most important property of the Aura seems to be the fact that it contains INFORMATION about the object.Aura around living (conscious) objects (people, plants ...) changes with time, sometimes very quickly. Aura around non-living object (stones, crystals, water...) is essentially fixed, but can be changed by our conscious intent.

The Art of the Bath Ritual. Via Ruth Randallon Sep 23, 2014 There I was, breathing, meditating, trying to find the space between thoughts that brings the beginning of wisdom. Or so I had read. Suddenly I hear, “Do you know what that sound is, highness? The perfect bath isn’t about getting clean, exactly. Warm water is a primal, comforting element. Rituals ground us, bind us to our lives and help us find meaning. Like a secret handshake with ourselves, personal rituals show us what is important in our lives. The Recipe A measure of Epsom or Mineral salts ~1/2 cup Essential oils 3 candles (at least) Warm-Hot water (obviously) 5 rose quartz crystals or perhaps Fluorite Before you run the bath place several drops of essential oils onto the salt and allow it to sit for a few minutes so that the oil binds to the salt. The Ritual Your ritual can be dynamic and responsive to your needs. Lie back and let the scent take you where it will. I usually find myself floating in a beautiful meadow. I stay there until I feel relaxed. The Oils