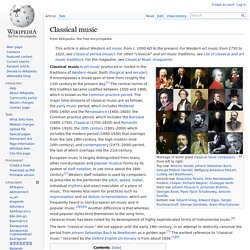 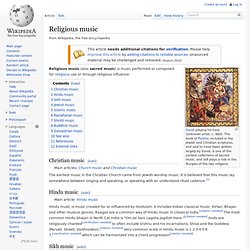 The book of Psalms, included in the Jewish and Christian scriptures, and said to have been written largely by David, is one of the earliest collections of sacred music, and still plays a role in the liturgies of the two religions. Religious music (also sacred music) is music performed or composed for religious use or through religious influence. Christian music[edit] The earliest music in the Christian Church came from Jewish worship music. It is believed that this music lay somewhere between singing and speaking, or speaking with an understood ritual cadence.[1]

Church music. Church music is music written for performance in church, or any musical setting of ecclesiastical liturgy, or music set to words expressing propositions of a sacred nature, such as a hymn. 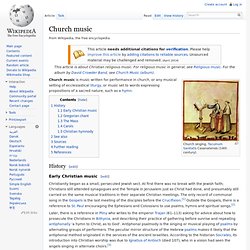 History[edit] Early Christian music[edit] Christianity began as a small, persecuted Jewish sect. At first there was no break with the Jewish faith; Christians still attended synagogues and the Temple in Jerusalem just as Christ had done, and presumably still carried on the same musical traditions in their separate Christian meetings. Thomas Tallis (1505-1585) O sacrum convivium, Thomas Tallis. Roman School. History and characteristics[edit] 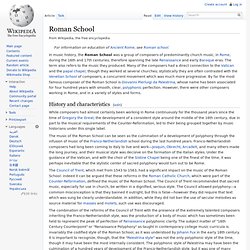 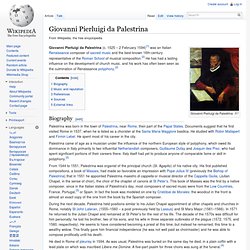 Documents suggest that he first visited Rome in 1537, when he is listed as a chorister at the Santa Maria Maggiore basilica. He studied with Robin Mallapert and Firmin Lebel. Palestrina came of age as a musician under the influence of the northern European style of polyphony, which owed its dominance in Italy primarily to two influential Netherlandish composers, Guillaume Dufay and Josquin des Prez, who had spent significant portions of their careers there. He died in Rome of pleurisy in 1594. 'Sanctus' & 'Benedictus': Missa Papae Marcelli * Palestrina / Tallis Scholars 1980. The Tallis Scholars sings Palestrina. G. P da Palestrina - Sicut cervus (Poznańskie Słowiki) [FSSP] Pie JESU, Palestrina. Giovanni Pierluigi da Palestrina - Tu es Petrus. 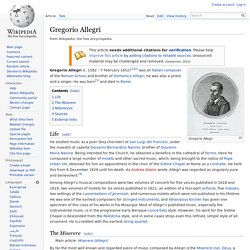 He was born[3] and died in Rome. Gregorio Allegri's Miserere mei, Deus. Gregorio Allegri (1582 - 1652) was a singer in the Papal Chapel from 6th December 1629, until his death on 17th February 1652. He is almost exclusively known for his falsobordone setting of Psalm 51 (Vulgate Psalm 50), the Miserere mei, despite numerous other worthy compositions. Most will know this choral work for its haunting top C, sung by one voice in a small choir, and the sweeping harmony of the larger choir, separated by simple plain chant, and also the myths surrounding its performance by the Sistine Chapel Choir. But Allegri's original is far removed from this received version, so what has happened over the years to transform the work? History beguiles us with tales of secret ornamentation – the so called abbellimenti – never written down, but simply passed from performer to performer in the Papal Chapel. It was de rigeur for those on the Grand Tour in the 18th century to hear the work in the Sistine Chapel during Holy Week. 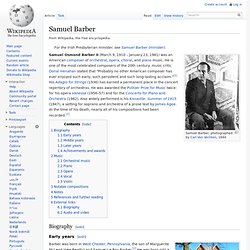 Adagio for Strings. History[edit] Barber's Adagio for Strings began as the second movement of his String Quartet, Op. 11, composed in 1936 while he was spending a summer in Europe with his partner Gian Carlo Menotti, an Italian composer who was a fellow student at the Curtis Institute of Music.[2] The inspiration came from Virgil's Georgics. 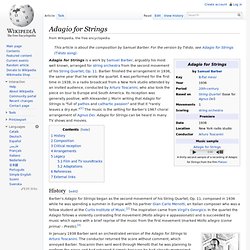 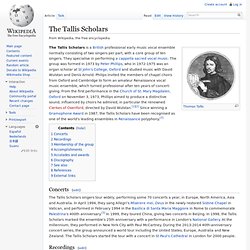 In accordance with Philips, The word Gimell comes from the Latin word ‘gimellus’, meaning ‘a twin’, and it’s a technical term. It’s a corrupt form of the word gimellus that you find in manuscripts of the Tudor school where the part is twinned. Soon, there was a critical consensus that, "the Tallis Scholar's recordings are of reliably high quality".[6] Between 1981 and 2006, the group recorded 40 critically acclaimed discs.[3] The recordings covered a repertoire from over 150 years of music history (approximately the years 1450–1600), with some excursions into later repertoire.