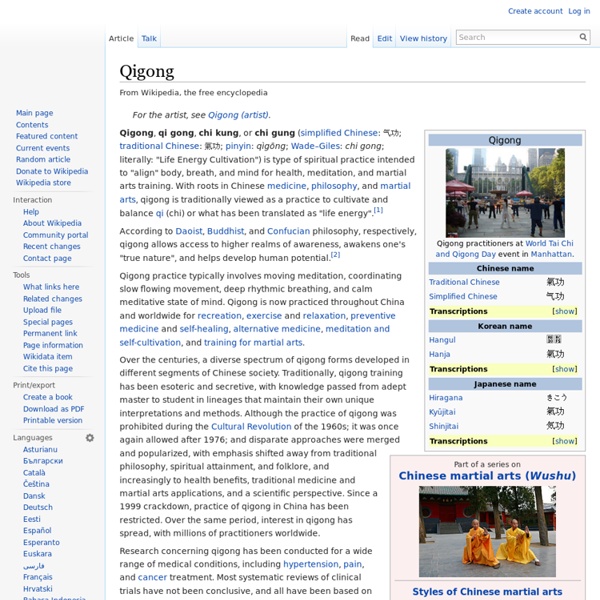 What is Qigong? :: National Qigong Association Qigong is an ancient Chinese health care system that integrates physical postures, breathing techniques and focused intention. The word Qigong (Chi Kung) is made up of two Chinese words. Qi is pronounced chee and is usually translated to mean the life force or vital-energy that flows through all things in the universe. The second word, Gong, pronounced gung, means accomplishment, or skill that is cultivated through steady practice. Qigong is an integration of physical postures, breathing techniques, and focused intentions. Qigong practices can be classified as martial, medical, or spiritual. Like any other system of health care, Qigong is not a panacea, but it is certainly a highly effective health care practice. Qigong creates an awareness of and influences dimensions of our being that are not part of traditional exercise programs. The gentle, rhythmic movements of Qigong reduce stress, build stamina, increase vitality, and enhance the immune system. What is Qigong?

Foundation for the Law of Time - Welcome to the New Time Mirror neuron A mirror neuron is a neuron that fires both when an animal acts and when the animal observes the same action performed by another.[1][2][3] Thus, the neuron "mirrors" the behavior of the other, as though the observer were itself acting. Such neurons have been directly observed in primate species.[4] Birds have been shown to have imitative resonance behaviors and neurological evidence suggests the presence of some form of mirroring system.[4][5] In humans, brain activity consistent with that of mirror neurons has been found in the premotor cortex, the supplementary motor area, the primary somatosensory cortex and the inferior parietal cortex.[6] The function of the mirror system is a subject of much speculation. Discovery[edit] Further experiments confirmed that about 10% of neurons in the monkey inferior frontal and inferior parietal cortex have "mirror" properties and give similar responses to performed hand actions and observed actions. Origin[edit] In monkeys[edit] In humans[edit]

Yijin Jing The Yijin Jing (simplified Chinese: 易筋经; traditional Chinese: 易筋經; pinyin: Yìjīnjīng; Wade–Giles: I Chin Ching; literally: "Muscle/Tendon Change Classic") is a Qigong manual containing a series of exercises, coordinated with specific breathing and mental concentration, said to enhance physical health dramatically when practiced consistently. In Chinese yi means change, jin means "tendons and sinews", while jing means "methods". This is a relatively intense form of exercise that aims at strengthening the muscles and tendons, so promoting strength and flexibility, speed and stamina, balance and coordination of the body.[1] In the modern day there are many translations and distinct sets of exercises all said to be derived from the original (the provenance of which is the subject of some debate). These exercises are notable for being a key element of the physical conditioning used in Shaolin training. Origins[edit] Modern Scholarly Research[edit] Yijin Jing – The Forms[edit] Quietness Slowness

Natural Time Update The Traditional Mayan Calendar Cholq'ij as taught by the Maya Elders of Guatemala is distinct from the 13-Moon Dreamspell Calendar system featured on this website Both the Traditional Mayan Calendar (known as Cholq'ij) and the 13-Moon Calendar (known as Dreamspell) offer a 260-day cycle. This count of 260 energies is generated from the 13 numbers in concert with the 20 glyphs (13 X 20 = 260), originated through the Olmec/Maya of ancient Mesoamerica. Undoubtedly, we recognize the "Classic Maya" and their astounding pyramid complexes as embodying a profound mastery of the science of Time which surpasses all other civilizations. Dr. This new revelation of the powers of the 13:20 matrix came to be called "The Law of Time," and the subsequent 13-Moon Dreamspell calendar system they presented to us is specifically for those of us living in a modern world that is, by its very design, founded on an artificial timing frequency. As Dr. Some feel that Dr. As Dr. To learn more about Dr.

Oscillating Matter - Ethics Wiki All molecules in existence are energies that vibrates/oscillates in the space time continuum. That is, any matter above the temperature of zero degree Kelvin vibrates. 0° Kelvin, also known as "Absolute Zero", translates into −273.15° Celsius and −459.67° Fahrenheit. What we call physical matter is nothing more than energy that’s sort of atracting or repeling each other. Negative energy attracts Positive energy and sticks to it's orbit, as Complementary opposites. Our senses are vibrational perceivers. There’s no real colors out there. Energy can be picked up by scientific tools and mapped out onto computer screens, charts, diagrams, and so on. Our saliva digests the food through chemical reaction which lets us taste it. “Concerning matter, we have been all wrong. Vibrations/Oscillations/Waves are repetitive variation, typically in time, of some measure about a central value. States of Existence in Matter form Edit Solid Edit Liquid Gas States of Existence in Energy form Electrtricity Sound

Baduanjin qigong The Baduanjin qigong(八段錦) is one of the most common forms of Chinese qigong used as exercise.[1] Variously translated as Eight Pieces of Brocade, Eight-Section Brocade, Eight Silken Movements or Eight Silk Weaving, the name of the form generally refers to how the eight individual movements of the form characterize and impart a silken quality (like that of a piece of brocade) to the body and its energy. The Baduanjin is primarily designated as a form of medical qigong, meant to improve health.[2] This is in contrast to religious or martial forms of qigong. However, this categorization does not preclude the form's use by martial artists as a supplementary exercise, and this practice is frequent.[2] History[edit] This exercise is mentioned in several encyclopedias originating from the Song Dynasty. Nineteenth century sources attribute the style to semi-legendary Chinese folk hero General Yue Fei,[4] and describe it as being created as a form of exercise for his soldiers. The sections[edit]

Solar Healing Center Tang Yau Hoong - artist/ illustrator/ graphic designer The Five rules of Yijin Jing are:QuietnessLike lake... Crystalinks Home Page How to use Jung's Word Association Test by Robert Winer, M.D. Neurology, Psychiatry, Psychopharmacology, Neuropsychiatry, and Psychotherapy How to use Jung's Word Association Test (2002) by Robert I. Winer, M.D. One of Jung's first English language papers on the subject is taken from his lecture notes from an address given at the Clark University in Massachusetts in September, 1909. The lecture has been re-published in numerous books. In the lecture, Jung presents his method of using 100 words to identify abnormal patterns of response as a means to identify psychological complexes, along with what he calls "intellectual and emotional deficiencies." I follow, with some modifications, the original method as described by Jung. My Method My philosophy here is that the clinician wants a test that's relatively quick, easy-to-do, and reproducible across patients. To link to the form that I use for the test, click here. 1. Here's what I say to the patient. 2. I use a table to record the test results. 3. The reproduction method was invented by Jung to "fine-tune" the accuracy of examiner identified complexes. 4. C = comment. 5. 6. 7.

Things to keep in mind before practising Yi jin Jing