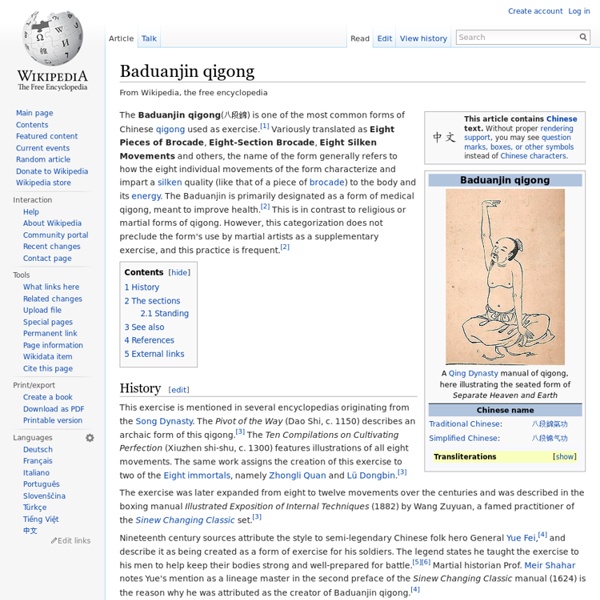 The Baduanjin qigong(八段錦) is one of the most common forms of Chinese qigong used as exercise.[1] Variously translated as Eight Pieces of Brocade, Eight-Section Brocade, Eight Silken Movements and others, the name of the form generally refers to how the eight individual movements of the form characterize and impart a silken quality (like that of a piece of brocade) to the body and its energy. The Baduanjin is primarily designated as a form of medical qigong, meant to improve health.[2] This is in contrast to religious or martial forms of qigong. However, this categorization does not preclude the form's use by martial artists as a supplementary exercise, and this practice is frequent.[2] History[edit] This exercise is mentioned in several encyclopedias originating from the Song Dynasty. Nineteenth century sources attribute the style to semi-legendary Chinese folk hero General Yue Fei,[4] and describe it as being created as a form of exercise for his soldiers. The sections[edit] Related:  China

Iran and China Have Signed a Strategic Pact. That’s Bad News for the West. A recently leaked document suggests that China and Iran are entering a 25-year strategic partnership in trade, politics, culture, and security. Cooperation between China and Middle Eastern countries is neither new nor recent. Yet what distinguishes this development from others is that both China and Iran have global and regional ambitions, both have confrontational relationships with the United States, and there is a security component to the agreement. China’s growing influence in East Asia and Africa has challenged U.S. interests, and the Middle East is the next battlefield on which Beijing can challenge U.S. hegemony—this time through Iran. Internally, the agreement can be an economic lifeline for Iran, saving its sanctions-hit, cash-strapped economy by ensuring the sale of its oil and gas to China. For China, the pact can help guarantee its energy security. China grasps Iran’s position and importance as a regional power in the new Middle East. U.S. U.S.

Qigong Energy & Magnets How China lost central and eastern Europe Bulgaria became the most recent country from central and eastern Europe (CEE) to show hostility toward China. In the latest sign of relations souring between the region and the Asian superpower, Bulgaria’s prime minister, Boïko Borissov, claimed that a series of compromising pictures, appearing to show him sleeping with a gun and wads of cash by his bedside, were acquired by his opponents with a drone supplied by the Chinese government. This was the same Borissov who had hosted a China-CEE summit 2018 in Sofia despite persistent EU pressure not to do so. Bulgaria is not the only country in the region to have qualms about China. In the Czech Republic, Prague city council ended its sister-city relationship with Beijing in October 2019 in favour of a partnership with Taipei. In May, the Lithuanian foreign minister called for Taiwan to be reinstated to the World Health Organization. 17 + China For China, the region promised cheap access to European markets. Just for the photo-op

The Twelve Primary Qi Channels - Part 1 Here will briefly review the twelve primary Qi channels along with the eight extraordinary meridians. You should also know the organ's Yin and Yang. In our body, there are six Yang organs and six Yin organs. Each Yang organ is associated with and harmonized by a Yin organ. Paired Yin and Yang organs belong to the same phase in the Five Phases. In the limbs, the Yang channels are on the external side of the limbs while the Yin channels are on the internal side. The organs are further subdivided in order to distinguish the different levels of the Yin/Yang characteristics. Lung Channel of Hand Greater Yin The lungs (Yin) and the large intestine (Yang) are considered paired organs. In Qigong practice, since the lungs belong to Metal, they are able to regulate heartburn. Breathing is considered a strategy for leading Qi to the extremities such as skin and hair. The lungs are sensitive to emotional changes, especially when you are sad or angry. End of Part 1

Coca-Cola influences China’s obesity policy, BMJ report says | Business The Coca-Cola Company has shaped China’s policies towards its growing obesity crisis, encouraging a focus on exercise rather than diet and thereby safeguarding its drinks sales, an academic investigation has alleged. Susan Greenhalgh, a Harvard academic and China scholar, says Coca-Cola has exerted its influence since 1999 through a Chinese offshoot of an institute founded in the US by the then Coca-Cola vice-president Alex Malaspina with substantial company funding. The International Life Sciences Institute (ILSI) has been heavily criticised in the US and Europe for promoting exercise and downplaying the need for people to cut down on excessive sugary drinks. China has a serious and growing obesity problem: 42.3% of Chinese adults were overweight or obese in 2011, up from 20.5% in 1991. ILSI-China, says Greenhalgh, has influence in government circles. The message was promulgated in China through ILSI-China, the BMJ paper says.

Vietnam’s defense policy strikes a balance between China and the US As China grows more assertive in the South China Sea, Vietnam has started seeing the country as a major threat. Beijing risks pushing Hanoi into America’s orbit if it continues to play hardball. By Umair Jamal In 2019, Vietnam published a national defense white paper—its first in a decade—that offers insight into how Hanoi’s thinking is changing regarding China’s strategy in the South China Sea. The document notes that China’s maritime ambitions in the South China Sea have complicated Beijing’s relationship with Vietnam despite other signs that the two governments were growing closer. As Beijing becomes increasingly assertive in the South China Sea, Vietnam said that it will “promote defense cooperation” with outside powers, including potentially with the United States. Despite frustration over Beijing’s maritime actions, Vietnam would ideally want to maintain its neutrality with respect to the two major powers. Vietnam-China tensions rise on multiple fronts Related

The Philippines pushes back against China’s maritime militia in the Julian Felipe Reef With China’s recent incursions into the South China Sea, the Philippines is taking a stronger stance to protect its maritime territories. By Andrea Chloe Wong “I am no fool… The weather has been good so far, so they have no other reason to stay there. These vessels should be on their way out. This was the scathing statement of the Philippines’ Secretary of National Defense, Delfin Lorenzana, against the presence of Chinese vessels at the Julian Felipe (or Whitsun) Reef, an area near the Philippines named after the composer of the country’s national anthem. A war of words between Philippines and China In response to Lorenzana’s statement, the Chinese Embassy in the Philippines asserted Beijing’s claims to the area and tried to justify the presence of its vessels, saying “The Niu’e Jiao is part of China’s Nansha Islands… It is completely normal for Chinese fishing vessels to fish in the waters and take shelter near the reef during rough sea conditions.” China tests the alliance Related

Chinese astronomy | A guide to ancient stargazing in China - BBC Sky at Night Magazine Chinese astronomers have been studying the night sky for longer than any other culture. The oldest star maps and the earliest records of sunspots have been unearthed by archaeologists in China, where a unique way of looking at the night sky developed about 1,200 BC. Chinese astronomers Gan De and Shi Shen are credited as the first to create star catalogues in the 4th century BC, and the Buddhist monk Yi Xing conducted an astronomical survey in the 8th century AD to help with the prediction of solar eclipses. Discover more guides like this via our History of Astronomy webpage. Chinese or Lunar New Year starts on the day after the first new Moon that falls between 21 January and 20 February (in the Gregorian calendar) and ends with the next full Moon. You may also know about the ancient Chinese belief that a solar eclipse occurs when a dragon eats the Sun. China’s star lore divides the sky into four groups of 283 asterisms (‘xing guan’). It looks set to become a world-class facility.