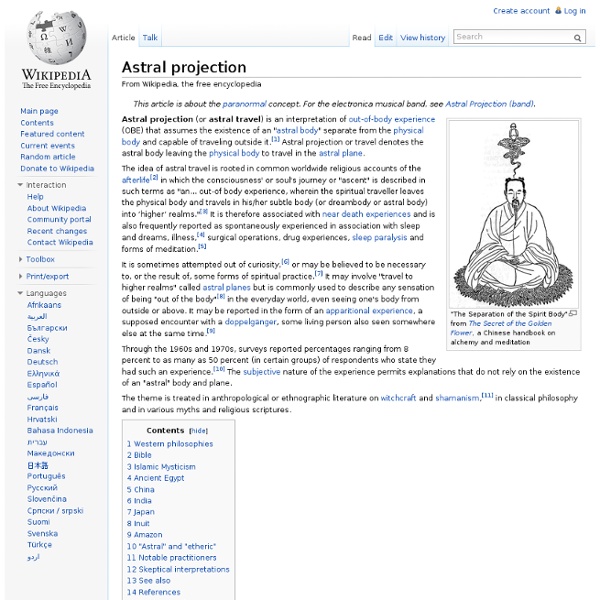 Near death experience Characteristics[edit] Researchers have identified the common elements that define near-death experiences.[24] Bruce Greyson argues that the general features of the experience include impressions of being outside one's physical body, visions of deceased relatives and religious figures, and transcendence of egotic and spatiotemporal boundaries.[25] Many different elements have been reported, though the exact elements tend to correspond with the cultural, philosophical, or religious beliefs of the person experiencing it: The traits of a classic NDE are as follows: The notice of unpleasant sound or noise (claimed by R. PeaceBody separationEntering darknessSeeing the lightEntering the light He stated that 60% experienced stage 1 (feelings of peace and contentment), but only 10% experienced stage 5 ("entering the light").[30] The distressing aspects of some NDEs are discussed more closely by Greyson and Bush.[33] Cultural variances[edit] NDE variants[edit] Three patterns of distressing NDEs.

As the Sun Awakens, NASA Keeps a Wary Eye on Space Weather As the Sun Awakens, NASA Keeps a Wary Eye on Space Weather June 4, 2010: Earth and space are about to come into contact in a way that's new to human history. To make preparations, authorities in Washington DC are holding a meeting: The Space Weather Enterprise Forum at the National Press Club on June 8th. Richard Fisher, head of NASA's Heliophysics Division, explains what it's all about: "The sun is waking up from a deep slumber, and in the next few years we expect to see much higher levels of solar activity. The National Academy of Sciences framed the problem two years ago in a landmark report entitled "Severe Space Weather Events—Societal and Economic Impacts." Much of the damage can be mitigated if managers know a storm is coming. "Space weather forecasting is still in its infancy, but we're making rapid progress," says Thomas Bogdan, director of NOAA's Space Weather Prediction Center in Boulder, Colorado. Bogdan sees the collaboration between NASA and NOAA as key. Author: Dr.

Blog de dictées Body Mass Index calculator you'll like Talking Moose Body Mass Index (BMI) can be used to indicate if you are overweight, obese, underweight or normal. It will, however, overestimate fatness in people who are muscular or atheletic. Because of these problems, this body mass index calculator shows extra statistics to help you be informed and judge your own body compared to others of the same height and age. Also offered are average weight and height charts and Body Mass Index charts, which show data you just can't find anywhere else. Women tend to believe they look their best at values between 20 to 22 and men are usually satisfied with a BMI of 23 to 25. If your BMI is between 23 and 25, you are not considered overweight by most people. Above all, Don't Worry, Be Happy.

Brain wave Functions Alpha  Beta Theta Brainwaves It is well known that the brain is an electrochemical organ; researchers have speculated that a fully functioning brain can generate as much as 10 watts of electrical power. Other more conservative investigators calculate that if all 10 billion interconnected nerve cells discharged at one time that a single electrode placed on the human scalp would record something like five millionths to 50 millionths of a volt. If you had enough scalps hooked up you might be able to light a flashlight bulb. Even though this electrical power is very limited, it does occur in very specific ways that are characteristic of the human brain. Electrical activity emanating from the brain is displayed in the form of brainwaves. There are four categories of these brainwaves, ranging from the most activity to the least activity. The next brainwave category in order of frequency is alpha. The next state, theta brainwaves, are typically of even greater amplitude and slower frequency.

Almost Untouched Nature - Waterfall Restaurant, Philippines Image credit Visiting this interesting Waterfall Restaurant located in San Pablo City, Philippines at the Villa Escudero Plantations and Resort can be a truly unique and memorable experience. Visitors can enjoy in lunch served on bamboo dining tables while the crystalline running water flows under their feet. Besides enjoying the authentic local cuisine, you can enjoy the almost untouched nature of the region formerly occupied by a farm and coconut plantations. If you need to spend calories after lunch then you have opportunity to do some sports activities like Bamboo rafts . Image credit Also, guests have the opportunity to watch the Philippine Experience Show where the country’s rich culture comes to life, from its ethnic diversity to its colonial legacy. Image credit Image credit If you are admirer of bird watching this is the place for you. Image credit Image credit …One more thing, if you planning your wedding, this can be perfect place for that special day. Source: 1, 2, 3, 4