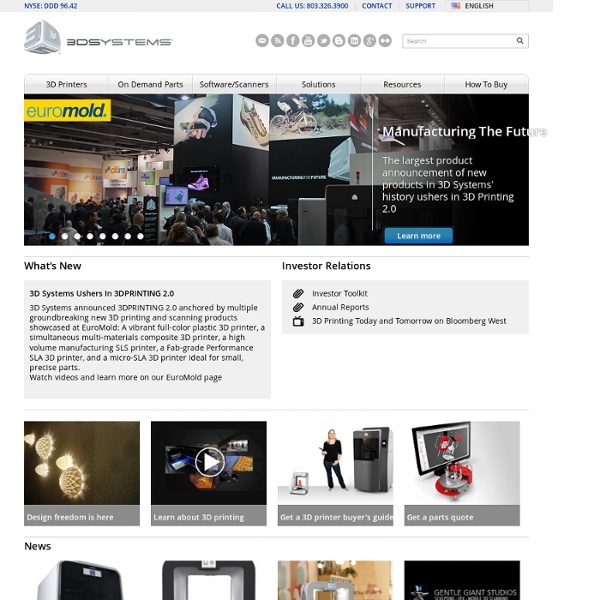 Form1 - Kickstarter Are you frustrated that low-end 3D printers don’t have the quality to make the true beauty of your designs real? Do you dream of having the power and resolution of a truly professional machine on your desktop? We’ve created an easy-to-use system that rivals the output of high-end printers at a fraction of the cost. Our reason for starting this project is simple: there are no low-cost 3D printers that meet the quality standards of the professional designer. Introducing the Kühling&Kühling RepRap Industrial We are excited to be able to finally publish first details on our new RepRap design after a full year of development. As we mentioned earlier we went the extra mile and started from scratch instead of modifying an existing design in order to incorporate all features we desired. This is a true RepRap. An open source 3D printer that can print its own components by Fused Filament Fabrication from materials like ABS plastic. Nearly all additional unprinted parts are either standard parts (steppers, nuts, bolts, washers etc.), flat sheet material that is cut into rectangular pieces and drilled (acrylic and wood for the case, aluminium composite board for bottom of print bed), or extrusions and shafts that are easily cut to length with a chop saw. For us it is very important to mention that we have incorporated a lot of good ideas from the great diversity of existing RepRaps into our design that we want to highlight as we’ll further document more details over the coming weeks.

Beehive Beehive has been using 3D printing to make eyewear for a long time. Now we want you to do it too. We’re developing an online interface for you to create glasses frames with some really simple tools. We mean really simple. Pocket laser engraver. For the Arduino I started out writing my own software. But while searching for a good way to control movement from the serial port I stumbled upon something called "Grbl ". This is a g-code interpreter with lots of nifty functions. As I already had everything connected to the Arduino I had to ether change my connections or change the software. Luckily it is easy to change control pins in the software.

3D Systems Sweetens Its Offering with New ChefJet™ 3D Printer Series ROCK HILL, South Carolina –January 7, 2014 – 3D Systems (NYSE:DDD) introduced today the ChefJet™ series of 3D printers, launching an entirely new, kitchen-ready 3D printer category for edibles. The first two printers in the series are the monochrome, countertop ChefJet 3D printer and the full-color, larger format ChefJet Pro 3D printer. Early feedback characterizes ChefJet as the must-have companion for the professional baker, cake master, and high-end event and restaurateur. Equipped with The Digital Cookbook, easy to use ChefJet software for the non-CAD user, the ChefJet printers enable stunning edible prints to be incorporated into any professional kitchen, effortlessly. The ChefJet series of printers will be showcased for the first time at the 2014 International CES in Las Vegas, NV, January 7-10, 2014, at the 3DS booth 31424, LVCC South Hall 3. The ChefJet Pro 3D printer is a full-color, large format printer with a build volume of 10x14x8”.

Form 1 - article TechCrunch The Form 1 3D printer, which you may recognize from Kickstarter, has topped $1.4 million in pre-orders in just under a week on the crowd-funding platform. With nearly 1,000 backers already, the FormLabs team has sold out of all their early-bird pledge packages, so anyone who backs the project now is only ahead of the official website sale shipments. Mad Kickstarter success always comes down to demand. Disrupt runner up gTar walked away with 3x its funding goal because it made learning the guitar fun and easy.

0120059504 Abstract A conveyor or other transport mechanism is provided to support multiple, sequential builds from a three-dimensional fabrication machine. The conveyor may be heated/cooled, coated, or otherwise treated to assist in adhesion during a build, as well as removal of objects after a build. Each fabricated object may be automatically removed from the conveyor as the conveyor moves in order to restore a buildable surface for fabrication of additional objects. Related U.S.

RepRapWiki TEDxEWB Talk: Adrian Bowyer at Imperial College, London, introduces RepRap RepRap is humanity's first general-purpose self-replicating manufacturing machine. RepRap takes the form of a free desktop 3D printer capable of printing plastic objects. Since many parts of RepRap are made from plastic and RepRap prints those parts, RepRap self-replicates by making a kit of itself - a kit that anyone can assemble given time and materials. It also means that - if you've got a RepRap - you can print lots of useful stuff, and you can print another RepRap for a friend... PCB CNC aus Metalab, dem offenen Zentrum für meta-disziplinäre Magier und technisch-kreative Enthusiasten. Introduction CNCs can facilitate in the creation of PCBS: Manual etching and then using CNC to drill automatically. Cutting out the board , to have round PCBs, or similar. Automated isolation routing: From a PCB some surface parts are milled away, so that the connection copper area are left isolated.

This 3D printer makes edible food - Jan. 24, 2011 An experimental 3D food printer "prints" frosting on a cupcake.By Laurie Segall, staff reporterJanuary 24, 2011: 10:11 AM ET NEW YORK (CNNMoney) -- A 3D food printer sounds like something out of Star Trek, but it's not out of this world. It's up and running at the French Culinary Institute in Manhattan -- and in five years, it could be in your home.

Mojo Discover the Magic of Mojo A 3D printer so brilliant, it could have designed itself. No need to leave your chair — Mojo prints professional-quality models at your desk. It’s as simple to use as a document printer, yet powered by Fused Deposition Modeling (FDM) Technology to build spot-on, functional concept models and rapid prototypes in ABSplus thermoplastic. 0120059503 Abstract A conveyor or other transport mechanism is provided to support multiple, sequential builds from a three-dimensional fabrication machine. The conveyor may be heated/cooled, coated, or otherwise treated to assist in adhesion during a build, as well as removal of objects after a build. Each fabricated object may be automatically removed from the conveyor as the conveyor moves in order to restore a buildable surface for fabrication of additional objects.

Wohlers Associates - Terry Wohlers Terry WohlersShort Biography Industry consultant, analyst, author, and speaker Terry Wohlers is president of Wohlers Associates, Inc., an independent consulting firm he founded 27 years ago. The company provides technical and strategic consulting on the new developments and trends in rapid product development, additive manufacturing, and 3D printing. Through this company, Wohlers has provided consulting assistance to more than 240 organizations in 24 countries. Also, he has provided advice to 150+ companies in the investment community, most being institutional investors that represent mutual funds, hedge funds, and private equity valued at billions of dollars.