GTA V Makes $800 Million In 24 Hours. It's Grand Theft Auto 5 day: Where did these fun lovin’ crims come from? Antique Code Show Grand Theft Auto 5 – one of the most keenly anticipated video games ever – was officially released today, although a few people apparently got their packages a few days ago. 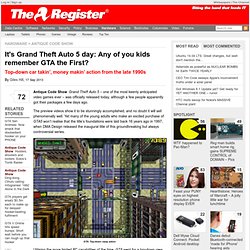 The preview videos show it to be stunningly accomplished, and no doubt it will sell phenomenally well. Yet many of the young adults who make an excited purchase of GTA5 won’t realise that the title’s foundations were laid back 16 years ago in 1997, when DMA Design released the inaugural title of this groundbreaking but always controversial series. GTA: Top-down racey action Utilising the more limited PC capabilities of the time, GTA went for a top-down view of the criminal action, with people and Matchbox-style cars represented as rotating bitmaps.

The impact of arcade originals such as Bally Midway’s Spy Hunter (1983) and Atari’s police-themed APB (1987) was obvious. Plenty of Grand Theft Auto gameplay staples were introduced. Steal a school bus if you dare Or how about added munitions? GTA V Proves a Lot of Parents Still Don't Know or Care About ESRB Ratings. Grand Theft Auto V: A crime- and sun-filled tourist destination. My first encounter with a prostitute came roughly 13 hours into Grand Theft Auto V. 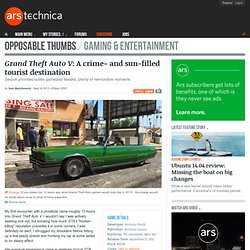 I wouldn't say I was actively seeking one out, but knowing how much GTA's "hooker-killing" reputation precedes it in some corners, I was definitely on alert. I shrugged my shoulders before hitting up a few seedy streets and honking my car at some ladies to no sleazy effect. Her eventual appearance came in relatively typical GTA fashion. I'd been hired to do some dirty work—in this case, to take out a fast-living tech magnate, one who normally hides behind a beefy security detail.

He had a soft spot for a particular woman, so I staked out the warehouse district until she rolled up in a drop-top pseudo-Caddy and hopped in his ride. My tires squealed, my machine gun popped, and before you knew it my mission was complete. But this scene was notably different because the escort I picked up wasn't the target—not of violence, not of derogatory language, and not of an exploitative, button-mashing sexcapade. GTA V - Graphics Study - Adrian Courrèges.

The Grand Theft Auto series has come a long way since the first opus came out back in 1997. About 2 years ago, Rockstar released GTA V. The game was an instant success, selling 11 million units over the first 24 hours and instantly smashing 7 world records. Having played it on PS3 I was quite impressed by the level of polish and the technical quality of the game.

Nothing kills immersion more than a loading screen: in GTA V you can play for hours, drive hundreds of kilometers into a huge open-world without a single interruption. Considering the heavy streaming of assets going on and the specs of the PS3 (256MB RAM and 256MB of video memory) I’m amazed the game doesn’t crash after 20 minutes, it’s a real technical prowess. Here I will be talking about the PC version in DirectX 11 mode, which eats up several GBs of memory from both the RAM and the GPU. So here is the frame we’ll examine: Michael, in front of his fancy Rapid GT, the beautiful city of Los Santos in the background. Shadows Water. Easter eggs evolved: Why gamers spent 3-years-plus studying GTAV’s Mount Chiliad. Just below the peak of Mount Chiliad, a huge mountain in the far north of San Andreas, a mysterious mural sits high atop a cliff face. 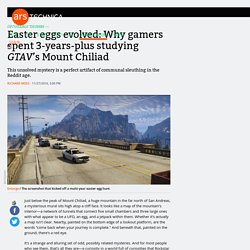 It looks like a map of the mountain's interior—a network of tunnels that connect five small chambers and three large ones with what appear to be a UFO, an egg, and a jetpack within them. Whether it's actually a map isn't clear. Nearby, painted on the bottom edge of a lookout platform, are the words "come back when your journey is complete. " And beneath that, painted on the ground, there's a red eye.

It's a strange and alluring set of odd, possibly related mysteries. But for a diehard group of mystery hunters, and for the hundreds of thousands of intrigued onlookers who keep tabs on their work, these phenomena hold the key to something big. This epic three-years-and-counting odyssey began with a shed. This triggered more wild speculation, primarily clustered in two threads—one on GTAForums, the other on the GTA V subreddit.