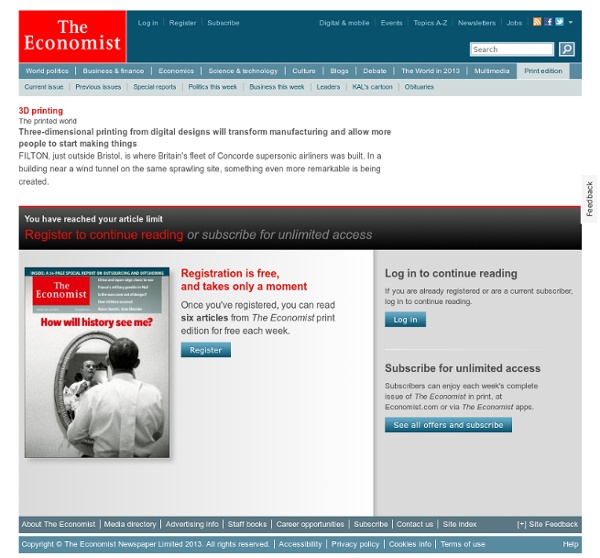 FILTON, just outside Bristol, is where Britain's fleet of Concorde supersonic airliners was built. In a building near a wind tunnel on the same sprawling site, something even more remarkable is being created. Little by little a machine is “printing” a complex titanium landing-gear bracket, about the size of a shoe, which normally would have to be laboriously hewn from a solid block of metal. Brackets are only the beginning. The researchers at Filton have a much bigger ambition: to print the entire wing of an airliner. Far-fetched as this may seem, many other people are using three-dimensional printing technology to create similarly remarkable things.

3D Printing and the end of ownership - my plastic future There is a lot of discussion online regarding the possible (inevitable?) copyright/intellectual property/patent/legal fights around personal 3D printing. However, I’ve yet to see anything about a different fight that I have experienced several times now, so I figured I’d write about it and see what others think.

REPLICATOR — Putting the "Custom" Back In Customer Gifs have become a fixture of the web, transformed Buzzfeed into a major media entity, and brought countless millions of hours of joy to bored office drones the world over. There’s a gif search engine and a service that will turn these little moments of web zen into IRL animated pictures. So why aren’t these miniature animations used more widely for practical purposes? Do any ecommerce sites use animated gifs to show off the unique features of a product? How about replacing turgid instructional guides with gif-tastic help pages? Animated images are a perfect midpoint between static images and full on video content, but are rarely used for productive purposes, with a few exceptions.

IBM invents ’3D nanoprinter’ for microscopic objects Illustration: a hot tip triggers local decomposition and evaporation of chip substrate material to etch patterns (credit: Advanced Materials) IBM scientists have invented a tiny “chisel” with a nano-sized heatable silicon tip that creates patterns and structures on a microscopic scale. The tip, similar to the kind used in atomic force microscopes, is attached to a bendable cantilever that scans the surface of the substrate material with the accuracy of one nanometer. Unlike conventional 3D printers, by applying heat and force, the nanosized tip can remove (rather than add) material based on predefined patterns, thus operating like a “nanomilling” machine with ultra-high precision. IBM scientists have invented a tiny “chisel” with a heatable silicon tip 100,000 times smaller than a sharpened pencil point.

Kurzweil Warns Retailers at Shop.org to Plan for Major Paradigm Shifts Attendees of this year's Shop.org Summit were treated to a talk by inventor, author and futurist Ray Kurzweil, who said the exponential growth in IT/computing power means the world will be very different in 3 years. He warned retailers to make sure they build change into their plans and business models. "There are major paradigm shifts taking place in 3 years - every sector of society is being transformed, and retail cuts across everything we do," he said. He cited a development that could have a significant impact on retailers and on shipping carriers.

3D Printing Feed a device with blueprints for a solid object of your choosing, then let the machine build it for you from plastic or other simple materials [1] Video illustration at "3D Printing” is an umbrella term that covers four distinct manufacturing technologies. All are “Additive Fabrication” processes that create objects by adding material in thin layers until a product is completed. Each technology addresses the challenge differently with accompanying benefits and drawbacks markus kayser: solar sinter 3D printer jun 28, 2011 markus kayser: solar sinter 3D printer ‘solar sinter’, a solar-powered 3D printer by markus kayser, utilizes the abundant desert resources of sun and sand to manufacture products london-based markus kayser, a masters candidate in design products at the royal college of art, converts the raw resources of sunlight and sand into glass products with his fully automated, solar-powered ‘solar sinter‘ 3D printer. the device works from the same technique of sintering that is common to most 3D printer processes, heating a powder (here silicia sand) to its melting point and letting it cool and solidify (here into glass). ‘solar sinter’ utilizes the sun’s rays in place of a laser to selectively heat parts of the sand.

Who will get the biggest slice of 3D-printed pie? MakerBot's Bre Pettis says his 3D printers are for everyone. 3D Systems' Cathy Lewis begs to differ. Each spokesperson made a strong pitch during our 3D printing roundtable at this year's Consumer Electronic Show. Who's right? 3D Systems: Old guard expertise 3D Systems announced its Cube 3D printer at CES this year, but the company has been involved with additive manufacturing and rapid prototyping since 1986. Enterprise Resilience Management Blog: 3D Printing and the Supply Chain The editorial staff at Supply Chain Digest asks an interesting question: "How Soon will 'Printed' Parts Revolutionize Supply Chains - and the World?" [22 February 2011] I first posted a blog that mentioned 3D printers back in November 2006. I discussed the subject at more length the next year in a post entitled Where is My Replicator? At that time, 3D printers were still pretty much an expensive novelty item.

Explainer: What Is 4D Printing? Additive manufacturing – or 3D printing – is 30 years old this year. Today, it’s found not just in industry but in households, as the price of 3D printers has fallen below US$1,000. Knowing you can print almost anything, not just marks on paper, opens up unlimited opportunities for us to manufacture toys, household appliances and tools in our living rooms. Why 3-D Printing Will Go the Way of Virtual Reality Update: Tim Maly has published an excellent counterpoint to this post over at the Tech Review Guest blog. There is a species of magical thinking practiced by geeks whose experience is computers and electronics—realms of infinite possibility that are purposely constrained from the messiness of the physical world—that is typical of Singularitarianism, mid-90s missives about the promise of virtual reality, and now, 3-D printing. As 3-D printers come within reach of the hobbyist—$1,100 for MakerBot’s Thing-O-Matic—and The Pirate Bay declares “physibles” the next frontier of piracy, I’m seeing usually level-headed thinkers like Clive Thompson and Tim Maly declare that the end of shipping is here and we should all start boning up on Cory Doctorow’s science fiction fantasies of a world in which any object can be rapidly synthesized with a little bit of energy and raw materials. Let’s start with the mechanism. Most 3-D printers lay down thin layers of extruded plastic.

3D printing provides a vision of manufacturing's future (w/ video) Dan Mishek, co-owner and head of VistaTek, with a prototype bust of Walt Disney. It was made using 3D printing technology at Mishek's company in Vadnais Heights. (Pioneer Press: Richard Marshall) Dan Mishek and his siblings operate VistaTek, a small manufacturing concern in Vadnais Heights started by his parents 15 years ago. Continuous liquid interface production of 3D objects Additive manufacturing processes such as 3D printing use time-consuming, stepwise layer-by-layer approaches to object fabrication. We demonstrate the continuous generation of monolithic polymeric parts up to tens of centimeters in size with feature resolution below 100 micrometers. Continuous liquid interface production is achieved with an oxygen-permeable window below the ultraviolet image projection plane, which creates a “dead zone” (persistent liquid interface) where photopolymerization is inhibited between the window and the polymerizing part. We delineate critical control parameters and show that complex solid parts can be drawn out of the resin at rates of hundreds of millimeters per hour. These print speeds allow parts to be produced in minutes instead of hours. Although three-dimensional (3D) printing is now possible using relatively small and low-cost machines, it is still a fairly slow process.

Legal battles loom as home 3D printing grows The controversial website The Pirate Bay announced this week that it would begin hosting digital files for visitors to download and print out on their 3D printers. The site has coined a new word - "Physibles" - for data objects capable and feasible of becoming physical. "We believe that things like three-dimensional printers, scanners and such are just the first," the group wrote on its website. "We believe that in the nearby future you will print your spare parts for your vehicles." The site has faced extensive legal battles in its home country of Sweden over potential intellectual property infringement of digital content.

The Pirate's Dilemma Here you can download an electronic copy of the book. The price is entirely up to you. To download, simply click on the link above or the book cover pictured on the left. You’ll be taken to a checkout page where you can set the price anywhere from $0.00 upwards. You’ll need to enter your email address, but I respect your online privacy and promise never to spam you. Why would an author give away a book for free?