Vita. Occipital makes the Structure Sensor and 360 Panorama. Intercept the Distractions. BleepBleeps Store. Heartbeat from Home. The World's First Personal Robot. Hardware Battlefield 2015. KEEO Official Pre-Order Store. BeON - A New Layer of Home Security. Stethee : Listen, See & Feel a heartbeat in your hand. Stethee - Wireless stethoscope for everyone. Studio Cheha. Andromium - Next Generation Computing. Breathometer - The World's First Smartphone Breathalyzer. We create music technology that lets anyone make music. Product Introduction: Habitat: A Home Automation Platform that Only Requires Sensor Mounting. Touted as "home automation for products you already own," Habitat is a Kickstarter-funded home automation platform built on the philosophy that installation should only be as difficult as mounting a battery-powered sensor on a wall. 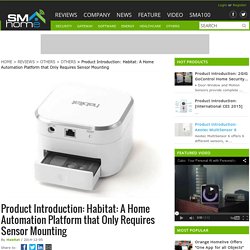 The Air Dock. The Wireless Smart Button. Cubic. Block out the world. Hear what you need. Everykey - No more Keys. No more Passwords. Foaster - a toaster for your phones (and tablets!). Homepage - Eva Smart Shower. MAID Oven - Make All Incredible Dishes. UpCart is up for Anything! Stair climbing folding hand cart. BottleLoft – STRONG LIKE BULL Magnets. Ubi -The Voice Of The Internet. Your movement is your power. Kuna. Filmbo - Your Own iOS Cameraman. Bluesmart. SmartMat Special Offer. The bttn - the simplest user interface in the world. Darma.co. OpenHome. Wearable technology that gives you control over your world in fun and engaging ways. AR-1. HDR Time Lapse Camera - TLC200 Pro. Time Lapse Video 1, 2, 3 ! 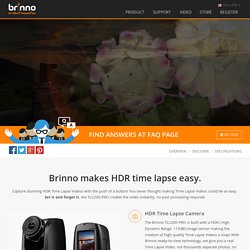 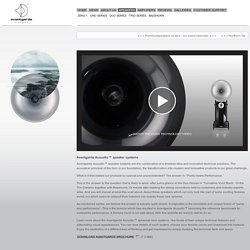 The acoustical principal of the horn is our foundation, the transformation into modern and innovative products is our great challenge. What is it that makes our products so special and unprecedented? The answer is: “Purity meets Performance.“ This is the answer to the question that is likely to arise, after just a glance at the Duo Grosso in “Turmaline Vivid Black“. As mentioned earlier, we believe the answer is actually quite simple. Learn more about the Avantgarde Acoustic™ spherical horn systems - the facets of their unique technical features and astounding visual appearances. 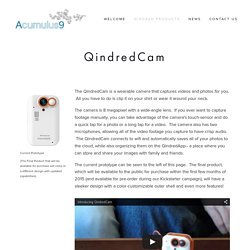 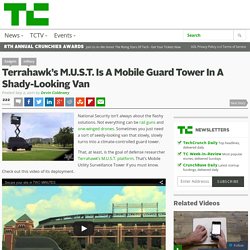 Not everything can be rail guns and one-winged drones. Sometimes you just need a sort of seedy-looking van that slowly, slowly turns into a climate-controlled guard tower. That, at least, is the goal of defense researcher Terrahawk’s M.U.S.T. platform. That’s Mobile Utility Surveillance Tower if you must know. Check out this video of its deployment. I have to say, it’s different in the movies and such where these things tend to exist. Networking, iPhone, iPad, Samsung and Kindle Accessories. ロボットポータル-ロボナブル-川崎重工、重量物の持ち運び補助できる装着型ロボット開発. Video: Kawasaki’s Power-Assist Robot Suit Helps Humans Lift Heavy Objects. Japanese tech powerhouse Kawasaki is working on the so-called Power Assist Suit, a wearable robot that helps humans carry objects weighing 30-40kg without any effort from the muscles. 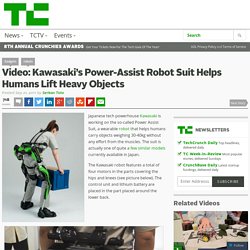 The suit is actually one of quite a few similar models currently available in Japan. The Kawasaki robot features a total of four motors in the parts covering the hips and knees (see picture below). The control unit and lithium battery are placed in the part placed around the lower back. According to Kawasaki, the self-supporting robot is designed in a way that wearers don’t feel the weight of the suit itself when moving around.

The Power Assist Suit can be adjusted to the length of the wearer’s legs and doesn’t take more than a minute to put on and off, Kawasaki promises. The company wants to commercialize the robot after testing it out in its own factories for one to two years. Dropcam - Super Simple Video Monitoring and Security. Somfy’s TaHomA Lets You Control The House From Your iPad. I’m not a homeowner myself, but something tells me that when I do buy a house, I’m going to want something like the TaHomA home automation system to ensure that I can be as lazy as possible. 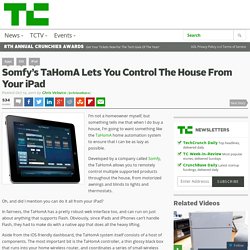 Developed by a company called Somfy, the TaHomA allows you to remotely control multiple supported products throughout the house, from motorized awnings and blinds to lights and thermostats. Oh, and did I mention you can do it all from your iPad? In fairness, the TaHomA has a pretty robust web interface too, and can run on just about anything that supports Flash. Obviously, since iPads and iPhones can’t handle Flash, they had to make do with a native app that does all the heavy lifting.

Aside from the iOS-friendly dashboard, the TaHomA system itself consists of a host of components. Once all the pieces are in place, you’re ready to fire up the dashboard. TaHomA Home Automation System - Affordable Home Control by Somfy. Motors & automatic control solutions... - Somfy. OKAYA ELECTRONICS CORP. SANDEN - Automotive, Vending, Retail, Living & Environment Systems.

Video: Japan Gets Vending Machine 2.0 With See-Through Full HD Display, Facial Recognition. There can be no doubt that Japan is the country of vending machines, and this newest model is perhaps the most advanced yet. 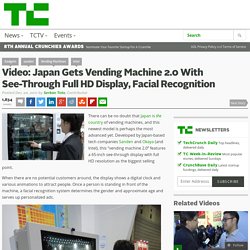 Developed by Japan-based tech companies Sanden and Okaya (and Intel), this “vending machine 2.0″ features a 65-inch see-through display with full HD resolution as the biggest selling point. When there are no potential customers around, the display shows a digital clock and various animations to attract people. Once a person is standing in front of the machine, a facial recognition system determines the gender and approximate age and serves up personalized ads.

Maker Sanden says the machine’s display can produce text, pictures or animations in HD quality. The company commands a 30% global market share for vending machines and is also active in the US, meaning this prototype could also make its way over to North America one day. This video, provided by Diginfo TV, shows how the vending machine works (in English): ASAHI GROUP HOLDINGS. Asahi Beer (China) Investment Co., Ltd. 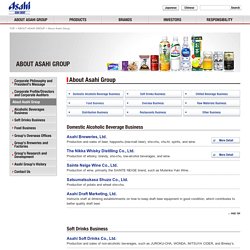 Sales of ASAHI SUPER DRY Beer, and Asahi Group Products in China. Invest in Yantai Beer Tsingtao Asahi Co., Ltd. and Shenzhen Tsingtao Beer Asahi Co., Ltd. Yantai Beer Tsingtao Asahi Co., Ltd. Japan Gets Wi-Fi Dispensing Vending Machines. It’s no secret that Japan is the country of vending machines (they even have models like this one now), but this is new: Tokyo-based beverage company Asahi Soft Drinks took the wraps off a vending machine [JP] that not only offers drinks but also sends out Wi-Fi signals within a 50m radius. 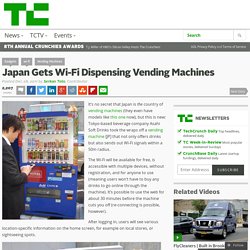 The Wi-Fi will be available for free, is accessible with multiple devices, without registration, and for anyone to use (meaning users won’t have to buy any drinks to go online through the machine). It’s possible to use the web for about 30 minutes before the machine cuts you off (re-connecting is possible, however).

After logging in, users will see various location-specific information on the home screen, for example on local stores, or sightseeing spots. Starting in 2012, Asahi will set up 1,000 of the vending machines in five different regions in Japan (Tokyo, Sendai, Chubu, Kinki, and Fukuoka) in the first year. The plan is to roll out a total of 10,000 units in the next five years. Koubachi - Interactive Plant Care. Clover. Matterport 3D Models of Real Interior Spaces. Home - ecoATM. Bulavkus USB flash drive.

AdverCar, a startup promising to make it easy for drivers to turn their vehicles into rolling advertisements, has raised a $2 million seed round. The funding was led by Canaan Partners, with participation from 1-800-Flowers, Branford Castle Private Equity, New Orleans Startup Fund, Jit Saxena, and the TiE Angels Boston. 1-800-FLOWERS CEO Jim McCann and Canaan partner Deepak Kamra are joining adverCar’s board of directors. Founder and CEO Neil Turner said there are other companies offering to wrap cars in advertising, but only adverCar has a solution that’s easy and affordable for advertisers.

Wrapping a car in ads costs thousands of dollars, whereas adverCar mounts its ads as easily removable stickers that are the same size as standard ad units, and it charges around $280 for a monthlong campaign. That’s the same price as advertising on a cab, Turner said. AdverCar. E La Carte Releases More Powerful Version Of Customized Tablet For Restaurants. E la Carte, a company that develops a tableside tablet for the restaurant and related hospitality industries, is debuting a brand new version of its hardware for restaurants. As we’ve written in the past, E la Carte launched Presto earlier this year to bring user-friendly tablets to restaurants to bring efficiency to the tableside and ordering experience.

The 7-inch tablet includes a digital menu that lets you sift through the restaurant’s food and drink selection via photos and detailed descriptions using a touch-screen interface. Elacarte.com. Wi-Fi for Everything. Spark: Upgrade your lights with Wi-Fi and apps by Spark Devices. MIDI Guitar Controller. Revolve Robotics. Olive - ONE. LAZY-HANDS. HAPI.com : Enjoy Your Food with HAPIfork by Jacques L&eacute;pine. Eating too fast leads to poor digestion and poor weight control. Home - ecoATM. Outex Store.