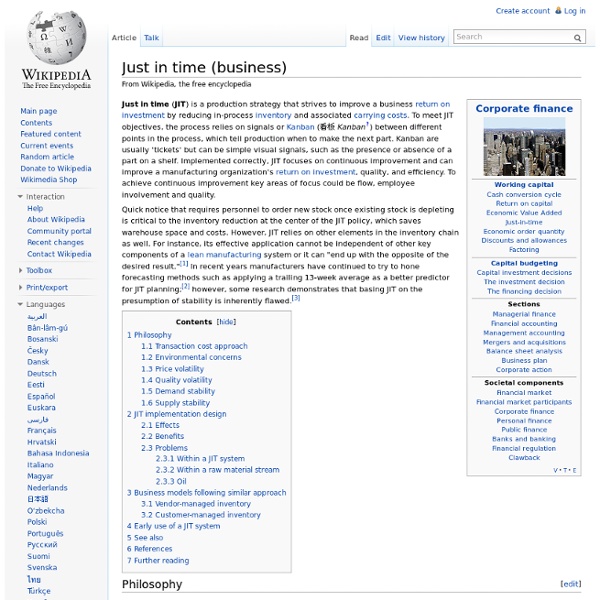 Just in time (JIT) is a production strategy that strives to improve a business' return on investment by reducing in-process inventory and associated carrying costs. To meet JIT objectives, the process relies on signals or Kanban (看板?, Kanban) between different points, which are involved in the process, which tell production when to make the next part. Kanban are usually 'tickets' but can be simple visual signals, such as the presence or absence of a part on a shelf. JIT relies on other elements in the inventory chain as well. The philosophy of JIT is simple: the storage of unused inventory is a waste of resources. Inventory is seen as incurring costs, or waste, instead of adding and storing value, contrary to traditional accounting. In short, the Just-in-Time inventory system focus is having “the right material, at the right time, at the right place, and in the exact amount”, without the safety net of inventory. JIT helps in keeping inventory to minimum in a firm. Reduced setup time.

Wikipedia Production leveling On a production line, as in any process,[2] fluctuations in performance increase waste. This is because equipment, workers, inventory and all other elements required for production must always be prepared for peak production. This is a cost of flexibility. If a later process varies its withdrawal of parts in terms of timing and quality, the range of these fluctuations will increase as they move up the line towards the earlier processes. This is known as demand amplification. Where demand is constant, production leveling is easy, but where customer demand fluctuates, two approaches have been adopted: 1) demand leveling and 2) production leveling through flexible production. To prevent fluctuations in production, even in outside affiliates, it is important to minimize fluctuation in the final assembly line. Production Leveling by volume or by product type or mix[edit] Leveling by volume[edit] Leveling by product[edit] Implementation[edit] Demand leveling[edit] Implementation[edit] See also[edit]

LibriVox 8 Dimensions of Quality | Lean Six Sigma Academy By Chris Akins of Trident-Consulting LLC The definition of quality is often a hotly debated topic. While it may seem intuitive, when we get right down to it, “quality” is a difficult concept to define with any precision. The most fundamental definition of a quality product is one that meets the expectations of the customer. In order to develop a more complete definition of quality, we must consider some of the key dimensions of a quality product or service. Dimension 1: Performance Does the product or service do what it is supposed to do, within its defined tolerances? Performance is often a source of contention between customers and suppliers, particularly when deliverables are not adequately defined within specifications. The performance of a product often influences profitability or reputation of the end-user. Dimension 2: Features Does the product or services possess all of the features specified, or required for its intended purpose? Dimension 3: Reliability Dimension 4: Conformance Summary

Internet Anagram Server / I, Rearrangement Serv... In News:The New York TimesSydney Morning HeraldThe Globe and MailJerusalem Post Did you know that parliament is an anagram of partial men? Or, Clint Eastwood an anagram of Old West Action? Someone once said, "All the life's wisdom can be found in anagrams. Anagrams never lie." Total quality management Total quality management (TQM) consists of organization-wide efforts to install and make permanent a climate in which an organization continuously improves its ability to deliver high-quality products and services to customers. While there is no widely agreed-upon approach, TQM efforts typically draw heavily on the previously-developed tools and techniques of quality control. TQM enjoyed widespread attention during the late 1980s and early 1990s before being overshadowed by ISO 9000, Lean manufacturing, and Six Sigma. History[edit] In the late 1970s and early 1980s, the developed countries of North America and Western Europe suffered economically in the face of stiff competition from Japan's ability to produce high-quality goods at competitive cost. Development in the United States[edit] From the Navy, TQM spread throughout the US Federal Government, resulting in the following: Features[edit] The key concepts in the TQM effort undertaken by the Navy in the 1980s include:[11] Joseph M. [edit]

IE NetRenderer - Browser Compatibility Check - Muda (Japanese term) One of the key steps in Lean and TPS is the identification of which steps add value and which do not. By classifying all the process activities into these two categories it is then possible to start actions for improving the former and eliminating the latter. Some of these definitions may seem rather 'idealist' but this tough definition is seen as important to the effectiveness of this key step. The expression "Learning to see" comes from an ever developing ability to see waste where it was not perceived before. There can be more forms of waste in addition to the seven. The Eight Wastes - DOWNTIME[5] Each time a product is moved it stands the risk of being damaged, lost, delayed, etc. as well as being a cost for no added value. Inventory, be it in the form of raw materials, work-in-progress (WIP), or finished goods, represents a capital outlay that has not yet produced an income either by the producer or for the consumer. An easy way to remember the 7 wastes is TIMWOOD.