Under the Hood V

Under the Hood VI

Africa Will Have Just One Low Income Country By 2050. AFRICANGLOBE – A new report launched in Addis Ababa has indicated that large infrastructure gaps, climate change, high speed of urbanization, and a youthful and rapidly growing population will influence the future pace of growth in Africa. 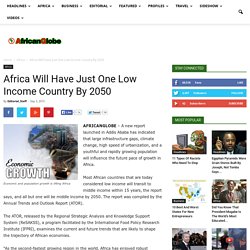 Most African countries that are today considered low income will transit to middle income within 15 years, the report says, and all but one will be middle income by 2050. The report was compiled by the Annual Trends and Outlook Report (ATOR). The ATOR, released by the Regional Strategic Analysis and Knowledge Support System (ReSAKSS), a program facilitated by the International Food Policy Research Institute (IFPRI), examines the current and future trends that are likely to shape the trajectory of African economies.

African markets for investment. Africa is not a single investment destination with a single set of standardised risk factors and homogenous potential for reward. Although some high-level similarities are evident, digging into the specifics of certain regions and countries show that Africa is comprised of a range of distinct investment destinations; each with its own attractions, challenges, cultural differences and business practices. Parts Of Southern Africa Are Within Tantalising Reach Of Eliminating Malaria. There has been a concerted international effort since the early 2000s to tackle malaria. 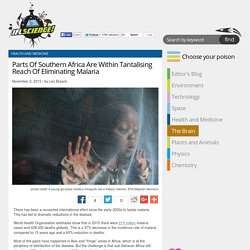 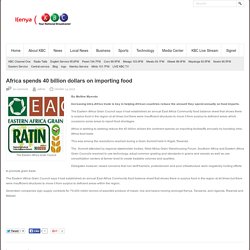 ‘90% of Income in Africa Used to Fund Imports’, Articles. A ship berthed at a port John Iwori Maritime experts have said ports in African countries are designed mostly for imports rather than export, noting that not less than 90 per cent of the income accruing into the African continent is used to fund import. 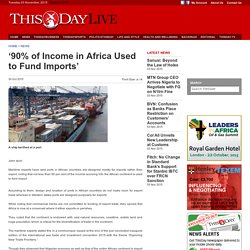 According to them, design and location of ports in African countries do not make room for export trade whereas in Western states ports are designed purposely for exports. While noting that commercial banks are not committed to funding of export trade, they opined that Africa is now at a crossroad where it either exports or perishes. They noted that the continent is endowed with vast natural resources, coastline, arable land and huge population which is critical for the diversification of trade in the continent. Africa: Despite Threats, Africa Is Looking to Nuclear With Russia and China's Help - allAfrica.com. AnalysisBy Scott Firsing, Monash University Many African countries are in the grip of a nuclear fad. 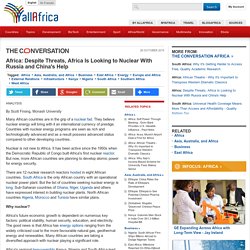 They believe nuclear energy will bring with it an international currency of prestige. Countries with nuclear energy programs are seen as rich and technologically advanced and as a result possess advanced status compared to other developing countries. Nuclear is not new to Africa. Mall the merrier: Africa's appetite for shopping. Africa: Sub-Saharan Africa in U.S.$23.4 Billion Worth of M&A Deals - allAfrica.com. The value of announced merger & acquisition (M&A) transactions with any Sub-Saharan African involvement reached $23.4bn during the first nine months of 2015, up 12% from the value registered during the same period in 2014. 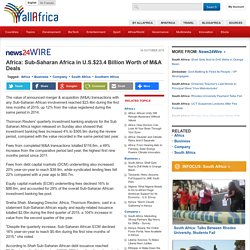 Thomson Reuters' quarterly investment banking analysis for the Sub Saharan Africa region released on Sunday also showed that investment banking fees increased 4% to $305.9m during the review period, compared with the value recorded in the same period last year. Africa: Economic Slowdown Prompts Scrutiny of African Data - allAfrica.com. By Reuters A dip in the fortunes of many African economies has raised doubts about the accuracy of the heady statistics that lured hordes of investors during the "Africa Rising" boom years. 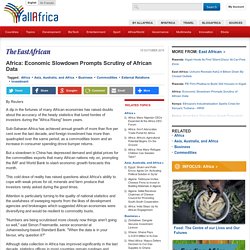 Sub-Saharan Africa has achieved annual growth of more than five per cent over the last decade, and foreign investment has more than quadrupled over the same period, as a commodities boom and an increase in consumer spending drove bumper returns. But a slowdown in China has depressed demand and global prices for the commodities exports that many African nations rely on, prompting the IMF and World Bank to slash economic growth forecasts this month. Africa’s Top 100 most admired and most valuable brands. Brand Africa is to release its highly anticipated fourth Brand Africa 100, which is Africa’s best brand-rankings of the Top 100 most admired and most valuable brands in Africa at a gala event at the Sandton Convention Centre on October 22. 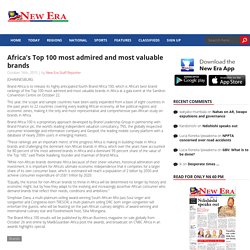 This year, the scope and sample countries have been vastly expanded from a base of eight countries in the past years to 22 countries covering every leading African economy, all five political regions and economic zones, making it the only and most representative and comprehensive pan-African study on brands in Africa. Brand Africa 100 is a proprietary approach developed by Brand Leadership Group in partnership with Brand Finance plc, the world’s leading independent valuation consultancy, TNS, the globally respected consumer knowledge and information company and Geopoll, the leading mobile survey platform with a database of nearly 200m users in emerging markets. 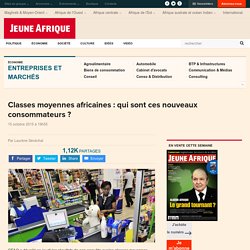 The next 5 years could change Africa forever; and these events might sink or raise it to the skies. OVER the next five years, two of the elite club of Africa’s longest-serving leaders will either fall off their thrones or step down. 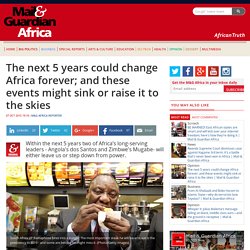 Angola’s Jose Eduardo dos Santos, 73, has been in power for 36 years – just over a month shy of the record holder, Equatorial Guinea’s Teodoro Obiang Nguema Mbasogo, who has also been in office since 1979. Recently, the ailing dos Santos hinted that he might, finally, step down when his current term ends in 2017. (READ: It’s not wise for me to step down now, Angola’s long-serving president Dos Santos says, but signals change). The other is Zimbabwe’s 91-year-old Robert Mugabe. In power for 35 years,Mugabe has taken a country with among the hightest literacy rates on the continent, and once had one of its most advanced agriculture sectors, so much that some dubbed it the “California of Africa”, and run it to the ground. The new 'arms' race? These 5 countries are vying to be Africa's first green ‘superpower’ and the winner is... US President Barack Obama Monday unveiled a final set of rules to cut greenhouse gas emissions in a big initiative which would form a major plank of his legacy as he winds down his term in office.

In what has been termed the strongest action ever taken in the United States to combat climate change, the rules will see the country’s hundreds of coal-fired—and polluting—power plants gradually shift towards cleaner energy sources such as natural gas, and significantly, renewables. The change adds to the global push towards using more clean energy in an attempt to limit global temperatures to two degrees above pre-industrial levels to head off the worst effects of climate change, which include food and water shortages and unpredictable and more intense floods and droughts. Sub-Saharan Africa growth to slow to 3.7% in 2015, says World Bank.

SUB-SAHARAN Africa’s economic growth will likely decelerate from 4.6% last year to 3.7% this year, its lowest level since 2009, the World Bank says The World Bank released its biannual Africa Pulse report on Monday, which looks into the economic outlook for the region. African growth opportunity is a tweet away. The African business landscape is evolving at a rapid pace.