Antistatic agent. An antistatic agent is a compound used for treatment of materials or their surfaces in order to reduce or eliminate buildup of static electricity generally caused by the triboelectric effect. 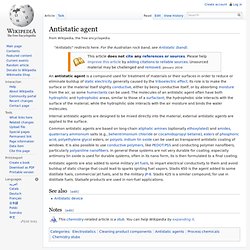 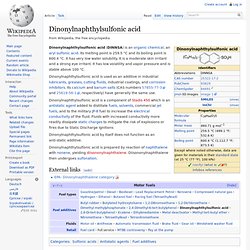 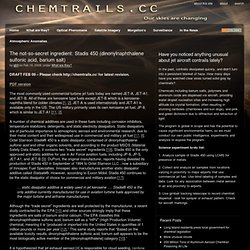 PDF version The most commonly used commercial turbine jet fuels today are named JET-A, JET-A1, and JET-B. All of these are kerosene type fuels except JET-B which is a kerosene-naphtha blend for colder climates [1, 2]. JET-A is used internationally and JET-A1 is available only in the US. Stadis® 450 - Innospec - Static Dissipator Additives. Enhance safety by preventing static charge build up Safety must always be the number one priority when refining or handling fuels. 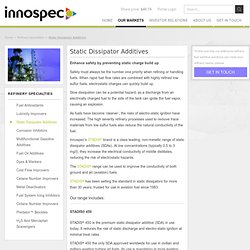 When rapid fuel flow rates are combined with highly refined low sulfur fuels, electrostatic charges can quickly build up. Slow dissipation can be a potential hazard, as a discharge from an electrically charged fuel to the side of the tank can ignite the fuel vapor, causing an explosion. As fuels have become ‘cleaner’, the risks of electro-static ignition have increased. The high severity refinery processes used to remove trace materials from low sulfur fuels also reduce the natural conductivity of the fuel.

Innospec’s STADIS® brand is a class leading, non-metallic range of static dissipator additives (SDAs). The STADIS® range can be used to improve the conductivity of both ground and jet (aviation) fuels. STADIS® has been setting the standard in static dissipators for more than 30 years; trusted for use in aviation fuel since 1983. Our range includes: Stadis® 450 MSDS.