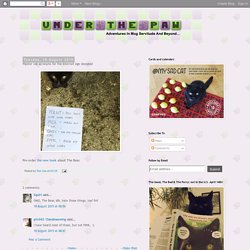 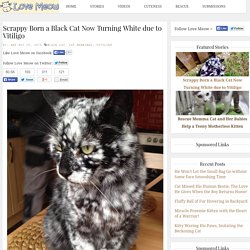 This 17 year old cat has some extraordinary markings. He is now a black and white cat but when he was born he was completely black. According to Scrappy’s Facebook page: “Scrappy was born in 1997 as a black cat and only a few years ago he started turning white (maybe vitiligo) and has ended up with this extraordinary pattern.” [Scroll down for video] Scrappy is perfectly healthy for his age. Vitiligo is extremely rare in cats. At 17 years old, Scrappy is a healthy and happy cat. Vitiligo is very rare in cats. When it happens, it is most easily seen on black cats. Rolling on his back, ready for a belly rub! Scrappy developed a patch of white fur when he was 7 years old. Now he looks absolutely stunning with his camouflage markings! 21 Reasons We Can't Help But Love Our Cats — Even When They're Jerks.

Cats With WTF Faces - What Am I Eating? Does Your Cat Love You? 6 Ways To Tell. With sloppy kisses and swishing tails, it’s hard not to notice how much dogs love their owners, as if their only purpose is to love, love, love you and sometimes eat. 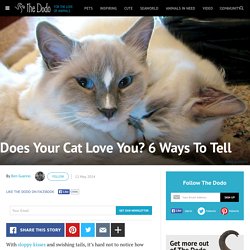 That’s because we’ve been breeding dogs for tens of thousands of years, selecting the cutest and waggiest pooches for pets. Young pups even respond to human gestures. It’s no wonder that cats, by comparison, sometimes come across as aloof and distant or spitting fur balls of fury. But that doesn’t mean that it’s impossible to decode your cat -- we simply need to “use cat rules, not human rules” of attachment, says Carlos Siracusa, a veterinarian and cat behavior expert at the University of Pennsylvania. Here are six signs your cat just might actually love you: The 100 Most Important Cat Pictures Of All Time. Watch: Bear so scared it falls off porch after cat confrontation. Fun Galleries. We’ve all seen plenty of traditional sailor tattoos with the words “be mine” inked underneath, but when you combine this with a cute kitten wearing a sailor outfit, you’ve got yourself one super special tattoo! 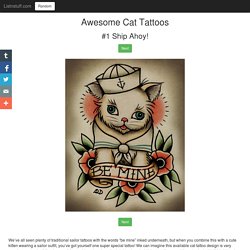 We can imagine this available cat tattoo design is very popular among the feline-lovers of the world, and we love the bright colors, bold black outlines, and the retro feel of it. If this kitten is asking us to ‘be his’, then we certainly don’t have a problem with that - Just how could anyone say no to such a sweet thing, especially with those big blue eyes?!

It's interesting to see how far the traditional sailor tattoo has come. 32 Cats Recreate Photos From Their Kittenhood. 13 Cats Who Can't Believe You're Taking A Picture Instead Of Helping. 13 Cats Who Would Rather Enjoy The Sun Indoors, Thank You Very Much. The Cat that was Shot for Treason. A cat was shot for treason In World War One It had acted as an intermediary Between Allied and Axis lines: English and German soldiers Could send messages To each other By tying scraps of paper To the cat’s collar. 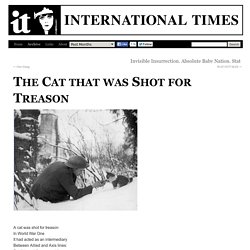 The cat then ran across No Man’s Land, From one trench to the other. When the War Office found out, Allied superior officers Ordered that the cat, nicknamed Felix, Should be shot for its being a go-between, And thus enabling fraternization Between the warring troops On the Western Front. 26 Feelings All Cat Owners Can Relate To.