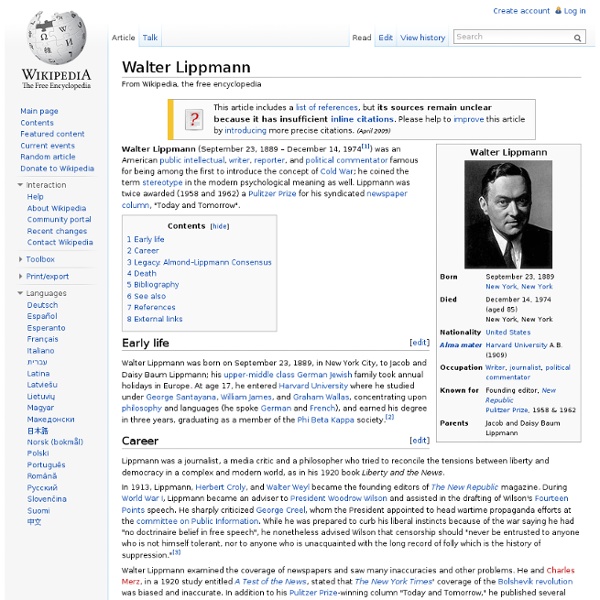 Early life[edit] Career[edit] Lippmann was a journalist, a media critic and an amateur philosopher who tried to reconcile the tensions between liberty and democracy in a complex and modern world, as in his 1920 book Liberty and the News. In 1913, Lippmann, Herbert Croly, and Walter Weyl became the founding editors of The New Republic magazine. During World War I, Lippmann was commissioned a captain in the Army on June 28, 1918 and was assigned to the intelligence section of the AEF headquarters in France. Through his connection to Colonel House, he became an adviser to President Woodrow Wilson and assisted in the drafting of Wilson's Fourteen Points speech. Walter Lippmann in 1914 It was Lippmann who first identified the tendency of journalists to generalize about other people based on fixed ideas. Though a journalist himself, he did not assume that news and truth are synonymous. The basic problem of democracy, he wrote, was the accuracy of news and protection of sources. Death[edit]

William Walker (filibuster) Walker was born in Nashville, Tennessee, in 1824 to James Walker and his wife Mary Norvell. His father was a son of a Scottish immigrant. His mother was a daughter of Lipscomb Norvell, an American Revolutionary War officer from Virginia. One of Walker's maternal uncles was John Norvell, a US Senator from Michigan and founder of the Philadelphia Inquirer.[1] William Walker graduated summa cum laude from the University of Nashville at the age of fourteen. At the age of 19, he received a medical degree from the University of Pennsylvania and practiced briefly in Philadelphia before moving to New Orleans to study law.[2] In the summer of 1853, Walker traveled to Guaymas, seeking a grant from the government of Mexico to create a colony, using the pretext that it would serve as a fortified frontier, protecting US soil from Indian raids. Back in California, he was put on trial for conducting an illegal war, in violation of the Neutrality Act of 1794. Walker's flag of Nicaragua

Embracing Defeat: Japan in the Wake of World War II (9780393320275): John W. Dower Global Finance at Risk: The Case for International Regulation (9781565846388): John Eatwell, Lance Taylor U.S. trucking funds reach Taliban, military-led investigation concludes According to a summary of the investigation results, compiled in May and reviewed by The Washington Post, the military found “documented, credible evidence . . . of involvement in a criminal enterprise or support for the enemy” by four of the eight prime contractors. Investigators also cited cases of profiteering, money laundering and kickbacks to Afghan power brokers, government officials and police officers. Six of the companies were found to have been associated with “fraudulent paperwork and behavior.” “This goes beyond our comprehension,” said Rep. John F. Tierney (D-Mass.), who last summer was chairman of a House oversight subcommittee that charged that the military was, in effect, supporting a vast protection racket that paid insurgents and corrupt middlemen to ensure safe passage of the truck convoys that move U.S. military supplies across Afghanistan. The military summary included several case studies in which money was traced from the U.S. “It’s still ugly,” the official said.

Mirrors: Stories of Almost Everyone: Eduardo Galeano Eduardo Galeano Eduardo Hughes Galeano (Spanish pronunciation: [eˈðwarðo ɣaleˈano]; 3 September 1940 – 13 April 2015) was a Uruguayan journalist, writer and novelist considered, among other things, "global soccer's pre-eminent man of letters" and "a literary giant of the Latin American left".[1] Galeano's best-known works are Las venas abiertas de América Latina (Open Veins of Latin America, 1971) and Memoria del fuego (Memory of Fire Trilogy, 1982–6). "I'm a writer," the author once said of himself, "obsessed with remembering, with remembering the past of America and above all that of Latin America, intimate land condemned to amnesia. Life[edit] On 10 February 2007, Galeano underwent a successful operation to treat lung cancer.[12] During an interview with journalist Amy Goodman following Barack Obama's election as President of the United States in November 2008, Galeano said, "The White House will be Barack Obama's house in the time coming, but this White House was built by black slaves. Works[edit]

Cornered: The New Monopoly Capitalism and the Economics of Destruction (9780470186381): Barry C. Lynn A Different Kind of War: The UN Sanctions Regime in Iraq (9781845452223): Hans. C. Von Sponeck, Celso N. Amorim Hans von Sponeck Hans von Sponeck After Denis Halliday resigned as UN Humanitarian Coordinator for Iraq in October 1998, von Sponeck took over, heading all UN operations in Iraq and managing the Iraqi operations of the Oil-for-Food Programme.[1] Von Sponeck together with Jutta Burghardt, head of the UN World Food Programme in Iraq, resigned in February 2000 for the same reason as Halliday, to protest UN's Iraq sanctions policy. Von Sponeck and Halliday wrote an article in The Guardian explaining their position, accusing the sanctions regime of violating the Geneva Conventions and other international laws and causing the death of thousands of Iraqis.[4] He was equally critical of the "smart sanctions" policy[clarification needed] a couple years later: "What is proposed at this point in fact amounts to a tightening of the rope around the neck of the average Iraqi citizen. In June 2005 he served as an expert on the World Tribunal on Iraq, convened in the spirit of the Russell Tribunal. Note on name[edit]