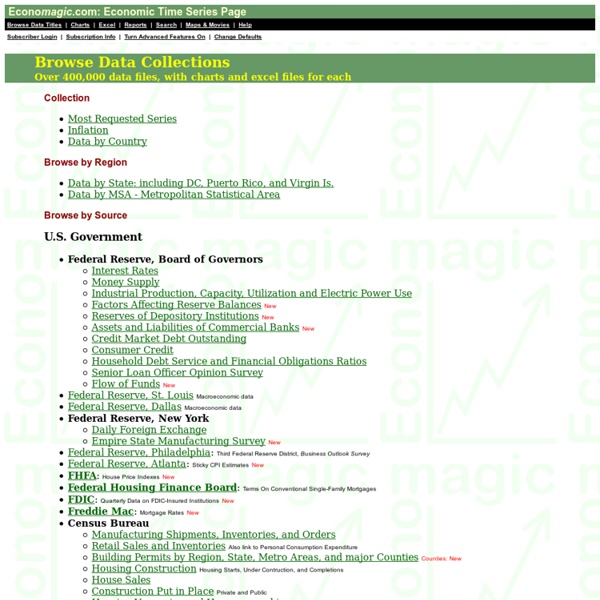 History of Statistics Link to Departmental Home Page Portraits of Statisticians Life and Work of Statisticians Life and Work of Statisticians Bibliographies Group of Thirty The Group of Thirty, often abbreviated to G30, is an international body of leading financiers and academics which aims to deepen understanding of economic and financial issues and to examine consequences of decisions made in the public and private sectors related to these issues. Topical areas within the interest of the group include: The group consists of thirty members and includes the heads of major private banks and central banks, as well as members from academia and international institutions. It holds two full meetings each year and also organises seminars, symposia, and study groups. It is based in Washington, D.C. The Group of Thirty was founded in 1978 by Geoffrey Bell at the initiative of the Rockefeller Foundation,[1] which also provided initial funding for the body.

Consumer Data Consumer Measures Consumer Confidence Index ® 4.0pts Measure of CEO Confidence 3.0pts Economic Calendar: Financial Calendars Calendars: U.S. Earnings | Conf. Calls | Surprises | Splits | IPO | Economic Rice Virtual Lab in Statistics (RVLS) Partial support for this work was provided by the National Science Foundation's Division of Undergraduate Education through grant DUE 9751307. Any opinions, findings, and conclusions or recommendations expressed in this material are those of the author(s) and do not necessarily reflect the views of the National Science Foundation. Last updated: 07/03/2018 19:56:11

The Road to Serfdom The Road to Serfdom is a book written by the Austrian-born economist and philosopher Friedrich von Hayek (1899–1992) between 1940–1943, in which he "warned of the danger of tyranny that inevitably results from government control of economic decision-making through central planning",[1] and in which he argues that the abandonment of individualism and classical liberalism inevitably leads to a loss of freedom, the creation of an oppressive society, the tyranny of a dictator and the serfdom of the individual. Significantly, Hayek challenged the general view among British academics that fascism was a capitalist reaction against socialism, instead arguing that fascism and socialism had common roots in central economic planning and the power of the state over the individual. The Road to Serfdom has had a significant impact on twentieth-century conservative and libertarian economic and political discourse, and is often cited today by commentators.

Finance: Stock market quotes, news, currency conversions & more NPR - 11 minutes ago Delta is the latest airline to face fallout from an on-plane dispute, after a family that was forced off of an overnight flight from Maui to California posted video that saw the crew say agents would put the parents in jail and place their children in ... StreetInsider.com - 6 hours ago

Online Statistics Education: A Free Resource for Introductory Statistics Developed by Rice University (Lead Developer), University of Houston Clear Lake, and Tufts University OnlineStatBook Project Home This work is in the public domain. Therefore, it can be copied and reproduced without limitation. However, we would appreciate a citation where possible. The Theories of John Maynard Keynes ©1996 by Chuck Braman Introduction John Maynard Keynes (b June 5, 1883, Cambridge, Cambridgeshire, eng.—d. April 21, 1946, Firle, Sussex), was an English economist, journalist, and financier.