Air pollution is more dangerous than smoking. Despite public awareness and relentless media coverage, Kathmandu’s air quality has worsened in the past two years. 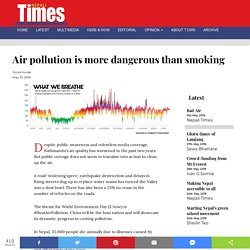 But public outrage does not seem to translate into action to clean up the air. A road-widening spree, earthquake destruction and delays in fixing streets dug up to replace water mains has turned the Valley into a dust bowl. There has also been a 25% increase in the number of vehicles on the roads. The theme for World Environment Day (5 June) is #BeatAirPollution. Trust no one. Photo: Gopen Rai At a time when the four major parties are shaping Nepal’s fate and future by scripting a new constitution, more than half of the population seems to think there is no political leader who is fit to be prime minister. 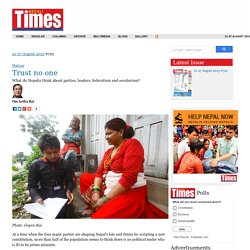 Nearly half the respondents in the Himalmedia National Public Opinion Survey 2015 that polled 3,517 respondents across 35 districts from 3-10 August said none of the political parties can be relied on to build a peaceful and prosperous democratic country. Nepal Earthquakes 2015: Desk Review of Existing Information with Relevance to Mental Health & Psychosocial Support - Nepal. Executive summary Why was this desk review done? 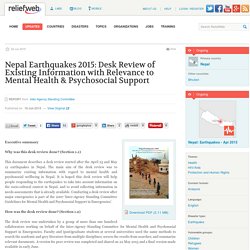 (Section 1.1) 10 charts that capture how Nepal is struggling to survive after the earthquake. Antwerp’s diamond business had long been controlled by its orthodox, largely Hasidic Jewish community. 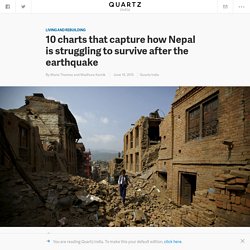 Although 65% of the Jewish population of the city was exterminated during the Second World War, those who had remained, their ranks swelled by others fleeing former Nazi-occupied countries in Eastern Europe, had been able to regain control of the centuries-old diamond trade. In the popular European imagination, diamonds remain inextricably linked with the Jews. When I’d told a group of Julio’s colleagues in Brussels my plans for a story on the Indian community’s role in the trade, they’d expressed surprise. Diamonds? Wasn’t that a Jewish fiefdom? Once upon a time, it had been. Open Mic Nepal. Open Mic Nepal is a project that tracks perception and rumours circulating on the ground among earthquake-affected communities. 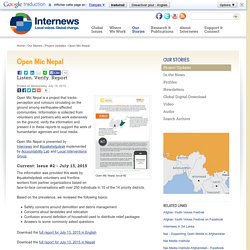 Iinformation is collected from volunteers and partners who work extensively on the ground, verify the information and present it in these reports to support the work of humanitarian agencies and local media. Open Mic Nepal is presented by Internews and #quakehelpdesk implemented by Accountability Lab and Local Interventions Group. Current: Issue #2 - July 13, 2015 The information was provided this week by #quakehelpdesk volunteers and frontline workers from partner organizations based on face-to-face conversations with over 250 individuals in 10 of the 14 priority districts. Based on the prevalence, we reviewed the following topics: Safety concerns around demolition and debris managementConcerns about landslides and relocationConfusion around definition of household used to distribute relief packagesAnswers to some commonly asked questions Download Previous Reports. Npl_eq_snapshot_150707.pdf. UN Digital Repository in Nepal: View Document.

Rasuwa Relief Coordination. How does one assess the structural integrity of a home/building after a huge earthquake (7+ on Richter scale) without having a background in engineering/architecture? - Quora. REACH Resource Centre. Final damage of Nepal Earthquake stands at Rs 706 billion. The final damage and loss count of Nepal Earthquake 2015 stood at Rs 706 billion (US $7 billion), an executive summary of post disaster needs assessment issued by National Planning Commission (NPC) on Friday said. 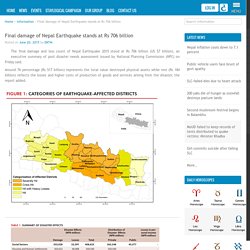 Around 76 percentage (Rs 517 billion) represents the total value destroyed physical assets while rest (Rs 184 billion) reflects the losses and higher costs of production of goods and services arising from the disaster, the report added. 10 charts that capture how Nepal is struggling to survive after the earthquake. DAP-NepalReport-Final-June162015-2mb.pdf. Kathmandu Valley declared ‘Disaster Area’ for a year, some civil rights to be curtailed.

‘Disaster Area’ declared based on Natural Calamity (Relief) Act, 1982Some civilian rights can be curtailed for the period of one yearForeign nationals and agencies may have to take government’s approval to enter for any purposeExtension possible if work not finished or situation not brought under control during the period Nepali students wait for their school bus in front of a collapsed house as thousands of schools across the districts worst hit by two major earthquakes in Nepal reopened Sunday, May 31, 2015, in Kathmandu, Nepal. 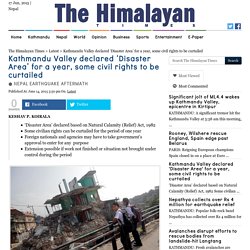 Photo: AP Sports Nadal sent packing at Queen’s, Wawrinka and Murray win Just when it seemed safe for Rafa Nadal devotees t... Fashion Shorn or hairy: Female underarms having a mainstream moment On social media and red carpets, from New York to ... Kathmandu Taking stock of the future of financial sector Having dream is one thing, achieving that dream is... Moreover, the Act allows the authorities to control the foreigners’ entry or mobility in the area. Mofa. Post-Earthquake Relief, Rehabilitation and Reconstruction Measures undertaken by the Government of Nepal June 1, 2015 Post-Earthquake Relief, Rehabilitation and Reconstruction Measures Government of Nepal The devastating earthquake of 7.8 in Richter scale that struck the country with its epicenter at Mandre, Barpak VDC-02, Gorkha at 11:56 am on 2072 Baisakh 12 (corresponding to 25 April 2015) and its frequent aftershocks chiefly the two fatal ones dated 26 April and 12 May 2015 have caused an inconceivable loss of lives and properties. 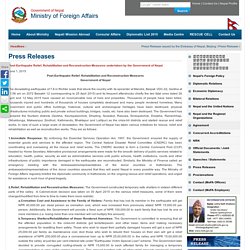 OCHANepalEarthquakeSituationReportNo.20%283June2015%29_Final.pdf. Nepal Earthquake - Humanitarian Data Exchange. How to Rebuild After an Earthquake Like Nepal's. Why did so many buildings crumble in Nepal’s recent earthquakes, even those that were built under modern building codes? 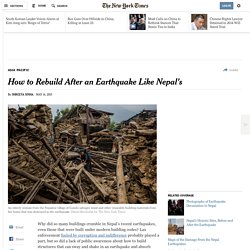 Lax enforcement fueled by corruption and indifference probably played a part, but so did a lack of public awareness about how to build structures that can sway and shake in an earthquake and absorb some damage without collapsing. Nepal is not a wealthy country, and its residents must rebuild with whatever materials are available to them — reinforced concrete in the cities, fieldstone and bricks in the countryside. Even so, there are ways to build in an earthquake-prone area that can make homes less likely to fail.

For those living in remote, inaccessible regions, however, some of these steps may be impractical. Mr. “Our people are building their homes themselves,” Mr. National Information Centre of Earthquake Engineering - IIT-Kanpur-INDIA. The Republic Day earthquake of 26 January 2001 in Gujarat clearly demonstrated the earthquake vulnerability profile of our country. 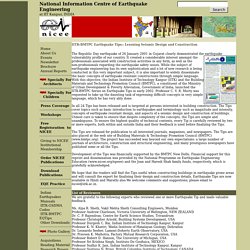 It created a considerable interest amongst the professionals associated with construction activities in any form, as well as the non-professionals regarding the earthquake safety issues. While the subject of earthquake engineering has its own sophistication and a lot of new research is being conducted in this very important subject, it is also important to widely disseminate the basic concepts of earthquake resistant constructions through simple language. With this objective, the Indian Institute of Technology Kanpur (IITK) and the Building Materials and Technology Promotion Council (BMTPC), a constituent of the Ministry of Urban Development & Poverty Alleviation, Government of India, launched the IITK-BMTPC Series on Earthquake Tips in early 2002. Professor C. In all 24 Tips has been released and is targeted at persons interested in building construction. Building blocks of rebuilding.

Replacing bricks with alternatives that are safer, cheaper, cleaner and faster to build One of the looming challenges in post-earthquake Nepal has been, and will continue to be, reconstruction of the estimated 600,000 homes that were destroyed. There are many rebuilding methods that have been proposed using mud, bamboo, and even empty beer bottles. Across the 14 hardest hit districts many who lost their homes are already salvaging bricks and roofing material to rebuild their houses before the rains. In the longer-term, there is expected to be a trend towards reinforced concrete structures since most such buildings survived the quake, while the mud mortar and brick buildings collapsed. Nepal: Building earthquake-proof homes from local materials - BBC News. Nepal quakes: Could the country learn lessons from India? - BBC News. Rescue and Relief Operations. Rescue and Relief Operations. Choosing Shelter Plans. Earthbag is an inexpensive building method that can work well with many available resources.

This guide explains how to choose simple plans that use locally available materials and can fit a culture as well as resist hazards well. Shelters for Hazardous Areas. OCHANepalEarthquakeSituationReportNo.19(29May2015).pdf. National Seismological Centre. Nepal Earthquake 2015. Email List Sign-up for Shelter Cluster Nepal The Shelter Cluster would like to advise our partners that due to the flight cargo delays, the cluster pipeline is currently unable to attend to all the requests for Shelter/NFI items received from partners.

Until the flight delays and the pipeline matters are resolved, the Cluster would like to encourage partners to look into direct material imports or local procurements in line with the technical guideline. Abari Adobe and Bamboo Research Institute. Glacier change in the Everest region. 27 May 2015 By Joseph Shea A new open-access paper on modelling glacier change in the Everest region is now out in The Cryosphere ( and a press release from the EGU about the paper can be found here ( The paper, written by an international team of researchers, presents the first detailed modelling study of all glaciers in the Dudh Koshi basin in the Everest region of Nepal. This blog post aims to provide a bit of background on modelling glaciers and glacier change, explain the methods we used, and discuss the main results.

Figure 1: Dudh Koshi Basin, Nepal Himalaya (Google Earth). The building blocks of reconstruction. Replacing bricks with alternatives that are safer, cheaper, cleaner and faster to build One of the looming challenges in post-earthquake Nepal has been, and will continue to be, reconstruction of the estimated 600,000 homes that were destroyed. There are many rebuilding methods that have been proposed using mud, bamboo, even empty beer bottles. Across the 15 hardest hit districts many who lost homes are already salvaging bricks and roofing material to rebuild their houses before the rains come. In the longer-term, there is expected to be trend towards reinforced concrete structures since most such buildings survived the quake, while the mud mortar and brick buildings collapsed. Mikeldunham. Earthquake Resistant Earthbag Building Guidelines PDF.

Earthquake resistant earthbag building guidelines are now available for free in a new PDF. Earthen buildings are strong in compression, but need help against tension or bending stresses. HumanitarianResponse. Logistics_cluster_nepal_services_overview_150515.pdf. Nepal Earthquake - Fact Sheet #16 Fiscal Year (FY) 2015 (as of May 22, 2015) - Nepal. Nepal earthquake: Before and after - BBC News. Nepal earthquake: Before and after - BBC News. USGS says predicting earthquakes impossible, scientists have no way of knowing when the next one will strike-WNews. Aftershock-statistics.

Alternative Energy Promotion Centre (AEPC) Who's doing What, Where and When (4W) Knowing Who is doing What, Where and When (4W) is a critical element to help coordination of relief efforts during any humanitarian crisis. Such information can help to alliviate duplications, identify possible gaps, better inform decision makers, and allow everyone to ask better questions. Late last night, the humanitarian clusters consolidated their respective data and kindly submitted everything to OCHA. With that data, OCHA then created an 18 page inter-cluster 4W (see below for the first page). MapAction is busy at work creating one map per cluster per district which can help with understanding operational presence and on-the-ground coordination. Below are other interesting products that have been added to the Nepal HumanitarianResponse.info site in the past 24 hours that we thought you might find interesting.