Useful Online Calculators For Almost Every Educational and Life Need 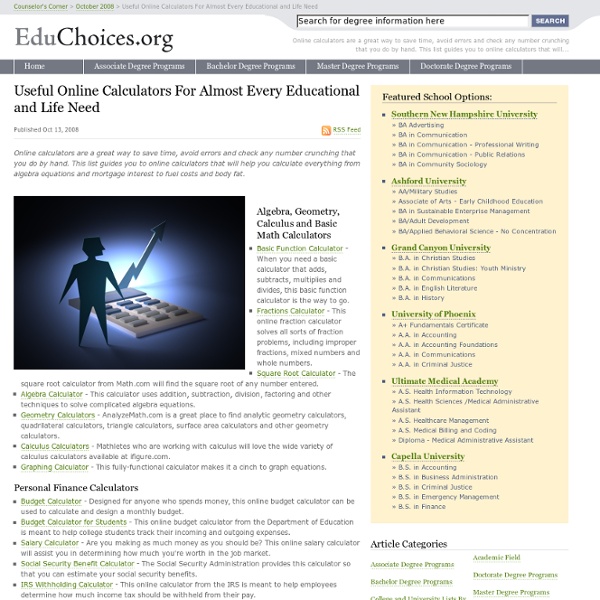 My daily schedule:: time management Review how you spend your time in order to help you prioritize your goals and objectives. This exercise may help: How did you do? Continue with the time management series: Time management | My daily schedule | My weekly schedule | Scheduling your school calendar | My goals | Organizing my tasks | Creating to-do lists | Avoiding procrastination | Developing self-discipline Text of the exercise: (See also the Text/Java version) Determine how you spend a "typical" 24-hour day:Enter the hours or parts of hours for each activity, the total is 24 hours!

Fallacy List 1. FAULTY CAUSE: (post hoc ergo propter hoc) mistakes correlation or association for causation, by assuming that because one thing follows another it was caused by the other. example: A black cat crossed Babbs' path yesterday and, sure enough, she was involved in an automobile accident later that same afternoon. example: The introduction of sex education courses at the high school level has resulted in increased promiscuity among teens. 2. example: Muffin must be rich or have rich parents, because she belongs to ZXQ, and ZXQ is the richest sorority on campus. example: I'd like to hire you, but you're an ex-felon and statistics show that 80% of ex-felons recidivate. 3. example: All of those movie stars are really rude. 4. example: What's the big deal about the early pioneers killing a few Indians in order to settle the West? 5. 6. example: Either you favor a strong national defense, or you favor allowing other nations to dictate our foreign policy. example: It’s not TV. 7. 8. 9. 10. 11.

P-III autopsy & Sciency stuff For teaching a course I needed to take a closer look at a CPU. I asked around and got my hands on an old P-III Coppermine that was about to get thrown out. I’ll start with a disclaimer: I know virtually nothing about CPUs, so if I claim something to be true, it probably isn’t. The first challenge is to get the actual silicon processor chip off of the plastic bonding board. Click images for full-size. The blue part in the middle is the actual Si chip. Back side of the circuit board containing the CPU. I figured I should be able to remove the chip by heating it. A saw comes in handy sometimes... Below you can see the result. A piece of the processor chip came off. This is the piece that came off. Now the interesting part begins. This is a piece of the processor. Looking closer, we start seeing some structure inside the holes. A processor contains many layers of metal leads in order to connect the transistors at the surface of the silicon chip into useful units. Focus is on upper layer.

Shoe Lacing Methods Mathematics tells us that there are more than 2 Trillion ways of feeding a lace through the six pairs of eyelets on an average shoe. This section presents a fairly extensive selection of 50 shoe lacing tutorials. They include traditional and alternative lacing methods that are either widely used, have a particular feature or benefit, or that I just like the look of. 50 Different Ways To Lace Shoes Criss Cross Lacing This is probably the most common method of lacing normal shoes & boots. Over Under Lacing This method reduces friction, making the lacing easier to tighten and loosen plus reducing wear and tear. Gap Lacing This simple variation of Criss Cross Lacing skips a crossover to create a gap in the middle of the lacing, either to bypass a sensitive area on the instep or to increase ankle flexibility. Straight European Lacing This traditional method of Straight Lacing appears to be more common in Europe. Straight Bar Lacing Hiking / Biking Lacing Quick Tight Lacing Ukrainian Lacing- New!

Scientists extract images directly from brain Researchers from Japan's ATR Computational Neuroscience Laboratories have developed new brain analysis technology that can reconstruct the images inside a person's mind and display them on a computer monitor, it was announced on December 11. According to the researchers, further development of the technology may soon make it possible to view other people's dreams while they sleep. The scientists were able to reconstruct various images viewed by a person by analyzing changes in their cerebral blood flow. Using a functional magnetic resonance imaging (fMRI) machine, the researchers first mapped the blood flow changes that occurred in the cerebral visual cortex as subjects viewed various images held in front of their eyes. Subjects were shown 400 random 10 x 10 pixel black-and-white images for a period of 12 seconds each. For now, the system is only able to reproduce simple black-and-white images. "These results are a breakthrough in terms of understanding brain activity," says Dr.

15 Free Guides That Really Teach You USEFUL Stuff Advertisement Over the past months, we’ve written quite a few PDF manuals for you, on all kinds of diverging subjects, including BitTorrent, iTunes, iPhone, Twitter, Mac, Linux, Photoshop and several other topics. Freely available to MakeUseOf subscribers, there are now multiple manuals released every month, for everyone to enjoy. Enjoy! Do us a favor by sharing those manuals friends! 1 – Internet Guide for the Movie Addict Written by Saikat Basu, this entirely free PDF production will show you anything you’ve ever dreamed about knowing related to movies on the web. Original Post | Download NOW 2 – Internet Guidebook for An Audiophile In forty pages, Will Mueller from tells you all you need to know about free internet listening to music, streaming audio to your computer, and free download music sites to get all your favorite songs and albums in a whim. Original Post | Download NOW 3 – The Incredible Free Manual for Every Mac User Original Post | Download NOW Written by Stefan Neagu.

How can I find out which graphics card I have in my PC? - SketchUp Help SketchUp is a graphics-heavy program. Knowing your graphics card can help you troubleshoot odd visual behaviors or recommend a good-performing card to other users. The easiest way to find your graphics card is to run the DirectX Diagnostic Tool: Click Start.On the Start menu, click Run.In the Open box, type "dxdiag" (without the quotation marks), and then click OK.The DirectX Diagnostic Tool opens. Click the Display tab.On the Display tab, information about your graphics card is shown in the Device section. You can see the name of your card, as well as how much video memory it has. If you're experiencing odd visual behavior in SketchUp, our Blurring/distorted images article may help you understand and resolve the problem.