The top 100 sites on the internet 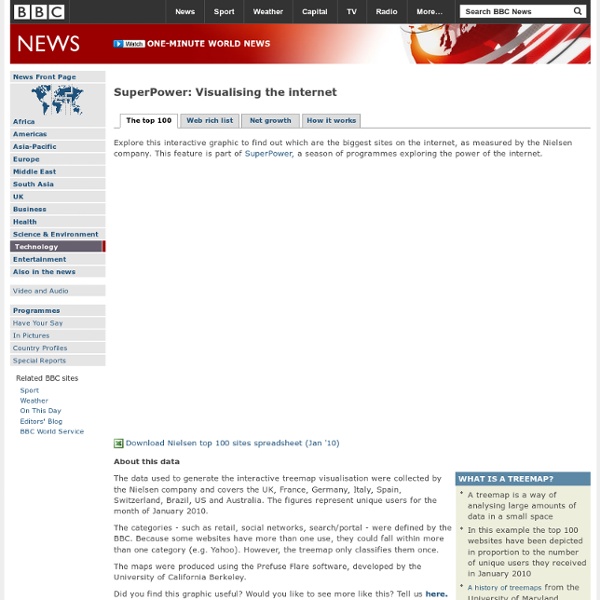 Explore this interactive graphic to find out which are the biggest sites on the internet, as measured by the Nielsen company. This feature is part of SuperPower, a season of programmes exploring the power of the internet. About this data The data used to generate the interactive treemap visualisation were collected by the Nielsen company and covers the UK, France, Germany, Italy, Spain, Switzerland, Brazil, US and Australia. The figures represent unique users for the month of January 2010. The categories - such as retail, social networks, search/portal - were defined by the BBC. The maps were produced using the Prefuse Flare software, developed by the University of California Berkeley. Did you find this graphic useful?

Social Fans More Likely to Buy Social media marketers looking for an indication that their efforts are helping the bottom line will be encouraged by findings from Chadwick Martin Bailey and iModerate that social friends and followers feel more inclined to purchase from the brands they are fans of. More than one-half of Facebook fans said they are more likely to make a purchase for at least a few brands, and 67% of Twitter followers reported the same. The power of earned media gives a further boost to brands: 60% of respondents claimed their Facebook fandom increased the chance they would recommend a brand to a friend. The researchers also explored why social media users become brand fans. The findings are largely in line with previous research about what social followers want, but the results changed when Chadwick Martin Bailey asked respondents about why they had first decided to follow brands, and allowed them to choose as many reasons as they liked. Keep up on the latest digital trends.

help Basics What is reddit? reddit is a source for what's new and popular on the web. Users like you provide all of the content and decide, through voting, what's good and what's junk. Links that receive community approval bubble up towards #1, so the front page is constantly in motion and (hopefully) filled with fresh, interesting links. What does the name "reddit" mean? It's (sort of) a play on words -- i.e., "I read it on reddit." What is that alien / bug thing? That adorable and informative creature is Snoo, the mascot for the reddit community. Yes — all you need is an account! How is a submission's score determined? A submission's score is simply the number of upvotes minus the number of downvotes. Why does a dot sometimes show up where the score should be? For the first few hours after a submission is created, the score is not displayed. I made a mistake in my submission title, how can I edit it? Submission titles cannot be edited. What is that number next to usernames? Yes! Yes. Many do. Here.

Smartphone sales doubled in Q3, Android boomed Worldwide smartphone sales almost doubled to 80.5 million units in this year's third quarter, with Android coming from nowhere to take 25.5% of the market with 20.5m sales, according to Gartner. In the same quarter last year, smartphone sales were 41.1m units, and Android sold 1.4m units for a market share of 3.5%. Android has now overtaken Apple's iPhone and looks likely to overtake the market leader, Symbian. In 21010 Q3, Gartner credits Symbian with 29.5m units and a market share of 36.6%, down 8 percentage points on last year. Sales of Windows Mobile smartphones fell from 3.26m to 2.25m units and market share collapsed from 7.9% to 2.8% while Microsoft prepared to abandon the system for Windows Phone 7. Android is benefiting from global adoption of different models by different carriers, and from its extending price range. Roberta Cozza, principal research analyst at Gartner, says: Smartphone sales still accounted for just 19.3% of overall mobile phone sales.

interessante ferramenta de liberdade. Wikileaks 7 December 2010Last updated at 18:19 By Jonathan Fildes Technology reporter, BBC News Wikileaks has established a reputation for publishing sensitive materials Whistle-blowing website Wikileaks has dominated the news, both because of its steady drip feed of secret documents, but also because of the dealings of its enigmatic front man Julian Assange. The recent release of thousands of sensitive diplomatic cables is just the latest in a long list of "leaks" published by the secretive site, which has established a reputation for publishing sensitive material from governments and other high-profile organisations. In October the site released almost 400,000 secret US military logs detailing its operations in Iraq. They followed hot on the heels of nearly 90,000 classified military records, which gave an insight into the military strategy in Afghanistan. A US military analyst is currently awaiting trial, on charges of leaking the material along with the cables and military documents. Legal wrangles

The Blogger Template Designer We’ve added a fair bit to Blogger over the years, but one thing that’s been constant for some time has been our collection of templates. While a number of talented designers around the web have offered their own fresh and interesting designs that you can apply to your Blogger blog, our stock set has grown a bit stale, and you’ve noticed. You let us know — in the forums, on Twitter, sitting next to us on airplanes, even from across the counter at a Harvard Square stationary store, and we’ve been listening. Today we’re taking a big first step in improving not just our template designs, but all the ways that you can customize the look and layout of your blog. We even made a video with jaunty music to show it off: Hundreds of background images and patterns from iStockphoto, the leading microstock image marketplaceTry it Now Go to to log in to Blogger in Draft. You can use the live preview to see your new template without affecting your blog. Get Involved

Google struggles with social skills | Digital Media Google has decided that its social-networking strategy could use a few more followers. Perhaps no one did a better job of capturing the Internet from its inception until, say, 2007, than Google. But over the last several years, an explosion in Web content generated by social media has created a new dimension of the Web that Google doesn't control--and sometimes can't even see. Google CEO Eric Schmidt used to think that Google could index the Web by 2300, but he told CNET last year that with the advent of social media, "I'm not even sure it's possible" to capture everything. Forces outside of Google are shaping the social-media landscape, and not because Google does not grasp the opportunity but because it has yet to articulate a winning strategy. "Google's decided that social is one of its big focuses for 2010, and it's very natural, as the Web is going social," Smarr said in an interview with CNET. Google and social So what is Google doing about it? "It's a little fuzzy.

e-Mail Usage - Death January 20, 2011 Email Evolution: Web-based Email Shows Signs of Decline in the U.S. While Mobile Email Usage on the Rise Growing Number of Communication Channels Prompts Shift in Consumers’ Email Behavior RESTON, VA, January 20, 2011 - comScore, Inc. “Digital communication has evolved rapidly in the last few years with an ever-increasing number of ways for Internet users to communicate with one another,” said Mark Donovan, comScore senior vice president of mobile. Web-based Email Declines, Young Users Show Most Dramatic Decrease in Usage An analysis of web-based email trends revealed that fewer Americans visited web-based email destinations and spent less time doing so versus last year. *Web-based email does not include email applications such as Outlook, etc. An analysis of email users’ demographic characteristics revealed that young users, those between the ages of 12-17 showed the sharpest decline in usage during the past year. In contrast, usage increased among those 55 and over.

Brasil, Web e crescimento This week the BBC World Service's Digital Planet programme is in Brazil. Here the programme talks to a typical net user to get a sense of what Brazilians do online. There is no doubt that the web has caught on in Brazil as its web-using population has doubled in just three years. In July 2008 more than 23.7 million Brazilians went online according to figures gathered by web statistics firm IBOPE/NetRatings. The figure is up 28% on the same time in 2007 and continues the trend of booming net use. Proof that it has caught on can be seen in statistics which suggest Brazilians spend the longest time surfing from home than any other nationality. IBOPE/NetRatings figures, based on sampling home net use habits, shows that Brazilians spend, on average, 24 hours 54 minutes online per month. By contrast, North Americans spend 20 hours 30 minutes and Germans 21 hours browsing the web every month. Surfing Japanese So popular that they are springing up in underground stations and fast food restaurants.

10 Essential Design Tools for Social Media Pros This series is supported by Wix.com, an online design tool that enables you to create your own Flash websites, social network layouts, and more, for free. Learn more about Wix here. Good design is a critical part of any web or social media presence. Whether you're a professional designer or an armchair artiste, tools abound that you can use to snazz up your web presence, and give it that polish that professionals, potential customers, and online friends have come to expect from a social media maven. 1. In days of old, the software powerful enough to create and edit high quality graphics was expensive — and it still is, if you must have the name-brand products. But if you're open to experimentation and perhaps a bit of digital quirkiness, there are free, open source alternatives to some of the staples of the digital design tool set. 2. If you're a creative person, there's no better way to improve your craft than by getting social. Like any social network, the value is in sharing. 3. 4. 5.

How internet-based music services make their money Online music services generate revenue through a combination of download sales, advertising and subscription. Since the launch of Apple's iTunes in 2003, digital music has become big business. A number of new music services have sprung up on the internet, offering legitimate opportunities for people to listen to or buy tracks online. With the government's digital economy bill threatening heavy action against persistent piracy, legal music services are hoping to increase their appeal. But digital music is still not the road to riches for musicians. "Bands should not be under the illusion that they can plan a tour of (say) North America based on digital revenues," says Will Page, Chief Economist at PRS for Music. "What digital can provide, though, is new information on where demand is, and more options on how you want to distribute your content. The three main ways of accessing music legitimately online are through streaming, downloading or subscription services.