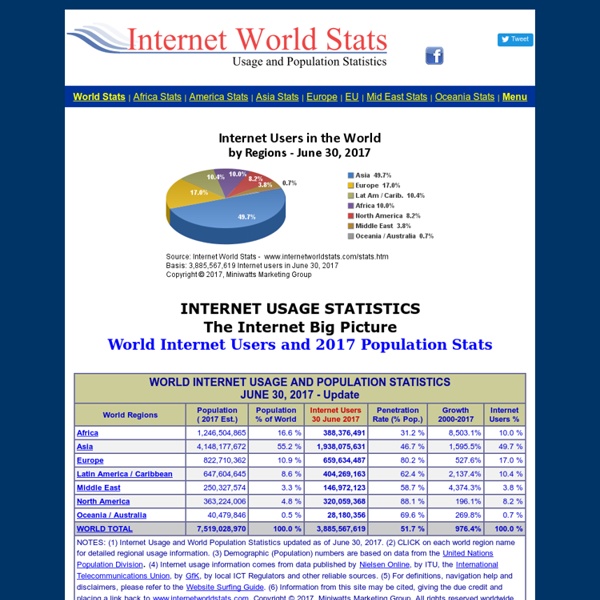 NOTES: (1) Internet Usage and World Population Statistics are preliminary for Dec 31, 2014. (2) CLICK on each world region name for detailed regional usage information. (3) Demographic (Population) numbers are based on data from the US Census Bureau and local census agencies. (4) Internet usage information comes from data published by Nielsen Online, by the International Telecommunications Union, by GfK, local ICT Regulators and other reliable sources. (5) For definitions, disclaimers, navigation help and methodology, please refer to the Site Surfing Guide. (6) Information in this site may be cited, giving the due credit to www.internetworldstats.com. Copyright © 2001 - 2015, Miniwatts Marketing Group. All rights reserved worldwide.

Data Mine Rechercher Data Gemfév. 28, 2012 | Share Smartphones Surpass Feature Phones to Gain Traction Among Early Majority 2011 saw smartphones surpass feature phones to account for majority of new device purchases across several markets in 2011. Germany, France, Italy, Canada, and the U.S. all saw smartphones achieving this milestone, joining the UK and Spain which passed this threshold in 2010.

Key Findings from U.S. Digital Marketing Spending Survey, 2013 Marketing leaders have secured bigger budgets to define markets and attract, acquire and retain customers. Yet, increased funding is a double-edged sword. It brings new opportunities but puts more pressure on marketers to deliver and prove a return on the investments. Use our seven key findings to benchmark your marketing budgets and review our recommendations to enhance your digital marketing efforts.

What Seed Financing Is For Marc Andreessen posted a tweetstorm last week and he talked about how to think about seed financings and how they lead into Series A and Series B rounds. Feature request for Twitter: Please make it possible to permalink to and embed a tweetstorm. You can call this the @pmarca feature.

How Big is the Internet? Over 13 years ago, we released a study that revealed search engines were missing the vast majority of content online in a portion of the Internet called the Deep Web. The study titled, “The Deep Web: Surfacing Hidden Value” revealed that the estimated size of the Deep Web was 400-500 times larger than that of the Surface Web and only .03% or 1 in 3,000 Web pages were actually being indexed by a traditional search engine. A lot has changed in the way the Web works in the last 13 years, so much in fact, that it has become near impossible to replicate the 2001 study because of the sheer size of the Web. In today’s blog post, we are going to take a look at why it’s now become impossible to accurately answer the question: ‘How big is the Internet?’ The Infinite Web We often receive outreaches from customers, media, and simply interested individuals requesting information on how big the Deep Web and Internet are.

How the Big Banks stack up on Facebook, Twitter Social media is gaining traction in the financial services industry. Even the big banks are showing an eagerness to explore Web 2.0 technologies. Here, FierceFinance presents the social media activity of some of the major players on Wall Street. The sad truth about today's Internet population Posted in Tech blog on September 18th, 2009 by Pingdom The world isn’t a fair place, and yet another way this is laid bare is the huge differences shown in Internet penetration among the population of the various world regions. We thought it would be interesting to see what kind of an effect this is having on the world Internet population of today. First some quick observations before we head on to more charts, just to give you an idea of how level the playing field is NOT:

20th WCP: What Is Information? In the books and papers on brain science, cognitive science, etc., one of the most frequently used terms is information. We are told that brains and their various subunits — down to the level of a single neuron — process information, store it, retrieve it, transmit it, etc. They do, indeed. The point, however, is that we are not told what information is. Perhaps information is meant to be understood in the sense first given by C. Shannon? Master iOS Design Master iOS Design is unlike any other iPhone design course you will come across. While most courses just jump straight into Photoshop or Sketch, Master iOS Design starts with the fundamentals of design. As the course progresses you will start to see how these different design principles get applied across a number of different applications. @makerscabin what a GREAT course you made!