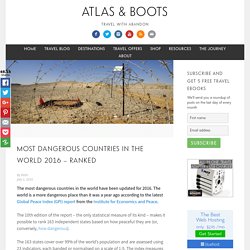 The world is a more dangerous place than it was a year ago according to the latest Global Peace Index (GPI) report from the Institute for Economics and Peace. The 10th edition of the report – the only statistical measure of its kind – makes it possible to rank 163 independent states based on how peaceful they are (or, conversely, how dangerous). Timeanddate.com. WorldTimeZone - Current time around the World and standard world time zones map of the world- 12 format. Timeline of Worldwide School Shootings.

List of urban areas by population. This is a list of contiguous urban areas of the world ordered according to population as of 2013/2014. 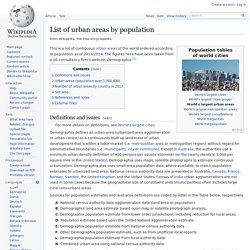 The figures here have been taken from a US consultancy firm's website, Demographia.[1] Definitions and issues[edit] Sources for population estimates and land area definitions are coded by letter in the Table below, respectively. A: National census authority data agglomeration data (land area or population). B: Demographia land area estimate based upon map or satellite photograph analysis. C: Demographia population estimate from lower order jurisdictions, including reduction for rural areas. 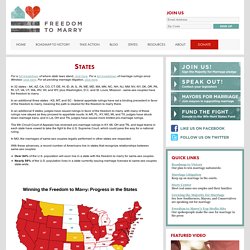 For a full breakdown of marriage rulings since Windsor, click here. For all pending marriage litigation, click here. In 32 states - AK, AZ, CA, CO, CT, DE, HI, ID, IA, IL, IN, ME, MD, MA, MN, NC, NH, NJ, NM, NV, NY, OK, OR, PA, RI, UT, VA, VT, WA, WV, WI, and WY, plus Washington, D.C. and St. Louis, Missouri - same-sex couples have the freedom to marry. In an additional three states - KS, MT, and SC - federal appellate rulings have set a binding precedent in favor of the freedom to marry, meaning the path is cleared for the freedom to marry there. By the numbers: U.S. war veterans.

American troops storm the beaches of Normandy, France, on June 6, 1944. 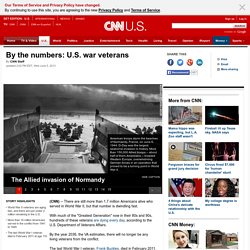 D-Day was the largest seaborne invasion in history. More than 150,000 Allied troops -- about half of them Americans -- invaded Western Europe, overwhelming German forces in an operation that proved to be a turning point in World War II. U.S. troops wait to disembark a landing craft on D-Day. American troops help their injured comrades after their landing craft was fired upon. Allied forces secured the beaches at a cost of about 10,000 casualties. French commandos equipped with bicycles disembark from their landing craft after Allied forces stormed the Normandy beaches. The British Army's 50th Infantry Division lands on beaches in Normandy.

An aerial view shows 32 intentionally sunk American merchant ships that served as a breakwater as well as anti-aircraft platforms. Traffic builds up on the beach and on the road leading to Le Hamel, France, during the landing of the 50th Infantry Division. Here's a Map of the Countries That Provide Universal Health Care (America's Still Not on It) - Max Fisher. 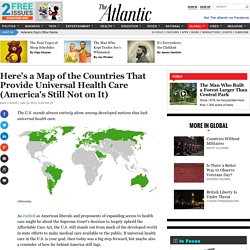 (Wikimedia) As excited as American liberals and proponents of expanding access to health care might be about the Supreme Court's decision to largely uphold the Affordable Care Act, the U.S. still stands out from much of the developed world in state efforts to make medical care available to the public. If universal health care in the U.S. is your goal, then today was a big step forward, but maybe also a reminder of how far behind America still lags. The above map shows, in green, countries that administer some sort of universal health care plan. Most are through compulsory but government-subsidized public insurance plans, such as the UK's National Health Service. All Time Worldwide Box Office Grosses.

Related:  USEFUL,USEFUL   -  everything else   -  Timeanddate.com   -  WorldTimeZone - Current time around the World and standard world time zones map of the world- 12 format   -  Education   -  Enterprise