Countries with absolute Christian majority (50%+) #Religion #World. Great sign in the Hamburger Factory - a bell rings and applause given when a new baby is added to Iceland's population total! @RayburnEdu. In this 1901 UK Census entry, Simeon uniquely and heartwarmingly ensured his wife was noted as "beloved". The most common causes of death in the US. Don't forget that what they want us to be afraid of is the least of our worries. This graph is reality.

Currently, it takes less than a week to add a million people to the Earth's population. That's 80 million a year - an extra Germany... In 1950 many, many people died young. In 2100 people around the world will live longer, and there will be fewer babies than today. #Dataviz from @TheEconomist summarizes the popular UN global population projections until 2100. Nice and clear work. *****How the world's population has changed and where it's going #dataviz. *****By 2060, this country will have the world's largest population (incl animated chart of top populations) In the 1950s the world looked very different. 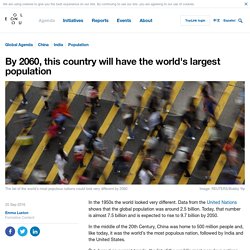 Data from the United Nations shows that the global population was around 2.5 billion. Today, that number is almost 7.5 billion and is expected to rise to 9.7 billion by 2050. In the middle of the 20th Century, China was home to 500 million people and, like today, it was the world’s the most populous nation, followed by India and the United States. But, based on current trends, the list of the world's most populous nations could look very different by 2060. This animation, created by Aron Strandberg, uses UN data to show the population growth of the 12 most populous countries between 1950 and 2060.

Image: Aron Strandberg Over the past half century, China has remained in the top spot, but it is expected to be overtaken by India in 2022. In 2020, India is predicted to have over 1,383,000 million citizens, compared to China’s 1,402,000 million. *****The 5 countries with the biggest populations, in 1950 and 2060 (incl animated chart of top populations) Animation by @aronstrandberg compares population of young #Egypt with aging #Russia from 1960 to 2060. Roy White, 2 years old. Occupation, "Mischief." I hope he never changed professions. (1880 census) Is the world getting dangerously fat? Reaching the UN target for halting the rise in obesity rates by 2025 is impossible, according to new research. 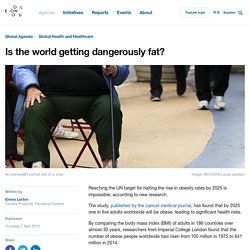 By comparing the body mass index (BMI) of adults in 186 countries over almost 30 years, researchers from Imperial College London found that the number of obese people worldwide had risen from 105 million in 1975 to 641 million in 2014. Women are more likely to be obese, with the study finding 375 million obese women in the world in 2014, compared to 266 million obese men. “Over the past 40 years, we have changed from a world in which underweight prevalence was more than double that of obesity, to one in which more people are obese than underweight,” said senior author Professor Majid Ezzati.

The World Health Organisation (WHO) defines obesity as abnormal or excessive fat accumulation that presents a risk to health. BMI is often used to determine overweight and obese adults. What are the risks of obesity? Archaeogeneticist pinpoints Indian population origins using today's populace: Scientists have identified migrating humans from Africa, Iran and Central Asia over a period of 50,000 years. In addition to its vast patchwork of languages, cultures and religions, the Indian Subcontinent also harbours huge genetic diversity. 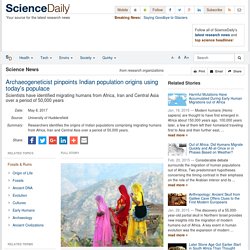 Where did its peoples originate? This is an area of huge controversy among scholars and scientists. A University of Huddersfield PhD student is lead author of an article that tries to answer the question using genetic evidence. A problem confronting archaeogenetic research into the origins of Indian populations is that there is a dearth of sources, such as preserved skeletal remains that can provide ancient DNA samples. *****Baby boomers: US age pyramid becomes a rectangle by 2060. #OnThisDay 1971: Spare a thought for the poor forgotten residents of Castle Road. The pincode to open the world is 1114. The mid 1880s birth and death rate of the British Isles. There are some rather striking contrasts... Ironically the #populationpyramid = like a #nuclear #mushroomcloud in this #Berlin #infographic of #wwii destruction.

China & India population pyramids, 1992-2050. Understand this chart and you understand the numerical claims population projections are actually making. The incredible change in Britain's population over the past thousand years. The population structure of Japan, 1990-2050. Martial status by age for men and women. Today's data treat in @Australian CC @BernardSalt @Daniel_Sankey. *****Demography of USA: If The United States were 100 people... So... Europe looks to be disappearing. Good stuff from @simongerman600. The cost of #war in one simple graph. Life Expectancy changes between 1950 - 2100, my 1st tests with #gganimate #rstats #clunky Sharing the code soon Cc @drob @tjukanov @hrbrmstr. *****China and India demography 2001-2050. *****World population by region from 1950 to 2100 (animated chart). CC @BernardSalt @Daniel_Sankey @CodyPhelan. Today in Ladybird 20 Mar 1345 According to scholars, The Plague is created from “triple conjunction of planets in 40th degree of Aquarius"

BBC Radio 4 - In Our Time, The Black Death. #Map shows median age by country. Central #Africa is youngest region on the planet. #Japan and #Europe the oldest. Wonderful animation from the king of big picture data @MaxCRoser plots mean years of schooling and child mortality. 10 March 1801. Britain's first National Census began. A census has taken place every 10 years since, except 1941, due to WW2.

Today in Ladybird 13 Feb 1832 the first appearance of cholera in London. Population tends to grow faster in countries with high rates of child mortality. Here, evidence from the cross-country correlation over time. #Demography 101: Median age by country in OECD. #Japan #Germany oldest. #Mexico #Israel youngest. How to grow old like an athlete. *****People In Order: 1. Age. *****Natalie Time Lapse: Birth to 10 years old in 1 minute 25 sec. This #USA election was one of the last with a majority white population. #Map teaches us that the #USA is made up of ten units of #Canada. BBC Radio 4 - The New World, It's the Demography, Stupid! ***The perception gap: how well do you know your country? Take our quiz.

The breakdown Overall, people in the Netherlands, the UK and South Korea are the best informed among the countries where all the survey's questions were asked. 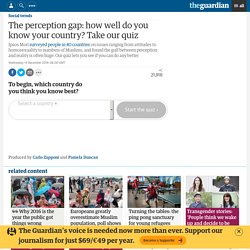 The Hispanic paradox: scientists finally find out why Latinos age more slowly. Why do Hispanic people live longer than other races in the United States? 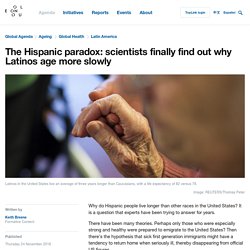 It is a question that experts have been trying to answer for years. There have been many theories. Perhaps only those who were especially strong and healthy were prepared to emigrate to the United States? Then there's the hypothesis that sick first generation immigrants might have a tendency to return home when seriously ill, thereby disappearing from official US figures. Now, however, it has been shown that the real answer is much simpler: Latinos just age more slowly. Taking an age According to the Centers for Disease Control and Prevention, Latinos in the United States live an average of three years longer than Caucasians, with a life expectancy of 82 versus 79.

At any age, healthy Latino adults face a 30% lower risk of death than other racial groups, according to a 2013 study in the American Journal of Public Health. Image: US Centers for Disease Control and Prevention. Roughly... Today in Ladybird 14th December 1861 Prince Albert dies, aged 42.. 1981 vs 2011: Marital status by age group in #Australia. We enter #marriage later and #divorce more often. Growing old: European Population Pyramids - Views of the World. Pictures that explain things, part 7. The population of China. (Of course, this was 1978. It's doubled since then)

Over the last 150 years life expectancy doubled. What a time to be alive... An astonishing number of people make you who you are today. Watch Humans Conquer the Planet In 6 Minutes - D-brief. When humans first emerged from Africa 200,000 years ago, we weren’t much more than slightly brainier hominids. 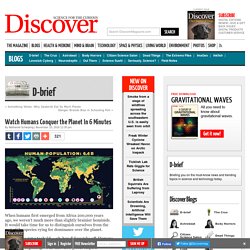 It would take time for us to distinguish ourselves from the rest of the species vying for dominance over the planet. But once we got a toehold — oh, boy did we take off. Humans leveraged a few key innovations — fire, weapons, agriculture — into the beginnings of an unrivaled global empire. *Infant mortality over time (1950 - 2015) The Facebook generation: how growing up online shapes their lives. Over-populated or under-developed? The real story of population growth. Global population hit 7.3 billion midway through 2015, an increase of 2 billion since 1990. 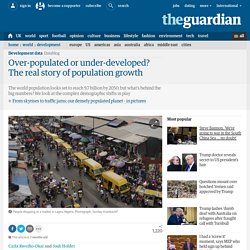 It will continue to climb steadily, according to forecasters, reaching 8.5 billion in 2030, 9.7 billion in 2050, and 11.2 billion in 2100. But there is more to the population story than unprecedented numbers. The rate of growth is continuing to slow – the overall growth rate has been falling since the 1970s – and demographics are shifting. Life expectancy at birth in Europe (2015)

Ireland population pyramid (animated) Animation: 100 Years of the Most Populous Countries. “I think ageing demographics is a bigger issue in China than people think. 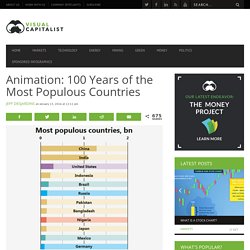 And the problems it creates should be become evident as early as 2016.” – Stan Druckenmiller, a 2013 quote Over the last year, we’ve been very skeptical of the near-term potential for robust global economic growth. The media narrative throughout 2015 was that U.S. rates were on the rise, and that the American economy would finally normalize post-crisis. Stock and real estate prices reached record highs on this optimism, and many pundits expected growth and interest rates to return to more traditional levels.

Birth rate, crude (per 1,000 people) Interactive workbook: How Much Has the Population of Each State Changed Since 2010? Australia's demographics. When it comes to analysing economic trends, demography is often overlooked. 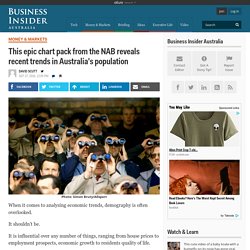 It shouldn’t be. It is influential over any number of things, ranging from house prices to employment prospects, economic growth to residents quality of life. And that list just scratches the surface. It is an important factor, often predicting trends well before they are seen in other hard economic data. In Australia, demographics has started to take more prominence in the economic and political debate, boosted by well-documented concerns surrounding housing affordability in the nation’s largest cities, slowing migration levels and an increasingly aging population. For all the discussion over what particular component drove GDP growth over any given quarter, the truth is that population growth has been a major factor behind Australia’s near-unprecedented run of 25 years of uninterrupted economic growth. Population growth. How United States population fits into India. By 2060, this country will have the world's largest population. Girls Delivering Ice, 1918. 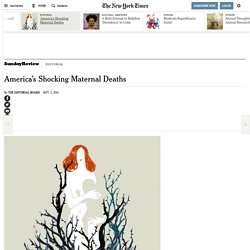 The United States — and particularly Texas — is a glaring exception. In Texas, for instance, according to a study in the journal Obstetrics & Gynecology, the maternal mortality rate doubled from 17.7 per 100,000 live births in 2000 to 35.8 in 2014. Compare that with Germany, which had 4.1 deaths per 100,000 live births in 2014. Deaths registered in England and Wales - Office for National Statistics. There were 529,655 deaths registered in England and Wales in 2015, an increase of 5.6% compared with 2014. Age-standardised mortality rates (ASMRs) increased in 2015 by 5.1% for females and 3.1% for males; a change to the general decrease in rates in recent years.

In 2015, mortality rates for respiratory diseases (including flu) increased notably for both males and females. Cancer was the most common broad cause of death (28% of all deaths registered) followed by circulatory diseases, such as heart disease and strokes (26%). CDRC Maps. European Demography 2016. 167 years of the US age demographic in one chart. We live in a world where people are living longer and the global demographic is changing. But what does this change actually look like?

Reddit user Stephen Holzman wondered the same, and put together this visualization showing the US age distribution from 1933-2100. It offers a new way to understand an ageing population, putting into just a few seconds the long-term demographic changes going on around us. Population Pyramids of the World from 1950 to 2100 — PopulationPyramid.net. Animated age pyramids from 1990-2050 for different countries [OC]