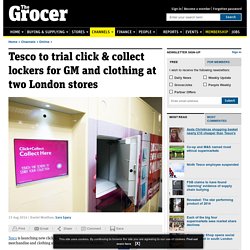 Lockers have been installed at the retailer’s Yiewsley superstore and Orpington Extra sites to make it quicker for shoppers to retrieve their orders than the current process at the customer service desk. Tesco said the current average collection time from the desk was two minutes - the lockers would reduce this to 20 seconds, it claimed.

The lockers would also be more convenient, the retailer added, as shoppers would no longer be restricted to collection times when the customer service desk was staffed - typically 8am to 8pm. Orpington is open 24 hours and Yiewsley from 7am to 11pm. Shoppers will have 14 days to retrieve their order. “We’re always trying to make life easier for London customers,” said Andrew Yaxley, MD of Tesco London. 15_52_52_417_George_event_slides_11_May_2012. It's fashion, darling. Supermarkets are now challenging - and beating - High Street stalwarts when it comes to clothes sales. 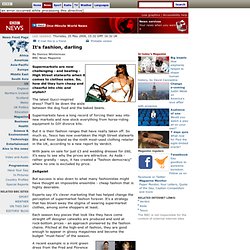 So, how did they turn cheap and cheerful into chic and stylish? The latest Gucci-inspired dress? That'll be down the aisle between the dog food and the baked beans. Supermarkets have a long record of forcing their way into new markets and now stock everything from horse-riding equipment to DIY divorce kits. But it is their fashion ranges that have really taken off. With jeans on sale for just £3 and wedding dresses for £60, it's easy to see why the prices are attractive. Zeitgeist. Tesco's F&F flagship sticks to supermarket chic. OPINION_It has finally happened. 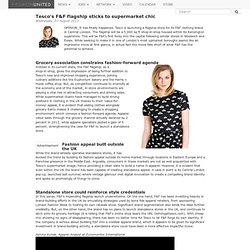 Tesco is launching a flagship store for its F&F clothing brand in Central London. The flagship will be a 5,000 sq ft shop-in-shop housed within its Kensington superstore. This will be F&F's first foray into the capital following similar stores in Woolwich and Essex. Close up: James Brown, head of clothing, Sainsbury's. A perfect fit? Tesco has joined battle with Asda in the supermarket clothing market. 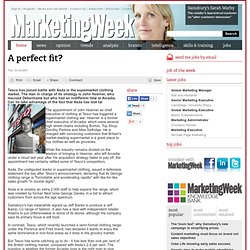 The man in charge of its strategy is John Hoerner, who rescued Debenhams but who had an indifferent time at Arcadia. Can he take advantage of the fact that Asda has lost tal The appointment of John Hoerner as chief executive of clothing at Tesco has triggered a supermarket clothing war. Hoerner is a former chief executive of Arcadia, which owns several high street chains including Burton, Top Shop, Dorothy Perkins and Miss Selfridge. Supermarket fashion. 18 February, 2011 | By Gemma Goldfingle Grocers already take close to a 10% share of the UK’s clothing market and it’s a trend that’s growing, with Morrisons finally set to enter the fray Subscribe to Retail Week to read this article and 40,000 others like it for less than £1 a day Get expert retail news and analysis Access unique tools and valuable resources Arrive at every meeting fully briefed Find the subscription that best suits you Buying more than 1 subscription? 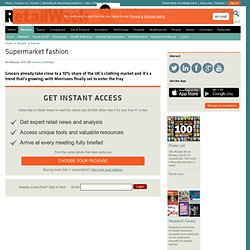 Subscribe for less than £1 a day and get immediate online access. Choose your package Corporate buyer? Sainsbury's steps up supermarket clothing battle. John Reynolds interviews Glen Tooke on how supermarkets are facing up to the fashion fight. Lidl, which has mounted an effective challenge in the UK food market, is now hoping to achieve the same in clothes with the launch of its first female fashion range. 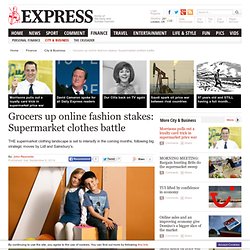 It includes shirts at £5.99 and leather jackets at £14.99. Sainsbury's, meanwhile, is also upping the ante, selling its Tu fashion brand online, as it looks to transform it from a £740million-a-year brand into a £1billion blockbuster. Buying clothes from a supermarket is now an established and growing part of the weekly shop, with sales up 30 per cent between 2008 and 2013, according to retail analyst Conlumino. High street retailers: winners and losers. Morrisons Verdict: Loser. 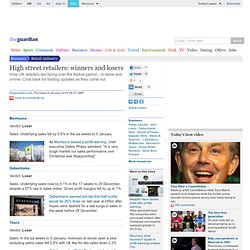 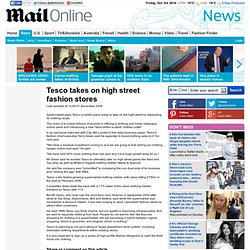 The chain is to invest millions of pounds in offering a clothing and home catalogue, online sales and introducing a new "store-within-a-store" clothes outlet. In an exclusive interview with City AM, London's free daily business paper, Tesco's fashion chief executive Terry Green said he expected to boost clothing sales to £1bn next year. Supermarkets sweeping clean. The days when supermarkets would sell nothing but groceries are long gone, with many outlets increasingly depending on the sale of non-food products The supermarket experience has changed significantly in recent years due to aggressive expansion, increased financial backing and the trend towards bigger floor areas. 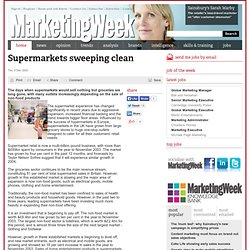 Influenced by the success of hypermarkets in Europe, supermarkets in the UK have grown from large grocery stores to huge one-stop outlets designed to cater for all their customers' retail needs. Supermarket retail is now a multi-billion pound business, with more than &£69bn spent by consumers in the year to November 2003. The market has grown by four per cent in the past 12 months, and forecasts by Taylor Nelson Sofres suggest that it will experience similar growth in 2004. The groceries sector continues to be the main revenue stream, constituting 81 per cent of total supermarket sales in Britain. UK Online Grocery sales up, set to double in 5 years - SEO and organic search news and blog. Ecommerce sales for the grocery market have increased 19% in 2013 compared to the same period last year and are set to double over the next 5. 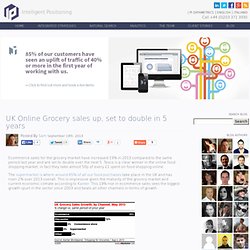 Tesco is a clear winner in the online food shopping market, in fact they take almost 50p of every £1 spent on food shopping online. The supermarket is where around 65% of all our food purchases take place in the UK and has risen 2% over 2013 overall. This is impressive given the maturity of the grocery market and current economic climate according to Kanter. This 19% rise in ecommerce sales sees the biggest growth spurt in the sector since 2003 and beats all other channels in terms of growth.

Supermarket chic: How clothes sales at superstores have grown at more than double the rate of High Street chains as cash-strapped Britons cut spending. Supermarket clothing sales grow 6.2% in a yearMarket as a whole much weaker with growth of 2.7% By Hugo Gye Published: 09:40 GMT, 28 January 2013 | Updated: 13:18 GMT, 28 January 2013. Fashion retailers feel pressure of growth in supermarket sales. Supermarket sales of clothing outgrew traditional fashion retailers in the six months to February, exclusive data from Kantar Worldpanel has revealed.

Total spend for clothing and footwear in the big four supermarkets increased by 8% to £1.5bn in the 24 weeks to 20 February, the data showed. The total market managed growth of just 2% during the same period. Asda's George overtakes Marks & Spencer as Britain's second biggest clothing chain. Supermarket giant Asda has snatched Marks & Spencer’s crown as Britain’s second biggest clothing firm by volume. The Mirror understands its George brand had just over 11% of the market in the six months to July, overtaking M&S on 10.9%. George widened the gap in the last 12 weeks. Primark is the biggest clothing retailer based on the number of items sold. Website: retail economics. Retail Economics - Top 10 UK Retailers. Sainsbury's launches Tu brand online as it plots £1bn fashion business. Sainsbury's ready to compete as it sets £1bn fashion sales target for TU range.